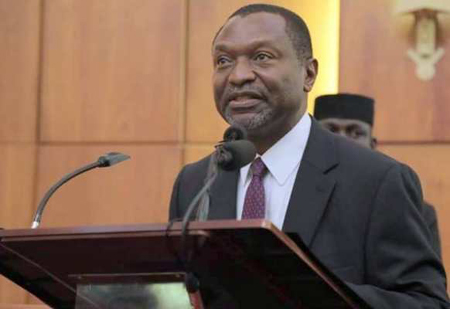 Udoma said this at the end of tenure news conference on Tuesday in Abuja.

The minister said the Executive could not achieve that in its last four years in office.

“I am hopeful that in Mr President’s second term, we might have a situation where the Executive and the leadership of the National Assembly are much more aligned.

“This will help not only to be able to achieve a return to the January to December fiscal year but to have a much smoother budget process,’’ he said.

Udoma, however, said there was no legal requirement for the budget year to run from January to December.

“Also, it will be much easier to track the budget performance if both the recurrent and the capital budgets run from the same dates.

“It is therefore, desirable to return to the January to December fiscal year,’’ the minister said.

According to him, returning the budget to January/ December fiscal year when the operation of the current budget only commenced in June or July is a very challenging assignment.

He said the budget should be delivered to the National Assembly by September in order to achieve a return to a 1st of January commencement date.

“But when you are operating a budget which commenced only in June or July, by September you would have had no idea how the existing budget is likely to perform.

“Indeed, given the procurement process, for a budget which starts running in June or July, there might have been little or no capital releases by September.

“In short, the only way to return to a January/December fiscal year under those circumstances is for there to be agreement.

“There should be agreement between the Executive and the National Assembly to produce a budget on the basis of significant assumptions.

“This will require a very close working relationship of trust and synergy between the two arms of government.

“Unfortunately, we were unable to achieve this in the last four years,’’ he said.

Meanwhile, Udoma said the implementation of the Economic Recovery and Growth Plan (ERGP) resulted in the economy exiting recession in the second quarter of 2017 and returning subsequently to the path of growth.

According to him, most economic indices are showing positive momentum with the implementation of ERGP.

“Starting the year with a GDP growth rate of 2.01 per cent is encouraging because the first quarter of the year often records the slowest growth in GDP.

“The first quarter 2019 result is also encouraging given the fact that this was an election period.

“As you are aware, both domestic as well as foreign investors tend to be a little cautious when elections are imminent, this cautious investor sentiment normally impacts negatively on growth.’’

Udoma said the country having successfully emerged from the elections, expected a post-election dividend as confidence was restored.

He said the President had indicated that he intended to stay focused on the implementation of the ERGP so as to ensure that we could achieve the 3.0 per cent growth target in 2019.

“It is my hope that the seeds we are currently laying will propel us to achieve our seven per cent GDP growth target in the course of Mr President’s second term,’’ he said.

TBI Africa said the News Agency of Nigeria (NAN) reports that the Ministry of Budget and National Planning was created by Buhari in November, 2015 by merging the erstwhile National Planning Commission with the Budget Office of the Federation.

The idea behind the merger was to ensure a strong link between planning and budgeting.

FG hands over 19 concession silos to 6 concessionaires in 18 states, FCT

[…] Find More to that Topic: tbiafrica.com/2019/05/22/budget-cycle-buhari-will-work-to-return-to-january-december-fiscal-year/ […]

Have you ever considered publishing an ebook or guest authoring on other sites? I have a blog based on the same subjects you discuss and would love to have you share some stories/information. I know my audience would appreciate your work. If you’re even remotely interested, feel free to shoot me an email.

[…] Read More to that Topic: tbiafrica.com/2019/05/22/budget-cycle-buhari-will-work-to-return-to-january-december-fiscal-year/ […]