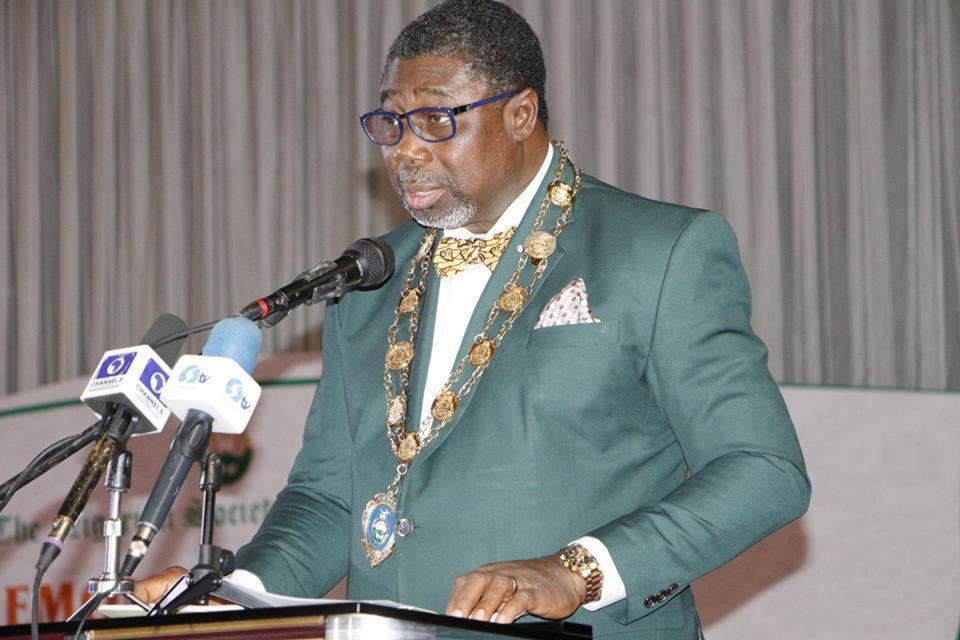 The  Nigerian Society of Engineers (NSE) ,  on Thursday charged environmental engineers to tackle the  challenges of open defecation and indescriminate parking of trucks causing Apapa gridlock and road degeneration.

Its president, Mr Kunle Mokuolu,gave the advice during the inaugural lecture organised by the Nigerian Institution of Environmental Engineers (NIEE) in Lagos.

Mokuolu was represented by Mr Tayo Akintola, the  immediate past chairman of the Ikeja branch of NSE at the lecture.

The president during the inaugural Chief Samuel Fadahunsi Memorial Lecture tagged :  “Liquid Waste Management in Nigeria, the Past, Present and Future” called on government to partner restaurants in  the construction of toilets in public places.

“We should be concerned about the roads and  their usages. What these trailers are doing to our roads in Apapa is like taking their offices to the road and degrading it.

“The NIEE should be involved in bringing order to the environment, if we keep quiet, the masses will suffer,” he said.

Mokuolu called for improvement in recycling to tackle plastic pollution and  that the  NIEE needed to tackle open defecation in Lagos and other states.

“There is the need to control open defecation. NIEE should make it part of its Corporate Social Responsiblity to manage liquid wastes in Nigeria as experts.

“Government should partner with those running restaurants by giving them incentives to build toilets for  more people to use and  thus stop open defecation when they are pressed,” he said.

Also, Mr Tunde Zedomi, a former President of NSE said,  “it is a shame that we are here and Apapa is going down”.

He advised that all hands should be on deck to tackle the environmental degradation.

The guest speaker, Mr Bola Olowe,  also a  past chairman of NIEE, gave  a brief history of the evolution of liquid wastes generated both domestically and industrially within the country.

He said that  previous technologies had failed due to negative attitudes.

He explained that the improper  disposal of domestic and industrial liquid wastes  had compounded pollution.

Olowe urged governments to collaborate on the need to  adop new technologies that would  support  centralised waste management systems.

He called on the Federal and state governments to harmonise all policies and projects toward  the actualisation of short, medium, and long term plans to address the challenges.

He added that liquid waste was a huge cost venture and the  private sector participants should be involved in tackling it.

Olowe  said that the  government  alone could not handle liquid waste management effectively.

“The  Federal G overnment should provide enabling environments for stakeholders to come up with sustainable programmes while state governments should harmonise regulatory functions.

” Government should  look at standardisation within the system as well as  the right kinds of equipment that we need to use in Nigeria.

” Also, it has to provide the right kind of  support for  our universities, researchers and  NGOs so that they can come up with appropriate technologies to handle our liquid wastes in Nigeria, ” he said.

He called for the carving out of waste water zones in various states to address already existing problems of building on sewer lines and other problems.

He advised Lagos and other state governments to embark on urban renewals to tackle liquid ways in already built areas.

The  other speakers at the event  took turns to profer solutions to the challenges affecting  electronics  and liquid waste management in the country which they blamed on wrong lifestyles of Nigerians.

They also emphasised the need for mentorship of young engineers as well as the  development of the lower cadre of artisans to bridge the skill gap in engineering practice.