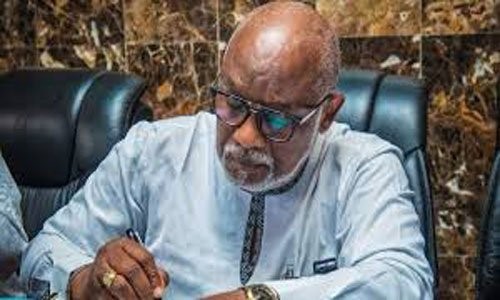 The more you look; the less you see. Thorough probe required

It is obviously a case of the more you look and inquire, the less you see and understand. We refer to the issue of the mystery N4.3 billion reportedly belonging to the Ondo State government just discovered in an alleged secret account of a commercial bank in the state.

The money had allegedly been in the surreptitious custody of the bank for 10 years. Yet, this is a state that, like many others in the country, has been in dire need of funds to meet its immense developmental challenges.

There have been divergent versions about how this account was discovered and what eventually became of the amount in it.

According to the Ondo State House of Assembly, the discovery of the account was contained in a report by the state auditor-general, which stated that the state board of internal revenue had reported the amount as part of the revenue disclosed to the legislature.

However, the commissioner for information, Donald Ojogo, claimed that the account was uncovered as a result of the vigilance and discrete financial intelligence of the commissioner for finance, Chief Wale Akinterinwa, in the course of undertaking a comprehensive inventory of all assets and liabilities of the government.

We find spurious and unconvincing, Mr. Ojogo’s explanation that the finance commissioner carried out his investigation modestly and “without the usual noise” in order to avoid “sensationalism and needless acrimony”.

It is in fact the secrecy with which the executive handled the matter that is sensational and has raised valid reason for suspicion.

No less curious is his commendation of the state’s development partners and banks for assisting in the discovery of the money.

Rather, the state government ought to be querying the affected financial institutions for not intimating it of the account’s existence once the new administration of Mr. Rotimi Akeredolu assumed office in 2017.

Equally baffling is the finance commissioner’s claim that the recovered amount was legally and properly lodged in the coffers of the state and that, contrary to reports, it was duly appropriated by the legislature in the 2019 budget.

If so, how come that the legislature expressed surprise at the discovery of the account and has summoned relevant officials of the executive to provide it with all necessary information on the issue? Chairman of the house committee on public accounts, Edamisan Ademola, told the press that the legislature is interested in the interest generated by the account over the 10-year period and also wants “full details on how the account was being operated over the years; who authorised the opening of the account, who were the signatories and when the account was opened”.

Even more disturbingly, Ademola was further cited as claiming that his committee “discovered that the said money had been transferred from the initial bank to six different state government accounts in less than five months from the period of February 2018 to June 2018”.

It is indeed necessary to know precisely when this account was discovered and if the preceding administration of Dr Olusegun Mimiko had hidden the fact of its existence from its successor, why the inexplicable silence by the present government on the matter? These are all legitimate matters that the house of assembly has said it will investigate and which it has a constitutional responsibility to do thoroughly and diligently in the interest of the people.

We note that the house of assembly has had cause to issue a statement denying speculations that it plans to commence impeachment proceedings against the governor on the issue. Impeachment is surely premature and uncalled-for now.

What is important at this stage is thorough investigation and unearthing of all the facts and the roles played by various individuals and institutions.

Indeed, we doubt if the state legislature has the necessary forensic capacity to do justice to the investigation. Thus, the anti-corruption agencies should wade into the matter.

Credible Elections: The press must put pressure on politicians to get it right –Okowa