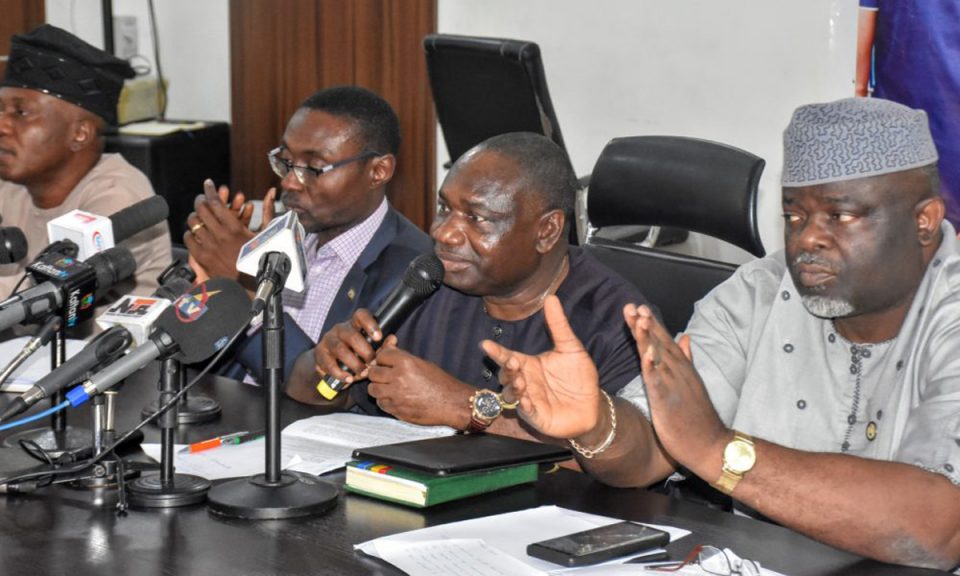 Lagos State Commissioner for Economic Planning and Budget, Sam Egube in company of his counterpart in Information and Strategy, Gbenga Omotoso, at a briefing, spoke on the government’s response to the impact of the coronavirus pandemic and the adjustments being made to the 2020 Budget to the State House of Assembly. Group Business Editor,SIMEON EBULU, who was there, reports.

I have always said that what is about to happen is a combination of a health pandemic and an economic pandemic. Even after COVID-19 is gone, the economic effect of it would always outlive the health effect.

So, in life generally, it is not what you are going through that makes you happy or sad, it is the meaning that your mind attaches to it.

And in Lagos, it appears that in envisioning what we wanted to do, the Governor saw tomorrow. What I mean by that is that there is really nothing that would change in our broad objective. It is just that certain aspects of it has been heightened.

For example, the actions that we would be taking on health, are same actions. It is just that now we must accelerate it because we did not think of COVID-19 when the budget was being planned. As you are aware, the story of COVID-19 started in Wuhan, China.

The implication of that was that factories had to shut down. This lockdown we are seeing now, started much earlier in places like China and Europe. The meaning of it was that once those factories began to shutdown, almost two-thirds of world’s production capacity was shutting down.

Nigeria is import-dependent. So, our manufacturing immediately began to slow down because the slow down also affected the supply chain.

No matter how strong our economy is, even if COVID-19 did not come into Nigeria, we would be unable to produce much if our inputs were not coming in. Now, COVID-19 did another thing – it slowed down movement around world.

Now, when those movements are slowed down, what it means is that the need for energy drops. When that happens you now have nearly a glut in the oil market because the demand for crude oil would go down.

So, the combined effect of all of these was that the Nigerian economy slowed down. Our revenue has dropped and our Gross Domestic Product (GDP) would also shrink.

When we did the financial modelling and worked on the scenarios, even though the World Bank and IMF had said Nigeria’s GDP would go down as much as about 3.6 per cent, for us in Lagos, we felt it would be about three per cent and that for Lagos is equivalent to N2.3 trillion in output loss. That loss has a direct relationship with unemployment.

Of course, when we were preparing the 2020 budget, we didn’t have COVID-19 in mind and not having that in mind meant that we expected that things would be normal. So, we looked at revenue projectionof N1.017 trillion and our budget size was N1.168 trillion.

When we did our first quarter review, things still looked quite firm and despite the challenges, somehow, Lagos was still able to come out with a positive variance on our revenue – about six per cent more than our target. So, we achieved 106 per cent of the expected outcome on our revenue.

Our recurrent expenditure was at 80 per cent target, but our capital expenditure, which has to do with projects largely was at 41 per cent of expectation. That was so largely because the first quarter is a little bit slower.

So, even though we expected a capital to recurrent expenditure of 61:39, what we saw was 44:56. And because we had the money waiting to meet those projects, we had a surplus of N119 billion instead of our planned deficit of N24 billion.

So, we felt that IGR would drop to between 21 per cent and 30 per cent and that would result in shrinkage in the budget.

So, what you would then see is that after a lot of permutations and adjustment, you can see that revenue is dropping by 24 per cent in the proposed budget and we expect the budget size to drop by 21 per cent.

Of course if the revenue drops by 24 per cent and the expenditure drops by 21 per cent, it means it is being covered by an increase in deficit from nine per cent, to 11 per cent. So, we need to adapt going forward. The coronavirus itself is not well understood by scientists.

It was our view that you cannot run the COVID-19 race as if it is a sprint. And we felt that if it is a marathon, lockdown would not be a viable option and therefore we would need to re-imagine what operating in Lagos would look like.

But to do all of that, the first thing to do was to lockdown so that you can first of all assess what is going on and how we intended to proceed.

So, there is going to be a shift and we are proposing to the state House of Assembly, a reduction in our budget from N1.168 trillion, to N920 billion, which is a 21 per cent drop.

If you look at the Lagos State 2020 budget, you will see that the revenue is N1.1 trillion.That is broken down largely into federal transfer of about N185 billion and Internally Generated Revenue of N886 billion.

What that means is that the proportion stimuli that would affect our total revenue is a small portion, which is about 18.5 per cent. The plan was to use N418 billion for recurrent; N711 billion for capital.

So, when we did the first quarter budget review, our target was N267 billion, but we achieved N282 billion, basically six per cent above the expectation.

That happened as a result of our capital receipt and basically because we had our bonds and loans which were budgeted as brought forward for prior year intact and dusted.

However, our IGR did drop because of the headwinds and first quarter federal transfers dropped. Now, the expenditure, on the recurrent side we had almost 80 per cent, but on the capital side it was only about 41 per cent achievement in the drop.

The GDP is what affects us a lot in Lagos. When you look at the correlation between GDP and unemployment, you are then able to put your finger on how GDP affects unemployment. Generally, the income distribution of Lagos is about N46,000 per average for about six million people that are working.

That begins to tell you how revenue would be impacted. And once you do the analysis you will see that federal transfer is going to be impacted by about 30 per cent. But that is 18 per cent of our source of revenue.

When you blend all of this together, what you find is that the real effect on our revenue is 24 per cent drop  and a 21.2 per cent drop on the expenditure side.

So, you have to keep people on their jobs. Even if you send them away, you will still need to be sending palliatives to them wherever they are.

So, we didn’t touch our personnel cost. Overhead is to come down by 20 per cent and capital expenditure came down by 29 per cent and the outcome is the deficit moving from N97.5 billion to N108 billion.

Of course, when you look at the things we are cutting, that is the drop in revenue which is N248 billion, you would be wondering why the deficit is less than N10 billion.

We are aggressive in our health response. We felt we needed to support business and the idea was to use the Lagos State Employment Trust Fund (LSETF) to do some support.

But in the meantime, we are going to allow filing extension so that people would not be under pressure in filing their taxes and then working capital for SMEs.

But going forward, we need to take a very strong approach to the crisis and we need to restart the state economy.

So, our safety commission is doing a lot of work to try and codify what living with COVID-19 in the workplace should look like. Lagos is a service centre and the things that make Lagos bubble are our hotels, our bars, night clubs, restaurants.

Now, if that sector is challenged globally, then you are looking at a challenge in the economy. But beyond that, we also need to re-imagine the way Lagos State would operate going forward.

So, in our area of response, we are going to protect Lagos State food supply. So, we are going to be looking at things around our food production. We are also going to look at how to take care of our vulnerable.

Lagos is a big population and quite frankly, a lot of the people in Lagos are poor. We are going to prioritise our T.H.E.M.E.S agenda. Now, in restarting the economy we feel the focus should be on job creation.

What jobs do is that it stimulates consumption and consumption is what makes production possible. There are sectors that are heavy in terms of job creation, such as SMEs.

Construction is also strong and it has several characteristics. It can employ people and provide a platform for tomorrow’s growth. So, we would be looking a lot at agriculture and we would try to support and retrain our people.

Let’s face it, the way people work would change and so we all need skills that would help us work in the new environment that COVID-19 has created.

So, one of the things COVID-19 will do for us is that we would be like a city that hosted the Olympics or World Cup, it would leave us with infrastructure that are better – our hospitals would be better, our primary healthcare centres would be better for it and our capability to deal with epidemics would be stronger and our health professionals would be more robust, having gone through an experience like this.

But revenue is dropping, so there must be consolidation. You must rationalise your expenditure in favour of your most critical sectors.

7.5% VAT deductions on voice calls is under FIRS, says Minister

High oil revenue did not translate to job creation, reduction of poverty –Buhari