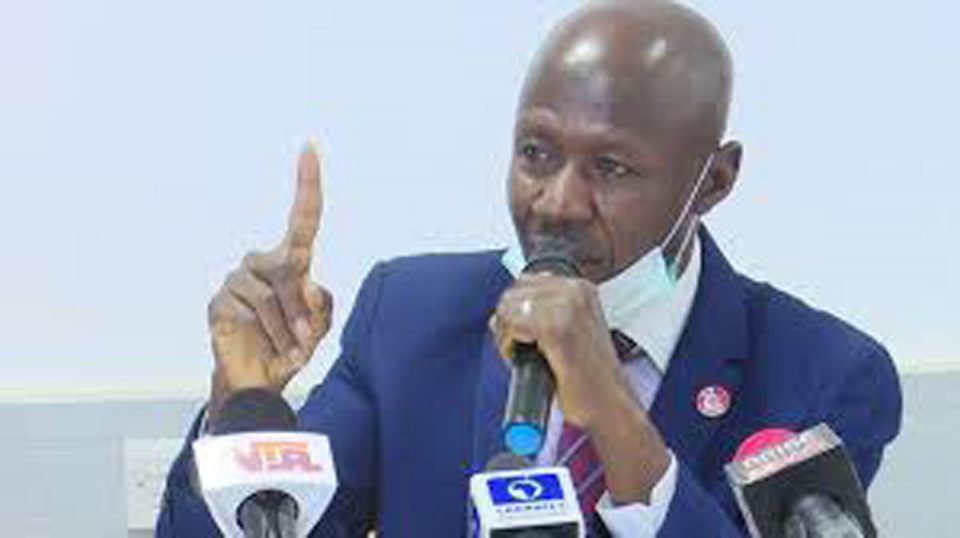 The presidential panel investigating allegations of corruption levelled against the suspended acting Chairman of the Economic and Financial Crimes Commission, Ibrahim Magu, on Thursday quizzed the EFCC Secretary, Olanipekun Olukoyede, and some directors of the commission.

The PUNCH gathered that the EFCC officials were asked questions about the allegation of diversion of recovered funds levelled against Magu.

It was learnt that top officials of the EFCC were invited to either corroborate or fault some explanations Magu had made before the panel.

The suspended EFCC boss has been in the police detention since Monday when he was arrested in front of the old EFCC headquarters on Fomella Street, Wuse 2, Abuja and forced to appear before the presidential panel at its sitting in the old Banquet Hall of the Presidential Villa, Abuja.

The suspended EFCC boss was subjected to several hours of interrogation on  Monday, Tuesday and Wednesday by Justice Ayo Salami-led panel.

He was asked to respond to 22  allegations levelled against him by the Attorney-General of the Federation and Minister of Justice, Abubakar Malami (SAN), in his memo to the President, Major General Muhammadu Buhari (retd.).

Besides alleged diversion of recovered loot, Magu was accused of selling or mysteriously releasing about 157 oil tankers seized in Port Harcourt without following due process.

Also, a report by the Auditor-General of the Federation last year alleged  that about N13.96bn recorded  as salaries and wages in the consolidated financial statement of the EFCC were not in the anti-graft agency’s trial balance submitted for reconciliation

On Thursday, Magu spent 12 hours before the presidential panel.

After the interrogation, Magu was again driven back to the Force Criminal Investigation Department, Garki, where he spent the fourth night in police custody.

Magu arrived at the Aso Villa Banquet Hall as early as 9am according to his lawyer, Tosin Ojaomo.

The suspended EFCC boss was subsequently brought before the panel led by Salami, and the Deputy Inspector-General of Police, FCID, Mike Ogbezi.

A source at the panel said the directors who were quizzed by the panel, absolved themselves of involvement  in funds diversion.

A senior Ministry of Justice official said Magu did not seek the approval of the President and the supervising Minister of Justice and Attorney-General of the Federation.

The authorities were said to have got wind of Magu’s plan and immediately nicked it in the bud.

The source stated, “Apart from courting trouble by attempting to probe NSA Monguno, Magu was also disrespectful to the Inspector-General of Police, Mohammed Adamu, who accused him of insubordination. This is why no one is pleading for him because his cup is full. His attempt to probe the NSA who was said to be instrumental to his appointment marked the genesis of his troubles.”

Meanwhile, a group of anti-corruption campaigners, Coalition in Defence of Nigerian Democracy and Constitution, on Thursday asked the anti-graft agency to immediately launch a thorough investigation into the relationship between Magu and a former senator, Buruji Kashamu.

Speaking on plans to secure the release of his client, Magu’s lawyer  said he would submit  an application to the police authorities for his release.

He explained that he was unable to see his client on Thursday, despite waiting for hours at the Force Criminal Investigation Department,  Garki.

He said,”I just left the FCID now (8:30pm) having waited endlessly to see Magu, but they had not brought him back from the Presidential Villa. Tomorrow (today), I will file an application before the police authorities for his release,” he stated.

In another interview, he said,  “We are still trying to get him bailed. I was there early in the morning but I was told he had already been taken to the Villa. They have not shown us any remand order. However, I was told that he is being treated decently.

“The problem is that once he is taken from there (FCID) at about 8am, he remains with the panel till evening. The DIG is the one in charge as regards detention and he has the power to approve administrative bail. I have been trying to see him as regards Magu’s case.”

When asked about the status of Magu, Ojaomo responded, “He is in high spirits. I am confident that Magu will emerge victorious.”

The lawyer said he would return to the FCID by 8am on Friday to make a formal application for bail.

“On Friday I will make a formal application for bail.”

Ojaomo rubbished insinuations that Magu could be detained perpetually without a court order because he is a serving police officer.

YOU MAY ALSO LIKE: Magu’s trial and anti-corruption’s incoherent typeface

“Our aim, for now, is just to get him out of there. Every Nigerian has a constitutional right to liberty. Even though what we hear these days is that the police can keep him because he is a senior officer, I do not subscribe to that. He ought to be treated like a Nigerian”, the lawyer said.

Meanwhile, Vice-President Yemi Osinbajo has written the Inspector-General of Police  asking for a probe into the allegation of receiving N4bn from  Magu.

In the letter, sent on his behalf by his lawyer, Prof, Taiwo Osipintan (SAN), the Vice-President urged the IGP to prosecute the alleged accuser, Mr Jackson Ude, for criminal defamation  if  investigations proved his allegation to be false.

Osipitan confirmed to one of  our correspondents that the letter dated July 8, 2020 was delivered at the IGP’s office on Thursday.

“Yes it was delivered at the Inspector-General of the Police this morning,” Osipitan told our correspondent.

The letter was also copied the VP’s office and the office of the Attorney-General of the Federation.

The Senior Special Assistant to the Vice President on Media and Publicity, Laolu Akande, had on Wednesday said there was no truth in the online report that Osinbajo received N4bn from Magu.

The report had claimed that Magu told the presidential panel probing him that he gave Osinbajo N4bn after the vice- president asked him to release part of recovered loot.

According to the  VP’s letter to the IGP on Thursday, Ude is an online journalist who published the allegedly defamatory report on his website, PointBlank News on July 8, 2020.

The VP denied the allegation in the letter.

The letter read in part, “Our instruction is that the above statements published by Mr Ude are false in every material respect and same are designed to injure the reputation of our client.

“Copies of the publications are hereby attached for ease of reference and necessary investigation.

“These vicious and malicious publications are meant to achieve one objective only, to represent to his readership and others (Nigerians and Foreigners) that our client is a dishonest and disloyal public officer and consequently unfit for the position of Vice President of the Federal Republic of Nigeria which he is occupying.”

He, however, urged the IGP to probe Ude’s allegation and if found to be false, the accuser should be prosecuted for criminal defamation in line with sections 391 – 395 of the Penal Code.

The letter stated, “We are of the view that unless an action for criminal defamation is commenced against the said Mr. Jackson Ude, he will continue to use his social media platform to publish materials that are false and criminally defamatory of our Client’s reputation.

“In view of the above, we humbly request that you cause the above allegations, made against our client, to be investigated and if the suggested investigation confirms our complaint of the falsehood of these allegations, to initiate criminal proceedings pursuant to the provisions of Sections 391 – 395 of the Penal Code Act for Criminal Defamation against the said Jackson Ude.”