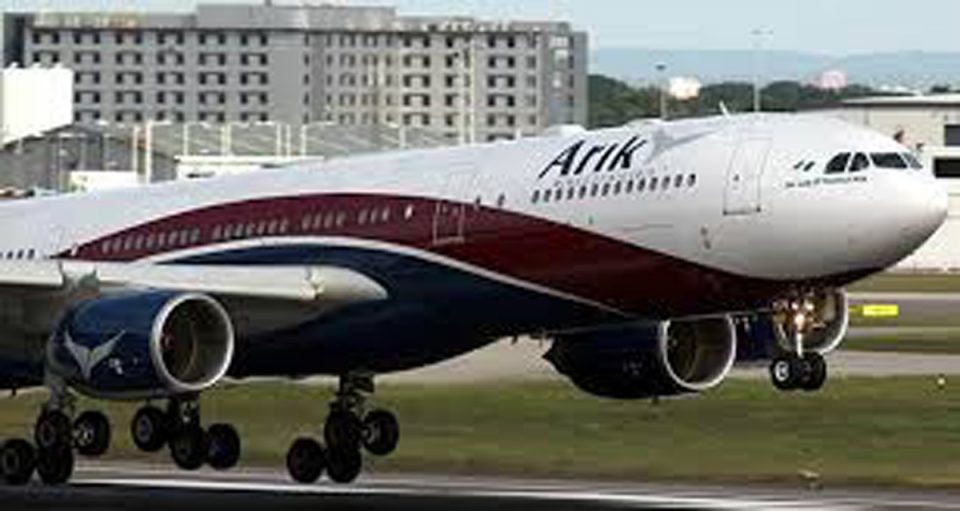 Monday’s shut down of Arik Air’s operations by aviation industry unions may have caused the airline an estimated N50 million in earnings, Daily Sun investigations have revealed. A senior management source had revealed to Daily Sun that the airline operates an average of 28 flights flying a minimum of 2000 passengers on a daily basis.

Using a benchmark minimum of N25,000 per economy flight ticket, the airline total daily revenue would have amounted to a minimum of N50million which was eventually lost to labour’s shutdown.

The unions had earlier given an ultimatum to the management to resolve the issues of salary and severance benefits and open discussions on the conditions of service or face an industrial action.

The shutdown left many passengers of the airline stranded as they could not travel on Monday morning with many visibly angry that they were not informed of the development to enable buy other airlines’ tickets for their travels.

The Secretary General of NUATE,  Ocheme Aba, prior to the shutdown said it became necessary following the refusal of the airline to agree to their demands. He said their demands include payment of the balance of the staff salaries both for those who worked and at home during the period of the lockdown.

According to him, a circular by the Arik Air management informed the staff during the lockdown that only 20per cent of staff were needed at work and promised that the 80 per cent sent on compulsory leave would be paid 20 per cent salaries when those on duty would be paid 50 per cenbt salaries. Aba said the management only paid one month salary and till date, nothing had been paid to both those who were at work and those at home.

“First, these decisions were taken unilaterally and based on labour practice, every decision that would affect  payment of  workers has to be negotiated. There has to be a collective bargaining agreement, that’s the labour and yet they didn’t even keep to that promise. For people who were even coming to work, they were paying them less than 50 per cent of their salaries and the people at home whom they say they were going to pay 20 per cent, they didn’t pay. They paid for only one month and thereafter nothing again till date,” Aba said.

But the airline hit back at the unions, describing their actions as illegal, saying it does not have the backing of the unions whose leadership it said have embraced dialogue by attending reconciliatory meetings called by the Nigerian Civil Aviation Authority (NCAA).

20 ships to discharge petrol, other items at Lagos port — NPA