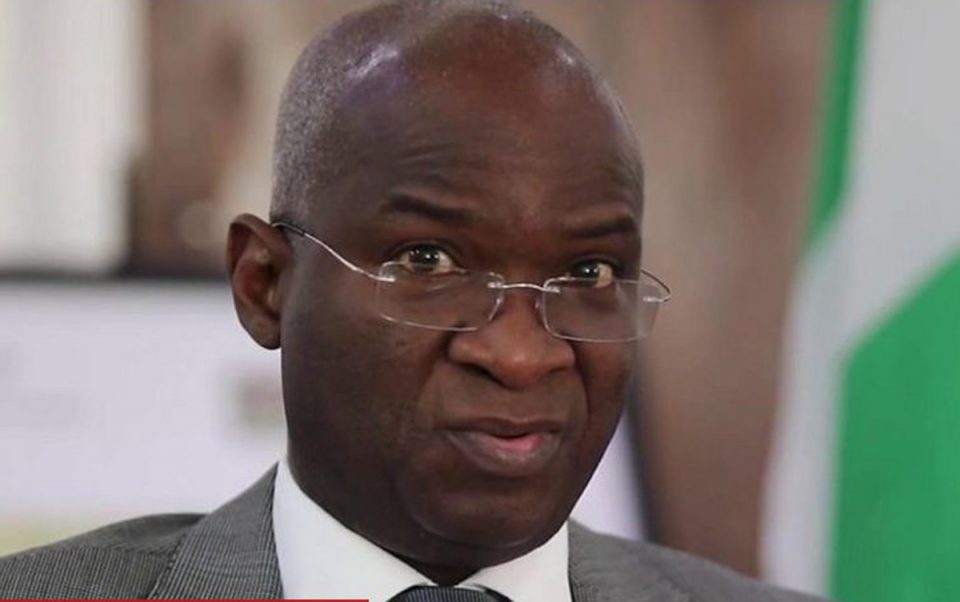 The Minister of Works and Housing, Mr Babatunde Fashola, on Saturday directed trailers parking indiscriminately at Ogere section of the Lagos-Ibadan expressway to immediately vacate the area to give way for ongoing construction works.

Fashola, who undertook an inspection of the road from Lagos, gave the directive during a town hall meeting with stakeholders at Ogere in Ogun State on the Lagos-Ibadan Expressway.

After listening to the submissions of tractional rulers, representatives of the three major tribes, civil society, state government officials, contractors and traffic regulatory agencies, Fashola appealed to the trucks to vacate the highway.

“My appeal to you (articulated vehicles) is for you to the leave the road today immediately,” he said.

Fashola asked the task force on traffic laws newly constituted by Ogun State Government to enforce the directive, noting that parking on the highway was a violation of the nation’s traffic laws.

He said trucking and trailer operations were businesses and operators were supposed to provide parking spaces for their fleet, adding that government’s construction of truck parks were only to assist.

He also frowned at road abuses by truck drivers who pour diesel and petrol on the highway, causing quick road degeneration.

He listed projects funded by the Presidential Intervention Funds to include the Lagos-Ibadan expressway, a major artery connecting South-West to other regions.

He said that the highway was important for interconnectivity and ease of doing business, hence the need for stakeholders’ cooperation and sacrifice to ensure speedy completion of the construction.

He promised Ogun Governor, Dapo Abiodun, that the issue of burrow pits causing flooding would be tackled, while degenerating alternative routes along Ikorodu-Sagamu road construction would be completed.

Burrow pits are places where laterites are excavated for road or building construction.

“The governor and people of Ogun, we hear you very loudly on Ikorodu-Sagamu road. The story is the same with Lagos-Ota Road,” Fashola said.

The minister said that the contractors were back to site on the projects, adding that the Buhari government was determined to complete all ongoing constructions in spite of dwindling oil revenue reducing the nation’s earnings.

Fashola, however, admitted that government was owing contractors on the Lagos-Ota road and other projects.

Julius Berger and RCC, contractors handling sections one and two of the Lagos-Ibadan expressway project, took turns to make slide presentations on how high traffic volume and new settlements on the highway slowed down construction.

They also enumerated their corporate social responsibility programmes to their host communities.

Gov. Abiodun, in his speech, thanked the Federal Government for the progress of work but requested that some roads be handed over to the state government.

He also appealed to the contractors on the Lagos-Ibadan expressway project to adopt best traffic management options to minimize hardship, while calling for more sensitization of the public to help them understand the project.

He listed efforts of the state government to speed up construction, which included a tripartite committee with the Lagos State Government and the Nigeria Ports Authority.

“I must emphasize that we are delighted that this road construction is taking place,” he said.

The Special Adviser to the Lagos State Governor on Works and Infrastructure, Mrs Aramide Adeyoye, thanked Fashola “for the tenacity of purpose to the construction of the road”.

Giving a brief history of previous slow construction of the highway by previous administrations, Adeyoye promised collaboration of Lagos State government with those of Ogun and Oyo to fast track construction.

She said the trailer park problem needed enforcement and could be resolved through determination of all stakeholders.

“All in all, we are having an infrastructure that will work, provided we take ownership,” she said.

Lekki shootings: In hindsight, we would not have acted differently – Nigerian Army