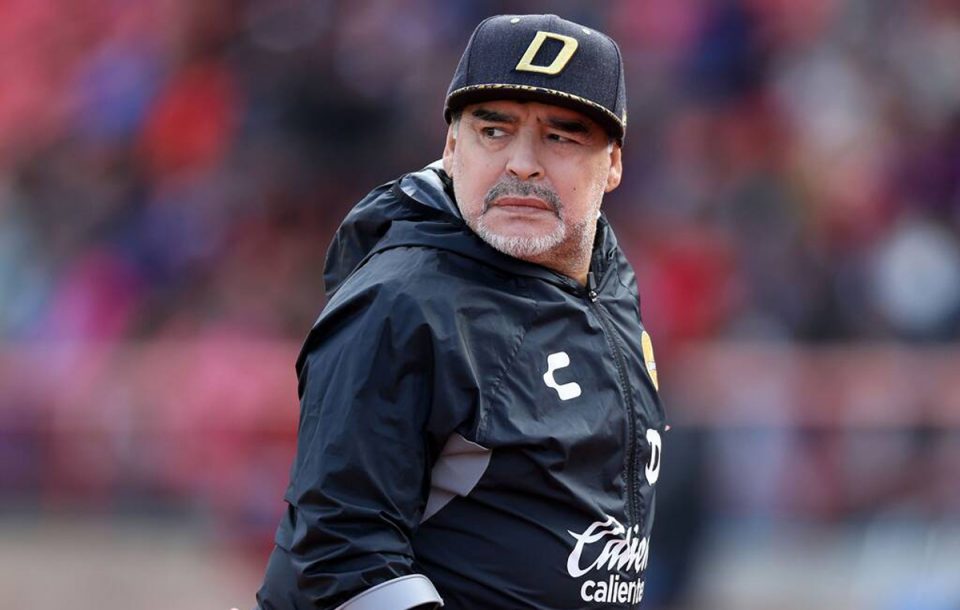 The life of Diego Armando Maradona came full circle on Wednesday afternoon. It was the anti-climax of several months of anxiety over the fate of the 60-year old Argentine football icon whose life was riddled with controversy almost same way as his career as a player or coach.

The former Argentina midfielder and manager had a successful surgery on a brain blood clot early in November. So many of his fans feared he was not like

to pull through as his drug and alcohol abuse were well documented. Surprisingly, the former Barcelona and Napoli star survived and was taken into a rehabilitation centre to cure him of alcohol dependence. After several days with no clear sign of recovery, sun finally set on the life of this colorful footballer who some fans worship like a god, on Wednesday afternoon.

Standing at just 5ft 5in, what Maradona lacked in height, he made up for it with a rugged heart and cunning brain that defied explanation. It still remains a controversy till date who is the better player between him and another South American icon of the game-Edson Arantes do Nascimento who goes by the moniker Pele.

With a rare combination of flair, flamboyance, vision and speed which mesmerised fans, Maradona showed prodigious ability from a young age, leading Los Cebollitas youth team to a 136-game unbeaten streak and going on to make his international debut aged just 16 years and 120 days.

Of course, with his silky skills, agility, vision, ball control, dribbling and passing more than compensated for lack of pace and occasional weight problems.

He brought all this to bear when he led Argentina to victory at the 1986 World Cup in Mexico. The World noticed the arrival of another candidate to contest the ‘King of Football’ title with Pele.

At Mexico ‘86 quarter final clash with England, Maradona proved that a ‘tree can truly make a forest’. He was the Iroko in La Albiceleste squad.

He gave a foretaste of the controversy that would later engulf his life.

With the memories of the Falklands War four years earlier still very fresh in the minds of fans on both divides, the match was more than an ordinary football game. Pride and prestige came into play.

The first 51 minutes of the game was goalless until Maradona conjured that his ‘Hand of God’ goal. Maradona jumped with opposing goalkeeper Peter Shilton and scored by punching the ball into the net. Three Lions players protested but there was no Video Assistant Referee (VAR) technology to help the centre referee to nullify that goal. If that goal was dubious as claimed by former England’s legend, Sir Bobby Robson, Maradona’s second goal was a ‘mystery’.

Maradona’s second goal against England in that quarter final of Mexico ‘86 remains the best in this century.

He collected the ball in his own half before embarking on a bewitching, mazy solo run that left several players trailing before he rounded Shilton to score that second goal to tell the world he has arrived to claim his place in history. Nothing compares to that Maradona goal to date in the history of the World Cup.

England pulled one back but Argentina went through, with Maradona saying it was “much more than winning a match, it was about knocking out the English”.

Maradona’s 34 goals in 91 appearances for Argentina tell only part of the story of his rollercoaster international career. In all, the late Argentine scored 259 goals in 491 matches for both country and clubs.

The effervescent Maradona broke the world transfer record twice – leaving Boca Juniors in his home country for Spanish side Barcelona for £3million in 1982 and joining Italian club Napoli two years later for £5million.

There were more than 80,000 fans in the Stadio San Paolo when he arrived Naples by helicopter. Maradona justified the huge sign on fee as he played the best club football of his career in Italy, feted by supporters as he inspired the side to their first Scudetto (league) titles in 1987 and 1990 and the UEFA Cup in 1989. Suddenly, Napoli that was not amongst the elite rich clubs in Italy, because of Maradona became the cynosure of all from south of Italy.

A party to celebrate the first triumph lasted five days with hundreds of thousands on the streets, but Maradona was suffocated by the attention and expectation.

“This is a great city but I can hardly breathe. I want to be free to walk around. I’m a lad like any other,” he said.

He became inextricably linked to the Camorra crime syndicate, dragged down by a cocaine addiction and embroiled in a paternity suit amongst other cases.

After losing 1-0 to Germany in the final of Italia ‘90, a positive dope test the following year triggered a 15-month ban for Maradona.

He returned and arrested his slide, getting his act together to play in the 1994 World Cup in the USA, but alarmed viewers with a maniacal full-face goal celebration into a camera.

Maradona was withdrawn midway through the tournament after he was found to have taken the banned substance ephedrine.

After his third positive test three years later, he retired from football on his 37th birthday, but continued to be plagued by problems.

Maradona was given a suspended jail sentence of two years and 10 months for an earlier incident where he shot at journalists with an air rifle.

His cocaine habit and alcoholism led to several health issues. He put on weight, rising to 128kg at one point, and suffered a major heart attack in 2004, which left him in intensive care.

He had gastric-bypass surgery to help stem his obesity, and sought sanctuary in Cuba while battling to overcome his drug addiction.

Despite all this, Maradona was named manager of the Argentina national team in 2008 and took the side to the World Cup quarter-finals two years later before his reign ended with a 4-0 defeat by Germany in the quarter-finals.

In the group game with Nigeria’s Super Eagles which the South Americans won 1-0 through Gabriel Heinz’s header, Maradona exhibited clear signs he was not going to make a great manager like did playing the game. His sideline antics and ball reading appears off the mark. These were to become glaring in subsequent jobs he took after the Argentina post.

Various managerial roles followed for a figure who continued to divide opinion, and continued to make headlines.

He needed reconstructive surgery on his lip after one of his pet shar pei dogs bit him, and publicly recognised his son Diego Armando Junior who was born from an extra-marital affair.

He unveiled a banner of himself, danced with a Nigeria fan, prayed to the heavens before the game, wildly celebrated Lionel Messi’s opener, fell asleep and gave a double middle finger salute after Argentina’s second goal.

It was just a matter of time that what Maradona loved most was going to be his undoing and it ultimately extinguished his life candle.

1994: Plays in fourth World Cup but is ejected after positive test

REACTIONS TO DEATH OF MARADONA @60…

Pele, the Brazilian football legend who is considered the only one that comes close to Maradona in terms of skills, was amongst the early set of people to pay tributes to the late Argentine.

“Certainly, one day we ‘ll kick a ball together in the sky above,” observed Pele in a statement made available by Reuters.

In an apparent reference to the ‘Hand of God goal Maradona scored against England’s Three Lions he was part of, Gary Lineker in a Twitter sarcasm said: “Hopefully, He ‘II find comfort in the hands of God.” It was attacked by several Twitter users.

“It is a very sad day for all Argentines and football. He leaves us but he does not go because he is eternal,” said Messi in a tweet.

The government of Argentina has declared three days of mourning for Maradona. President Alberto Fernandez said in a tweet. “You took us to the highest point in the world, and made us immensely happy. You were the greatest of all. Thank you for having been with us, Diego. We miss you all our lives.”

FG committed to elimination of gas flaring by 2021, says Sylva