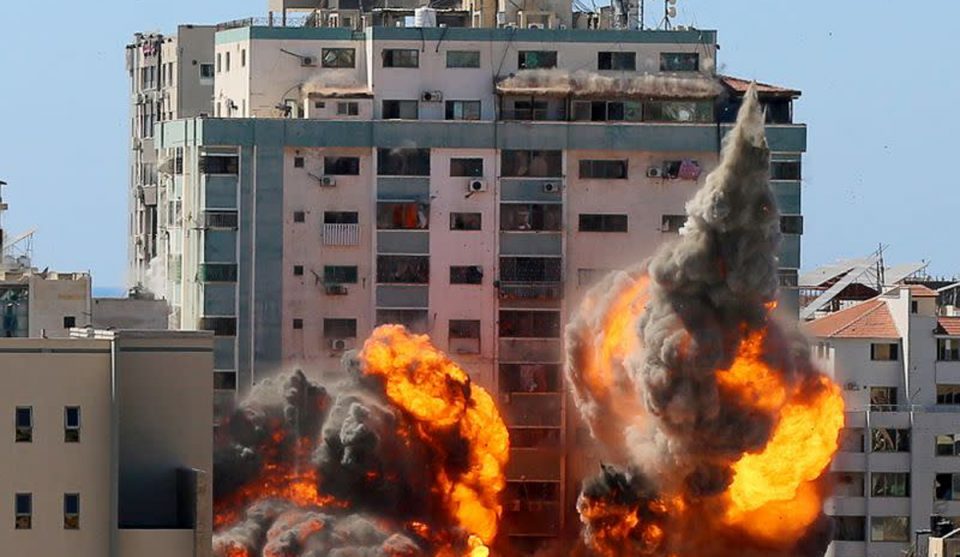 At least 139 people have been killed in Gaza and nine in Israel since the fighting began on Monday, bringing total death to 148.

Israel says dozens of militants are among the dead in Gaza, while Palestinian health officials say nearly half are women and children, according to a British Broadcasting Corporation report

It came after weeks of spiralling Israeli-Palestinian tension in occupied East Jerusalem which culminated in clashes at a holy site revered by both Muslims and Jews. Hamas – the militant Islamist group which rules Gaza – began firing rockets after warning Israel to withdraw from the site, triggering retaliatory air strikes.

On Saturday, an Israeli air strike on a refugee camp in Gaza killed 10 people, while a Palestinian rocket killed a man in Israel.

A separate Israeli strike destroyed a high-rise building housing media organisations, including The Associated Press and Al Jazeera, plus a number of offices and apartments. The Israeli military said the building housed military assets belonging to Hamas.

The demonstration in London has been organised by the Palestine Solidarity Campaign, Friends of Al-Aqsa, Palestinian Forum in Britain, Stop The War Coalition, Campaign for Nuclear Disarmament and the Muslim Association of Britain.

A spokesperson for the organisers said, “It is vital that the UK government takes immediate action.

“It must stop allowing Israel’s brutal violence against and oppression of the Palestinian people to go unpunished.”

Paris police used tear gas and water cannon Saturday to disperse a pro-Palestinian rally held despite a ban by authorities, who feared a flare-up of anti-Semitic violence during the worst fighting between Israel and Hamas in years.

Between 2,500 and 3,500 people converged on the heavily immigrant Barbes neighbourhood in the north of the capital, according to interior ministry figures, amid a massive security presence involving some 4,200 officers.

Police blocked off wide boulevards as well as narrow streets where some of the protesters were forced to retreat, while knots of residents and passers-by watched or recorded the scene with their phones.

Some threw stones or tried to set up roadblocks with construction barriers, but for the most part police pursued groups across the district while preventing any march toward the Place de la Bastille as planned.

Also, thousands of protesters in Jordan, Israel’s eastern neighbour, marched toward the border on Friday morning, chanting slogans in solidarity with the Palestinians and waving Palestinian flags as Jordanian riot police surrounded them.

Thousands of people have marched through central London in support of the Palestinians amid ongoing fighting between Israel and militants in Gaza.

The organisers of the protest called on the UK government to stop allowing what they described as “Israel’s brutal violence against and oppression of the Palestinian people”.

It comes after the worst week of violence in Gaza and Israel since 2014.

Meanwhile, President Recep Erdogan of Turkey has told the President, Major General Muhammadu Buhari (retd.), that he expects Nigeria to show solidarity with Palestinians following the latest attacks by Israel on Jerusalem and Gaza.

Erdogan made the call when he spoke with Buhari on the telephone on Friday.

The Turkish Presidency disclosed this in a message posted on its Twitter handle, @trpresidency.

The Turkish President told Buhari that his country was trying to get the international community to teach Isreal, which he described as “unlawful, unjust and unscrupulous” a lesson.

He expressed the belief that Nigeria will support Palestinians in “this rightful cause.”

“Drawing attention to Turkey’s efforts exerted in order for the international community to teach the necessary lesson to unlawful, unjust and unscrupulous Israel due to its attacks against Palestine, President Erdogan voiced his belief that Nigeria would show solidarity with the Palestinians in this rightful cause.”

Apart from Buhari, reports say Erdogan had also spoken with some other world leaders on the matter.

According to media reports, Israel’s ongoing offensive on Gaza has left 103 dead, including 27 children and 11 wome.

The reports quoted the Palestinian Health Ministry.  Another 580 people were said to have been injured.

In another development, Buhari has reportedly called for greater Turkish humanitarian effort in North East

The Senior Special Assistant to the President on Media and Publicity, Garba Shehu, disclosed this in a statement on Saturday titled ‘In a phone call, President Buhari calls for stronger Nigeria-Turkish ties.’

The statement read, “President Muhammadu Buhari on Friday put a phone call across to his Turkish counterpart, Tecep Tayyep Erdoğan.

“President Buhari, who had fruitful discussions, expressed satisfaction with existing bilateral ties between the two countries and called for greater Turkish participation in the economy and the humanitarian efforts in the Northeast.

Some places for Bitcoin investment in 2021

We will implement FG’s directive on travel ban — Immigration Boss