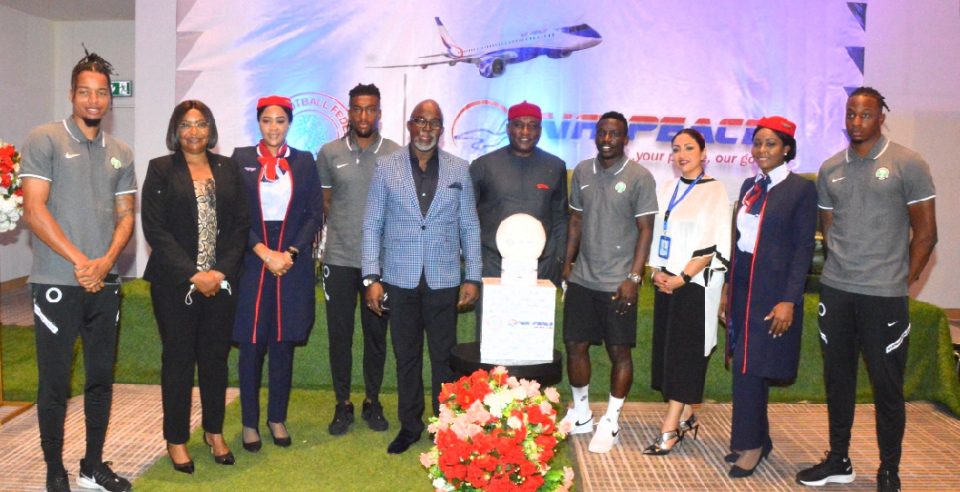 The Nigeria Football Federation on Wednesday sealed a partnership agreement with Air Peace that made the frontline indigenous airline company the Official Airline Sponsor of Nigerian National Teams, and which President of NFF and FIFA Council Member, Mr. Amaju Melvin Pinnick described as “an ordained union of two super brands.”

At a short but impressive ceremony held at the Marriott Hotel, Ikeja, Lagos, Pinnick, and Chairman of Air Peace, Barrister Allen Onyema dwelt on the strength inherent in Nigeria’s diversity, and the opportunities and possibilities flowing in a country of 200 million people with 378 different nationalities, and football as the strongest unifying force.

“Air Peace epitomizes unity, patriotism, humanity, and selflessness. Ourselves at the NFF have followed not only the meteoric rise of the company but its patriotic fervor and sense of nationalism. It is an organization that believes firmly in the Nigeria project, just as we do.

“This contract covers all the National Teams, from the Super Eagles to the junior teams. Let me say it here that the Super Eagles will be flying to Cape Verde on Monday for their FIFA World Cup qualifier in the latest brand of aircraft just acquired by Air Peace.

The NFF is happy to partner with this highly responsive organization that has Nigeria at the heart of everything it does.”

He also assured that NFF will keep to the letter and spirit of the contract.

Onyema, who spoke at length on the power of football and the glory locked in Nigeria’s humongous human and material resources, said his company was delighted to have the opportunity to work with the NFF and the National Teams.

“We decided to partner with the NFF not just because we are enamored by the hard work and resilience of Mr. Amaju Melvin Pinnick in improving a lot of Nigeria’s football on the pitch and in the boardroom, but also because we passionately seek a platform to give Nigerians hope.

“Football is a huge unifying force everywhere and the same is true of our country.”

Onyema said Air Peace has the capacity to compete with the best airlines in the world and would offer top-of-the-range services to the various National Teams.

The contract is for one year, renewable for four years, and worth N200million with separate Value-In-Kind in the worth of N100million.

Fayose to Oshiomhole: You are a fake comrade, liar, power-hungry politician