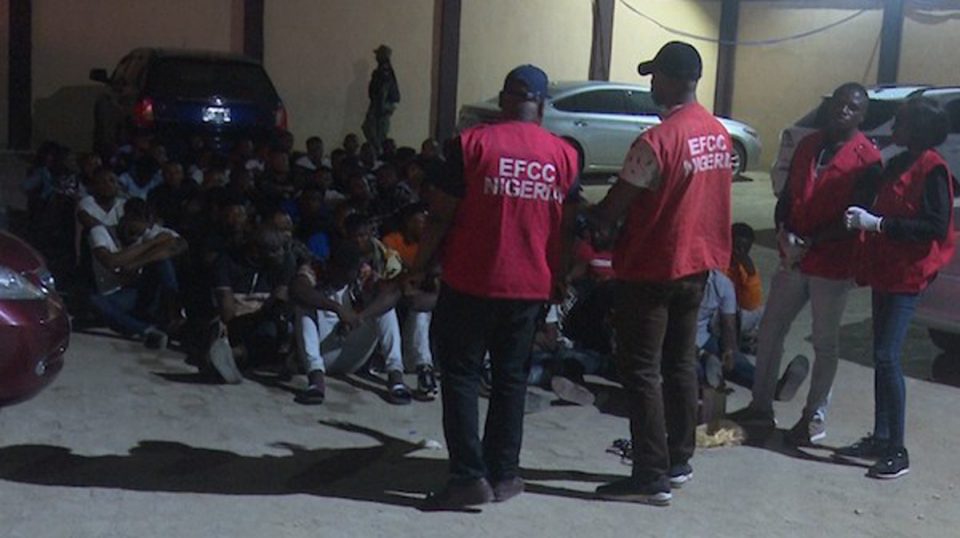 Operatives of the Economic and Financial Crimes Commissions have arrested 56 suspected fraudsters in a sting operation at the Ogun State Government’s hotel, the Mitros Residences Annex, and two other hotels in Abeokuta.

The EFCC operatives reportedly broke into the Mitros Residences Annex, Ceilia Suites and one other to arrest the suspects.

The EFCC operatives were said to have broken into the hotels around 4am on Monday and arrested some lodgers suspected to be Internet fraudsters.

During a visit to the government-owned hotel on Monday, our correspondent observed the few remaining lodgers, especially ladies, and some workers hanging around to discuss the sting operation.

Apart from broken hotel doors, some broken plates were also sighted on the hotel premises.

A worker said some of the suspected fraudsters escaped arrest, while others were whisked away by the operatives.

A lady, who claimed to be in one of the rooms during the sting operation, said the armed EFCC operatives took away about six phones from the room, where she was with her partner.

The lady, however, said her partner escaped arrest, but his cars and gadgets were seized by the EFCC operatives.

She said, “We did not hear anything; it was when they switch off the generator that we discovered that there was a problem, especially when we heard the cry of someone.

“Like six phones were taken from our room. Those people are thieves; they stormed different rooms in the middle of the night.

“The person I was with escaped, but his vehicle was taken away.”

Odeniyi said, “Yes, it is true; the EFFC made the arrest of some fraudsters in Abeokuta, the Ogun State capital.

“Items such as laptops, mobile phones and cars were confiscated from the suspects.”

When asked about the offences for which the suspects were apprehended, Odeniyi said investigations were ongoing to confirm that.

Meanwhile, the EFCC has said its operatives from the Port Harcourt Zonal Command have arrested 27 persons in connection with suspicious oil bunkering.

This was disclosed by the Head of Media and Publicity of the anti-graft agency, Wilson Uwujaren, in a statement on Monday.

Uwajaren said the suspects were arrested during a random raid following a tip-off on Friday, September 10, 2012 in the Ahoada Local Government Area of Rivers State

Elections: I will join Nigerians to ensure process is peaceful, successful — Sirleaf

Retract your libelous statement against me or risk court action, Osoba tells Okurounmu

Minna jail break: I have not condemned any criminal, says Bello