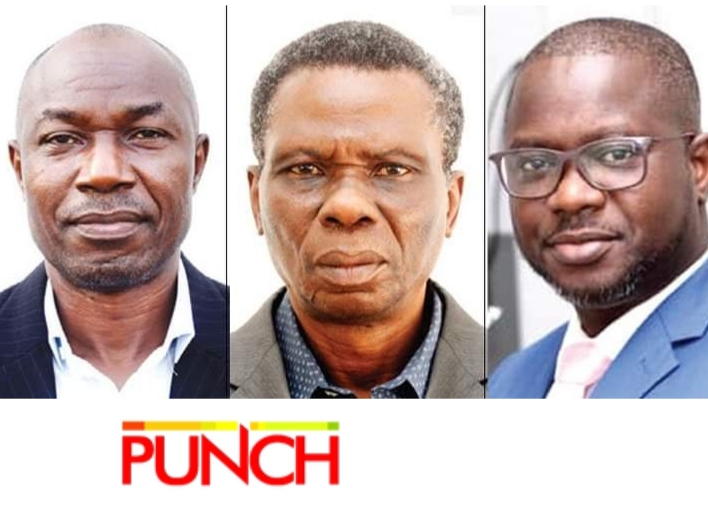 The management of PUNCH Nigeria Limited has announced changes in its newly established Content Division with the appointment of a new head for the division as well as new editors.

The company, a report by PUNCH newspaper showed, also named a new chairman for its Editorial Board and deputies for the print newspaper titles. All the appointments take effect from Monday, April 4, 2022.

Ademola Oni, the Editor of The PUNCH, was promoted Head of the newspaper’s Content Division, while Adedayo Oketola, the Editor, Weekend Titles (Saturday PUNCH and Sunday PUNCH), was appointed Editor, The PUNCH.

Oni, whose three-year tenure as Editor, The PUNCH, would have ended in July, will oversee the operations of PUNCH’s print and online platforms in his current role.

Oketola, also a former Business Editor of The PUNCH, is by this promotion expected to leverage his leadership and media skills to sustain and enhance PUNCH’s leadership of the nation’s newspaper market.

Abiodun Sonowo, a senior member of the newspaper’s Editorial Board and one of its finest analysts, was announced as the Chairman of the Editorial Board.

Meet The New Appointees At PUNCH

The PUNCH has also published information about the career and academic achievements of the bew appointees.

Oni, who holds a Master’s degree in Communication Arts from the University of Ibadan, joined the company in 2003, and was later deployed in Ogun State as the state correspondent in 2007.

A former Editor of Sunday PUNCH, he also served as the editor of the newspaper’s flagship online platform, Punchng.com. From the left: Odebode, Fabiyi. and Dada

Under his leadership, The PUNCH won several awards, including the Newspaper and Editor of The Year awards, while the newspaper also consolidated its leadership position in the news publishing market in Nigeria.

Oketola, a former News Editor of The PUNCH and News and Politics Editor of Saturday PUNCH, had a successful stint as Weekend Titles editor, with his team winning prestigious industry awards.

He joined the newspaper in 2008 as a correspondent on the Business Desk and had a distinguished career as a reporter. He won the Telecoms Reporter of the Year Award at the Nigeria Media Merit Awards (2012), the Conoil Prize for Energy Correspondent of the Year at the NMMA (2014) and Mobil Producing Award for Energy Reporting at the Diamond Awards for Media Excellence (2014).

He also won back-to-back the Energy Reporter of the Year at the continental Zimeo Award for Excellence in Media in 2015 in South Africa and 2016 in Kenya. He was the first runner-up in the infrastructure reporting category at the 2016 CNN MultiChoice African Journalist of the Year Award.

Oketola obtained an LL.B from the National Open University of Nigeria, Lagos, in 2017; an MA in English (Literature) from the University of Ibadan in 2006, and a BA in English (Literature) from the Obafemi Awolowo University, Ile-Ife in 2004. He also attended the New England Centre for Investigative Reporting, Massachusetts, United States in 2012, where he obtained a certificate in investigative reporting. He is a member of the Nigerian Guild of Editors and the International Association of Professional Writers & Editors.

Fabiyi, a former Abuja Bureau Chief of the newspaper, joined the organisation as a Senior Correspondent in March 2005, after working with TELL magazine as a reporter for three years. One of the nation’s leading politics journalists in his reporting days, Fabiyi is well-regarded for his resourcefulness and his knack for sourcing exclusive stories. He is a recipient of the Nigerian Media Merit Awards’ Features Writer of the Year prize and the winner of the Diamond Award for Media Excellence’s Editorial Integrity Award.

Sonowo has been a member of the award-winning PUNCH Editorial Board team since October 2009. His professional experience includes stints in broadcast journalism and the print media.

He worked at different times with Afriscope Magazine, Lagos Television, Radio Nigeria and National Concord. He joined the Champion Newspaper group in 1989, rising from reporter to Deputy Editor of Sunday Champion.

Sonowo joined The PUNCH in 2005 and served at different times as a columnist, news editor and production editor before he was deployed to the Editorial Board. He was promoted Senior Member, Editorial Board, in 2013.

He attended Igbobi College, Lagos, the Nigerian Institute of Journalism, Lagos, and the University of Lagos, where he bagged a Bachelor’s degree in History (Second Class Upper).

Prior to his appointment as Deputy Editor, The PUNCH, Odebode was the Head of PUNCH’s Abuja Bureau, where he served for six years. Odebode, a graduate of the University of Lagos, where he earned his Bachelor’s and Master’s degrees in English Language, also served as the newspaper’s Politics Editor.

Dada attended the Ogun State Polytechnic, Abeokuta, between 1992 and 1996 for his Higher National Diploma in Mass Communication, graduating as the Overall Best Student. In 2005, he obtained a Master’s in Business Administration from the Federal University of Technology, Akure.

He started his journalism career as a member of the National Youth Service Corps scheme between 1997 and 1998 at the defunct Concord Press Limited and was there until July 1999 when he joined Hallmark National Newspaper and, later, the National Interest Newspaper in 2001.

Dada joined PUNCH Nigeria Limited as a real estate correspondent in 2002 and rose through the ranks over the years to become the Business Editor and Metro Editor. He has participated in many local and international events such as the IMF/World Bank annual meetings in Washington DC, USA; Nigerian-Turkish Business Forum in Istanbul, Turkey; and the 19th National Congress of the Chinese Communist Party, among others. He is the recipient of several awards of excellence.

Why has it been difficult for southerners to unite?

Reps to investigate non release of retention funds by MDAs