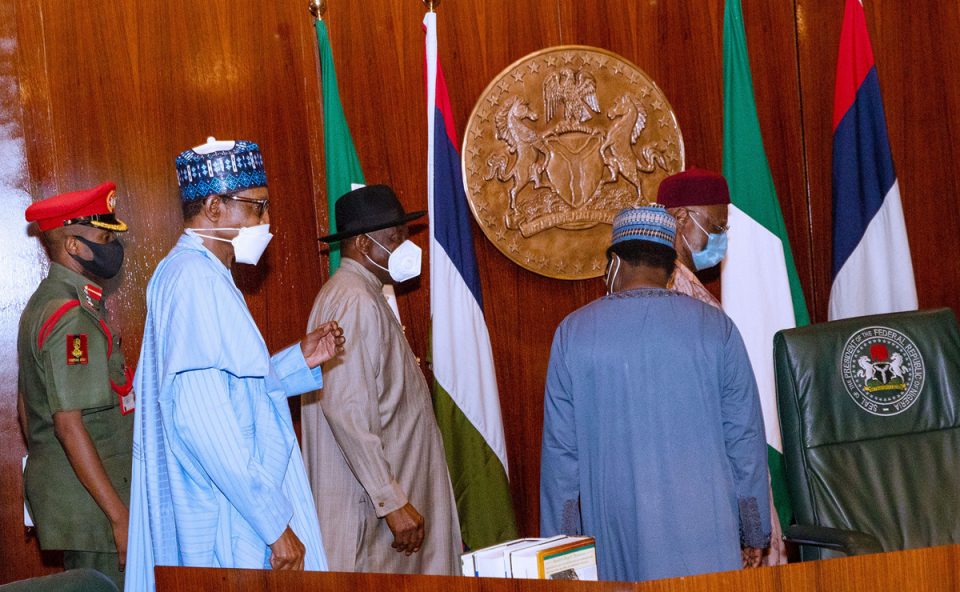 The President, Major General Muhammadu Buhari (retd.), is presiding over a meeting of the Council of State at the Presidential Villa, Abuja.

This is the fourth time the President will preside over the meeting. The first was held on October 21, 2015, the second on September 7, 2016, with the third held virtually in August 2020.

The meeting, which is being started at 10 am, is being attended physically and virtually.

Also in attendance are Vice President Yemi Osinbajo; the Secretary to the Government of the Federation Boss Mustapha, Boss Mustapha; National Security Adviser, Babagana Monguno and the Chief of Staff to the President, Prof. Ibrahim Gambari.

State governors in attendance are Hope Uzodinma of Imo State; Kayode Fayemi of Ekiti State, Atiku Bagudu of Kebbi State, and Bello Matawalle of Zamfara State, Nasir El-Rufai of Kaduna state among others. Other governors are attending virtually.

The council observed a minute silence in honour of the former head of Interim Government, Ernest Shonekan, who died on January 11, 2022.

A presidential aide who shared pictures of the meeting, Buhari Sallau, oosted, President Muhammadu Buhari presides over the Council Of States Meeting where a minute silence was held in honour of Chief Ernest Shonekan in the Council Chambers at the Statehouse, Abuja. 14th April, 2022. President Buhari (was) with Former President Goodluck Jonathan, Former Head of State Gen. Yakubu Gowon and Former Head of State Gen. Abdulsalam Abubakar shortly before presiding over Council of State Meeting in State House on 14th April 2022.”

COVID-19: ‘Why Fed Govt must invoke ‘Quarantine Act’, by Falana

Benue revenue board seals 3 banks, other outfits over unpaid taxes