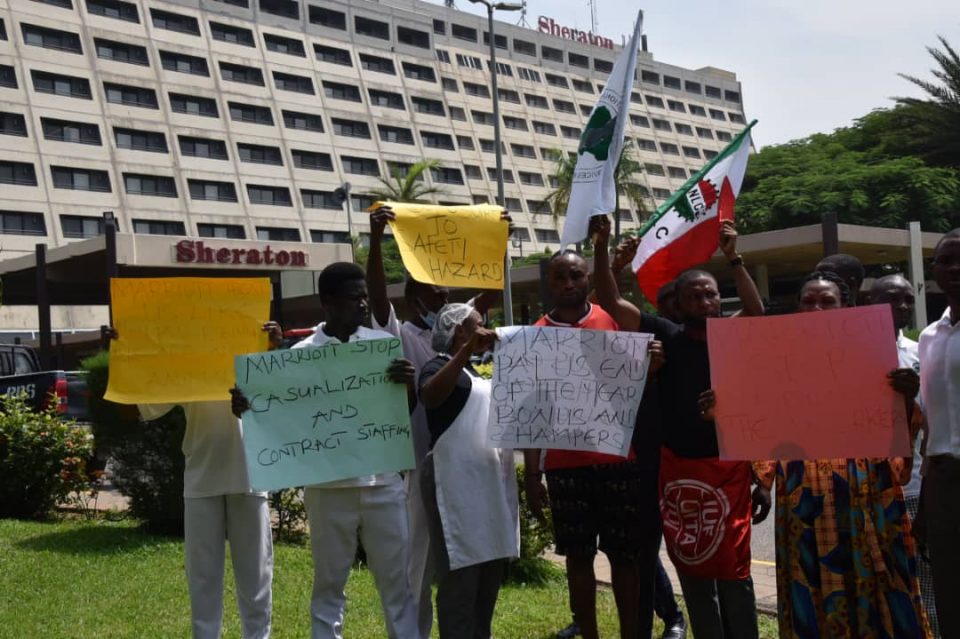 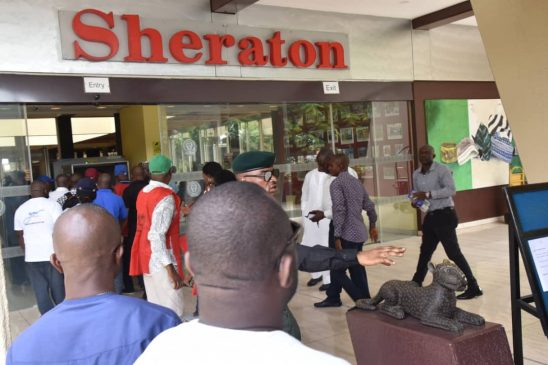 The General Secretary National Union of Hotel & Personal Service  Workers ( NUHPSW),  Leke Success and the management of Marriott International, the managers of Sheraton Abuja Hotel  on Tuesday resolved the lingering crisis of pending payments of workers Severance package before the massive rehabilitation of the hotel

After hours of intensive deliberations between the management and the Union leaders, Comrade Leke Success, the General Secretary of  National Union of Hotel & Personal Service  Workers ( NUHPSW), while addressing the workers shortly after the discussion told the workers that agreement had been reached that with the management on payments of workers. 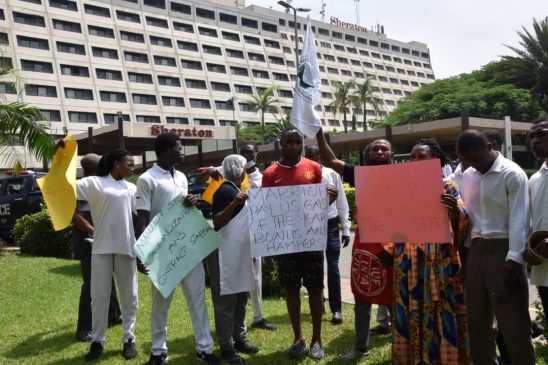 He said that the severance would be made to all staff either casual or permanent staff, adding that payment will continue tommorrow for all cleared employees whether casual or not.

He called comended Capital Hotel Plc ,owners of the hotel, magnanimity to add Christmas bonus even though it was not part of presentations done by Marriott on staff severance package

It will be recalled that the workers of Sheraton Hotel Abuja for some days now are protesting over none payment of their severance package by the hotel managers ,- Marriot International.

The protesters who were carrying placards with different demands written on it, which are read thus;

“Marriott Pay Us What Is Due To Us”

“Enough Of Exposure To Safety Hazards”

“Marriott Treat Us Like Human Beings; We Are Not Animals”
“Monkey dey work… Baboon dey chop”

“This is not how Marriott operates in Europe & America”

“Our workplace with Marriott has become a danger zone

When the crowd was going out of hands the Nigerian Police were called in by management to ensure the act does not snowball into big breach of peace, before the union and the hotel managers – Marriot later went into a meeting to see how the severance payment and other labour issues involved will be addressed

However, the management in a statement to guests says “Dear Valued Guest, We wish to.kindly inform that the hotel is closed temporarily from.today , Tuesday October 18 ,2022

We sincerely apologize for all the inconvenience . Thank you for your understanding and cooperation  ”

According to them, specific date of reopening the hotel as an aftermath of the expected massive rehabilitation which required huge capital investment .

“Issue of safety is very germaine ,hence one of the core reasons for the shut down

It is clear from.the workers protest that the hotel managers – Marriot International has mismanaged the infrastructure therein.

This development is coming in the wake of the acquisition of majority stake in Capital Hotel plc, owners of the hotel, by 22 Hospitality Limited. It will be recalled that the company had earlier issued a statement through its spokesman, Alhaji Lawal Taofeek, who quoted the Group Executive Director of the company, Alhaji Aminu Abdulkadir, as saying that the new investors are desirous of restoring the hotel to its former glory of being the first-choice luxury hotel in Abuja.

According to Aminu, this strategic drive is also aimed at making the hotel carve out a niche for itself by becoming a leading hospitality firm offering premium services to customers in accordance with global standards.

“The hotel is currently managed by Starwood/Marriott under various system license agreements with CHP. In the past, Starwood had acknowledged in various reports that the hotel was in a much degraded state and would require hard renovations to make it brand compliant.

However, despite the hotel’s poor condition and non-compliance with its brand standards, Marriot/Starwood has continued to manage the Sheraton Abuja Hotel, which is currently in a dilapidated and rocking the  sales of the hotel to new which manages top hotels around the world including the Sheraton hotels in Nigeria has clarified its position following the announcement that the new owners of Abuja Sheraton Hotel

Niger gets $900,000 grant from South Korea for urban policy