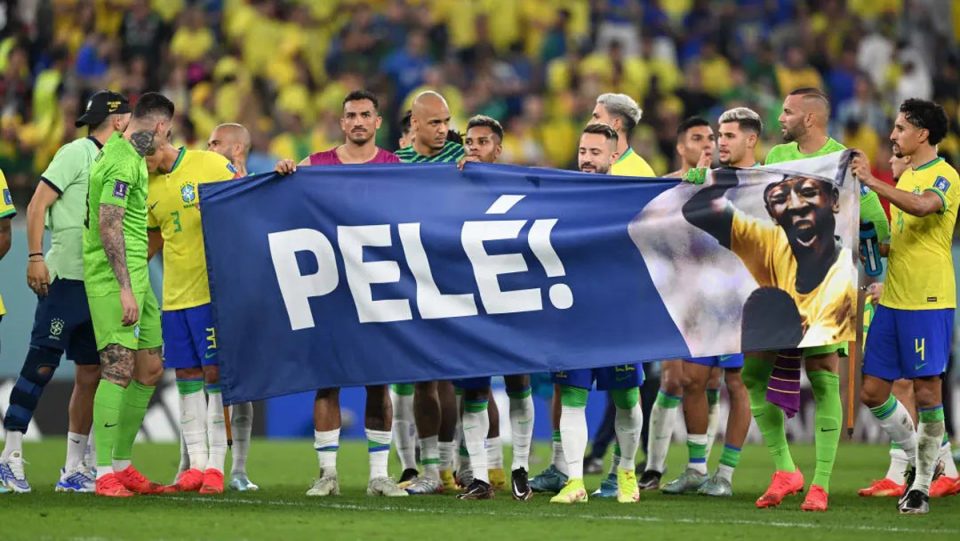 Brazilian team at the ongoing World cup in Qatar gave emotive tribute to the soccer legend Pele after their 4-1 victory over South Korea which saw them move to the quarter-finals.

Pele was admitted to hospital on Saturday currently battles with cancer. He had a tumour removed from his colon in September 2021, and this week he was diagnosed with a respiratory infection.

On Monday afternoon Pele tweeted: “I want to inspire you, my friends. I’ll watch the game from here at the hospital.”

On how the touching post-match tribute by the players happened, Neymar escaped down the tunnel at the full-time whistle to collect a banner eulogising one of the game’s greatest ever players. It was confirmed on Saturday that the 82-year-old had been admitted to hospital over concerns for his health, although Pele’s daughters denied that he is “ready to say goodbye” just yet.

The tribute from Brazil’s players matched those from fans around the ground, as Pele himself tweeted that he would be watching from his hospital bed. Brazil’s all-time top scorer saw Neymar go one step closer to his record of 77 goals as well as a sublime Richarlison strike for their third of the match, in what was a near-complete performance from the Canarinha that blew away a debilitated South Korea side.

After a hallmark display from the tournament favourites, Brazil set up a quarter-final clash with 2018 finalists Croatia on Friday.

IBEDC to invest N91bn to improve network, others in 5 years