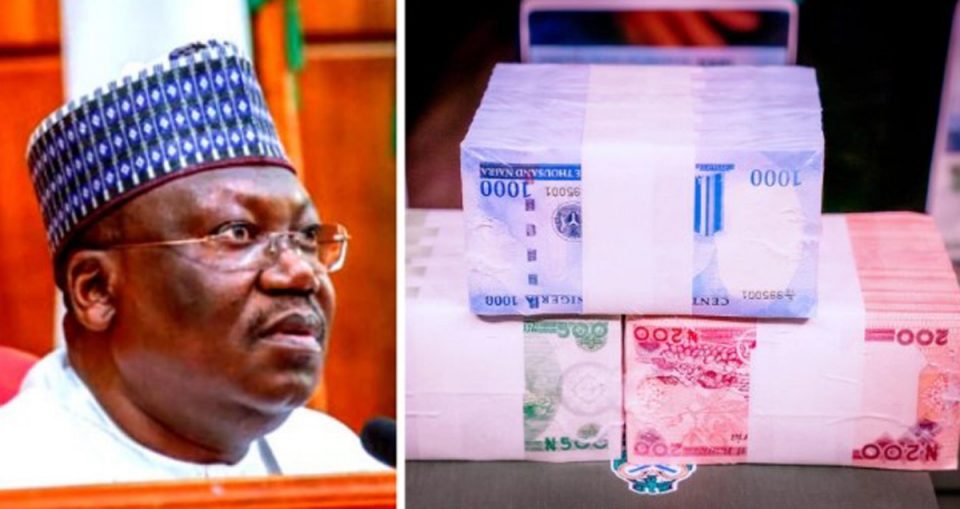 The Senate will on Friday meet with two deputy governors of the Central Bank of Nigeria to explain the apex bank’s recent cash withdrawal limit policy announced on Tuesday.

The red chamber planned to seek clarifications on the new directive which restricts over-the-counter cash withdrawal by individuals and organisations to N100,000 and N500,000, respectively, per week.

According to a memo signed Tuesday by the CBN’s Director of Banking Supervision, Haruna Mustafa, withdrawals above the thresholds would attract processing fees of five per cent and 10 per cent, respectively, for individuals and corporate entities going forward.

In addition, third-party cheques above N50,000 shall not be eligible for OTC payment while extant limits of N10m on clearing cheques still remain.

The circular also directed banks to load only N200 and lower denominations into their ATMs and restricted withdrawal to N20, 000 per day from ATMs.

The policy which will become effective on January 9, 2023, had generated criticisms but the CBN clarified on Wednesday that PoS operators could apply for waivers.

However, the Senate President, Ahmad Lawan, directed the Senate Committee on Banking to grill the two re-appointed deputy governors of the CBN, Aisha Ahmad, and Edward Adamu, who will be screened on Friday, on the new cash withdrawal policy.

The resolution on the new CBN policy followed a move by Senator Philip Aduda (PDP FCT) to move a motion on the development.

Aduda had sought to rally other senators to deliberate on the policy but the Senate President, Lawan, interrupted him, saying it was too early to debate the circular.

Also, Senator Gabriel Suswam (PDP Benue North-East) supporting his colleague and pushed that the motion should be allowed to fly considering the innocent Nigerians that would be affected by the CBN policy.

Addressing Lawan, he said, “I think you should have allowed us to discuss this motion for the sake of Nigerians.”

But Lawan, who appeared not to favour the move, stopped Aduda and Suswam, saying, “No, distinguished (Senators), there is a misunderstanding here. I told you what my personal opinion is. My personal opinion is that this weekend is off. Maybe but we have an opportunity; the Committee on Banking will be screening two deputy governors of the CBN. This is one major issue they should raise with them.

“As good as the cashless policy may be, it shouldn’t be jumped at, at once.  The way the CBN is going about the policy, many Nigerians would be cut off and that won’t be accepted. Motion on the policy will be thoroughly debated in the Senate on Tuesday next week after adequate information has been gotten on it.”

Lawan noted that the newly re-appointed deputy CBN governors would be screened between Thursday and Monday so that by Tuesday, they would have been equipped with enough information to raise a motion in support or shoot down the policy.

He said: “Before Tuesday next week, our committee on Banking, Insurance and other Financial Institutions mandated to screen the reappointed deputy governors of the Central Bank should focus its questions on the planned policy.

“The CBN deputy governors must be thoroughly grilled on the policy after which extensive debate on it will be made by Senators on Tuesday next week.”

However, the lawmaker representing Kaduna Central and Chairman, Senate Committee on Banking, Insurance and other Financial Instructions, Senator Uba Sani confirmed to The PUNCH that the CBN deputy governors would be screened on Friday.

He said: “We are working on their letters, the letters will be served tomorrow (Today) and the deputy governors of the CBN will be screened on Friday.’’

The President, Major General, Muhammadu Buhari (retd.), had on Tuesday sent for screening and approval the names of the two CBN deputy governors.

The Director of Corporate Communications of the Central Bank, Mr Osita Nwanisobi, has said that Point-of-Sale operators can take advantage of an exemption to request more cash beyond the new limit.

Speaking with one of our correspondents on the phone, he noted that there is an exemption stipulated in the newly released circular, which PoS operators can take advantage of, based on the requirements and in line with the amount of transactions they process.

He said: “The circular is very clear. If you are doing PoS, it is online and mobile transaction. Whenever cash is involved, then there is a limit. However, there is an exemption in the circular, which PoS operators can apply for based on the volume of their transactions.”

Following the new directive, the National President, Association of Mobile Money and Bank Agents of Nigeria, Victor Olojo, had said that PoS operators would protest against the policy which he said was targeted at killing their livelihood.

Olojo argued that the cash limit would harm their business as it translated to shutting down PoS terminals.

However, there was an exemption that allows up to N5million for individuals and N10m for corporate organisations once a month but with certain requirements.

To enjoy the exemption, banks were required to obtain some information from the drawee and upload the same on the CBN portal created for the purpose.

The requirements include a valid means of identification such as the National Identity Card, international passport, driving licence; Bank Verification Number of the payee; notarised customer declaration of the purpose of the cash withdrawal; senior management approval for the withdrawal by the managing director of the drawee where applicable and approval in writing by the MD/CEO of the bank authorising the withdrawal.

According to the guidelines, monthly returns on cash withdrawal transactions above the specified limits will be rendered to the banking supervision department.

Also, compliance with extant anti-money laundering and countering the financing of terrorism regulations relating to Know Your Customer, ongoing customer due diligence and suspicious transaction reporting are required in all circumstances.

On the likely effect of the policy on the people in the rural areas, who regularly deal with cash, Nwanisobi said, “The policy only states that you cannot go beyond a particular limit. It doesn’t stop anybody from using cash. So, those in the rural area can still transact with the available cash.”

Meanwhile, the South-South Agenda for Tinubu/Shettima Support Groups has condemned the CBN policy in strong terms, describing it as a plot to pitch the poor masses against the President.

In a statement on Wednesday signed by the National Coordinator of the group, Mr. Bitrus Oliver, it argued that Nigeria is one of the top three unbanked countries in the world with more than 60m of its adult population still unbanked.

The group stated, “This policy will clearly undermine the efforts of the Federal Government in sustaining micro and small scale enterprises across the country as it will limit the fund in circulation due to the non-availability of cash and may totally asphyxiate small and struggling businesses before the policy is stabilized.

“When people find it difficult to withdraw enough money they need from the bank and are repeatedly unable to complete transactions due to lack of funds, there may be public outrage and a massive backlash on the president for allowing the policy.

“The new withdrawal policy will be able to put money politics in check within the (election) period, it also has the capacity to wreck many local economies across the country due to the paucity of cash it will create.”

Ayu to Tambuwal: ‘you’re the hero of the convention’