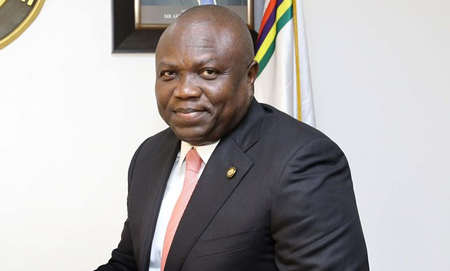 The Committee for the Defence of Human Rights (CDHR) on Monday described the outgoing governor of Lagos State, Mr Akinwunmi Ambode, as “an achiever and administrator per excellence Lagosians will miss”.

Mr Alex Omotehinse, the Chairman of the Lagos State Branch of CDHR, said that Ambode’s achievements were numerous for any resident to gloss over or forget soon.

TBI Africa.com said the News Agency of Nigeria (NAN) reports that Ambode lost his second term ticket in the ruling All Progressives Congress (APC) to Mr Babajide Sanwo-Olu, who is now the Governor-elect of the state.

“The Lagos State branch appreciate the outgoing Governor, His Excellency Mr Akinwunmi Ambode, for the good works he has been doing in the state for the past three and half years.

“Without any fear or favour and with utmost sincerity, Mr Akinwunmi Ambode has demonstrated his genuine sincerity of purpose and pro-people’s policy in governance which has distinguished him as an achiever in less than four years between 2015 and 2019.

“The working governor has touched almost every nook and crannies in the state in terms of developmental projects that are visible for any doubting Thomas to see.

“As a pro-democracy and human rights organisation, we were disappointed that a performing and a reference point governor within and outside his party did not have the opportunity to finish the good work he has started.

“We believe Lagosians have started missing him from the day he was denied a second term ticket by his party,” Omotehinse said in a statement.

“We can see a fortified security in Lagos with N6.6 billion equipment for security agencies, massive road rehabilitation and reconstruction of inner roads.

“Ambode’s assent to Lagos Neighbourhood Safety Corps Law to increase security in the communities across the state is highly memorable.

“We also see payment of backlog arrears for retirees, setting up of N25 billion Employment Trust Fund and employment of 1, 300 teachers to revive primary education.

“We can also notice upgrade of schools’ infrastructure, massive light up of Lagos highways and streets. All these and many others to mention but a few are what the governor has done in just 46 months in office,” he said.

According to him, within the last three and half years, Ambode has convinced Lagosians that a greater Lagos is achievable through tremendous social infrastructure and people’s engagement in governance.

The rights activist said, assuming Ambode had a second term, by the time many of the ongoing projects were completed, they would be world class masterpiece and befitting.

“We therefore, implore the Governor-elected, Sanwo-Olu to please ensure the completion of all the nearly-completed projects of Ambode,” he added.

Omotehinse advised Sanwo-Olu to ensure that all the yet-to-be concluded projects of Ambode be the utmost priority in his first point developmental agenda.

Lagos: Sanwo-Olu must fulfil his promises to Badagry division — Lawmaker

Over 2,000 workers killed in insurgency yet to get benefit – NLC