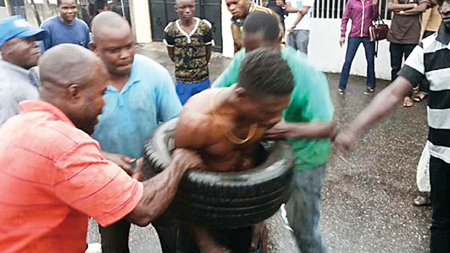 The Police Command in Nasarawa State on Wednesday confirmed the killing of two persons suspected to have snatched a motorcycle in Lafia, the state capital.

Mr Bola Longe, the Commissioner of Police, who confirmed the incident to newsmen in Lafia, said the command got information on Tuesday night that some motorcycle snatchers had been apprehended by some youths around Agyaragun-Tofa.

The suspects were said to have snatched the motorcycle along Shendam road in the outskirts of Lafia.

“Immediately we got the information, we rushed to the scene, but before our men could arrive there, one of the suspects had been lynched and burnt by the mob, while the second suspect died on the way to the hospital.”

Longe warned the people to desist from meting out jungle justice to suspected criminals, urging that such suspects should be reported to security agencies for appropriate action in accordance with the law.

“People should learn not to take the laws into their hands; they must let those saddled with such responsibilities to handle it because resorting to jungle justice is, in itself, an offence,” he said.

He urged the people to always offer information that would help in curbing crime and criminality in the state.

Meanwhile, an eyewitness, who chose not to be mentioned, told newsmen that luck ran out on the suspects after dispossessing the victim of his motorcycle when they (victims), raised an alarm that attracted passers-by, who swooped on them (suspects).

According to the eyewitness, one of the suspects was lynched at the spot, while the second was chased to Agyaragun-Tofa road where he was apprehended.

Another witness, a commercial motorcycle rider, recounted how people had lost their motorcycles in similar circumstances, and called for stringent measures to check the trend.

“We have suffered a lot from these thieves; our members lose their bikes on a daily basis with nothing done about it.

“This incident will send a strong signal to others in the business of snatching motorcycles to desist and allow us to earn a living through our legitimate efforts,” he added