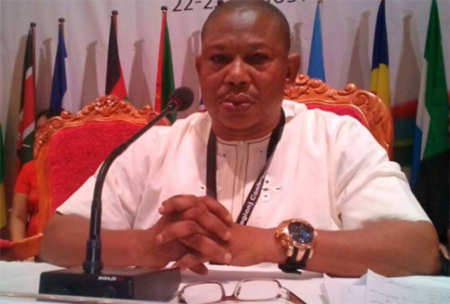 Members of the Imo House of Assembly on Wednesday served an impeachmemt notice on the Speaker of the house, Mr Iheanacho Ihim, for alleged misconduct.

Offor, who read the notice to newsmen, said that it was signed by 21 of the 27 members, adding that the allegations against the speaker would be investigated.

TBI Africa.com quoted NAN reports that Ihim had read a letter of apology from the suspended local government council chairmen during the plenary session and ruled that they be recalled without contributions from members.

He also refused to recognise members who raised “objections” and quickly adjourned sitiing.

Members, who felt aggrieved over the development, described the walkout as a slight on them.

They stayed back in the chambers, even after power supply was disconnected, throwing the place into darkness.

Offor alleged that Ihim had “consistently run the house without recourse to parliamentary procedures.”

He described Ihim’s action at the plenary session as “an insult to other lawmakers.”

Offor further alleged that the speaker took a unilateral decision to recall the suspended council chairmen, contrary to members’ resolution at the executive session.

He said that efforts made by members to make contributions, invoking Order 15 of the House Rules, were rebuffed by the speaker who, he said, “quickly adjourned without giving room for input from other members.”

He said that his removal followed a resolution signed by 14 members of Action Alliance (AA) in the house.

Several efforts made to get the reaction of the speaker on the notice were unsuccessful as phone  calls made to him failed to connect.

But Mr Marcel Ekwezuo, thel Chief Press Secretary to Ihim, in his reaction in an online platform, said that the speaker “has neither been impeached nor suspended.”

How nationwide lockdown will affect COVID-19