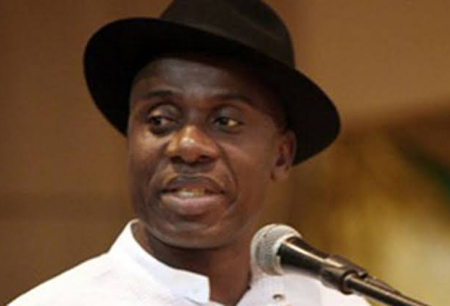 The Minister of Transportation, Rotimi Amaechi, on Sunday donated N10 million in a ‘Thanksgiving Service’ held to mark his 54th birthday and the end of his tenure as a minister.

Amaechi gave the donation while giving his testimony at the St. Gabriel Chaplaincy Catholic Secretariat of Nigeria in Abuja.

He said his wife organised a dinner to mark his birthday with his friends, but after receiving a lot of financial gifts from his friends, he decided to share his gifts with the church.

He recalled that he grew up from a very poor background and could barely feed, stating that the donation was for 10 bags of rice per month for the period of 3 years.

“Why I am doing this is because I know that there are some people in this church, who don’t have food to eat, the way I could barely feed while growing up then.

“So, for the next three years, I will give 10 bags of rice monthly.

“Also, from next Sunday, bulletin will be free for everybody for the next three years.

“I just want to thank God for my life, for my family, my friends, for everything God has made me to be; I cannot do anything without God.

“My priority is to make heaven. Everybody wants to make heaven, the only thing is that people still want to live their sinful lives and still go to heaven.

“Everyone must, however, avoid the sinful life if they want to make heaven,” he said.

Meanwhile, his wife, Judith, said she was grateful to God for keeping her husband alive.

She said that his honesty and integrity had always spoken in volumes for him, stating that she always encouraged him to continue to serve others.

According to her, the minister has done his best in terms of infrastructural development in the area of rail.

He said that they had been friends since 1999 and that he could not but be a passionate loyalist to his friends.

“We all thank God for his life.

“Every day is a day of celebration, but for someone who has now turned 54 years, he has every reason to thank God.

“By his testimony, he is one man that has never forgotten his days of little beginning. He continues to share this to appreciate God.

“He is very generous and a passionate loyalist, particularly to his friends; he will always go out of his way to assist,’’ he said.

TBI Africa said the News Agency of Nigeria (NAN) reports that Amaechi from Ubima town, Ikwerre Local Government Area of Rivers, was born on May 27, 1965.

50% of power generated in Nigeria is stolen by customers – BEDC