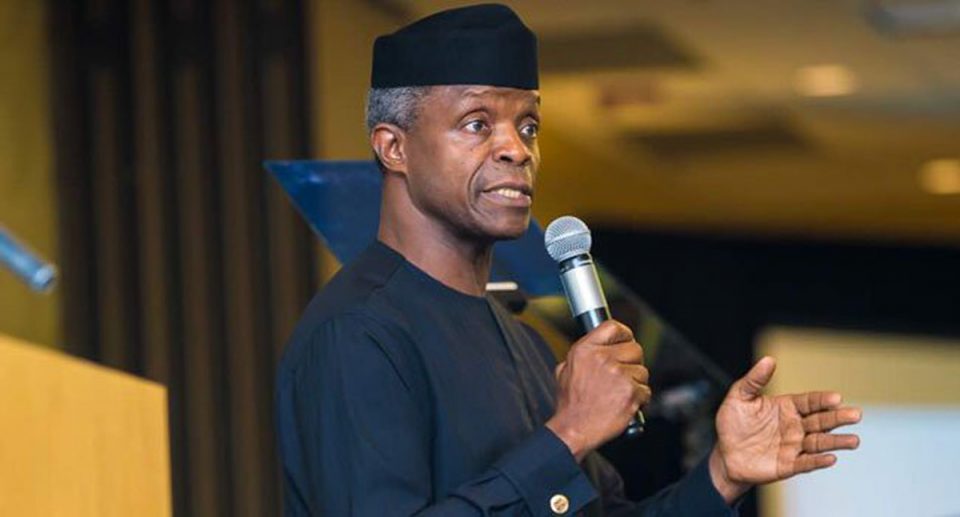 Vice President Yemi Osinbajo says that digital technology and its application will change the face of agriculture in Africa.

Osinbajo made this submission on Wednesday while featuring at the panel discussion session of the African Green Revolution (AFGR), being held at International Conference Centre, Accra, Ghana.

The theme of the forum holding between Sept. 3 and Sept. 6 is “Grow Digital: Leveraging Digital Transformation to Drive Sustainable Food Systems in Africa.”

Osinbajo said that there were many companies that were interested in agriculture as a lot of them had  already keyed  into the agriculture space.

According to him, one of the big advantages of technology is collaboration, which is the major future of digital technology.

“People can get online; find out what this company is doing; some companies are linking investors to farmers and it is so easy to find out what they are doing by simply going to their website.

“Some of the Fintech companies are also in that space helping to make payments; helping to do transactions and a lot of them are doing well just by building the space.

“And I don’t think we have a choice; what we are going to see is that digital technology will change the face of agriculture in Africa.’’

The vice president said digital technology was getting easier to manage especially with mobile payments and mobile platforms.

He said that in Nigeria, there was huge mobile internet participation as the country ranked high in terms of using mobile phones–for the very educated and the uneducated.

Osinbajo said the Nigerian government did a lot of cash transfer payments and payments to the most vulnerable using mobile phones.

“So, I think it is actually getting easier; one of the advantages of digital technology is that if you are a digital native as they call them, you are able to learn faster.

“We are looking at the application of digital technology not just in agriculture but in our society and economy as a whole,’’ he said.

He said that Nigeria was modernising farming through the application of digital agriculture.

On his part, Akufo-Addo said that Ghana had modernised significantly in agriculture in recent years.

He said that Ghana was developing the capacity to feed the world via agriculture.

“We are looking at how to take advantage of the markets of the world for our agriculture.

“How to penetrate the markets of the world,’’ he said.

Ngirente, however,  identified paucity of fertilizer, post harvest losses among others as challenges confronting agriculture.

He said that digitalisation was part of agriculture reforms in Rwanda.

“Today, everyone who wants to invest in agriculture has internet.

“We have invested heavily in managing climate and we are involving the youths in agriculture and making the sector profitable,’’ he said.

Sacko, on her part, commended the East African countries for  doing very well in digital agriculture and called on other countries to strive more in that regard.

The event attracted no fewer than 27 ministers of food and agriculture and 2,500 delegates.

The AGRF presents a premier platform for African and global leaders from both the public and private sectors to advance policies, programmes and investments as well as harnessing agriculture in ensuring food security, increasing income and promoting economic development.

IPPIS: If FG stops our salary, we will stop work–ASUU insists