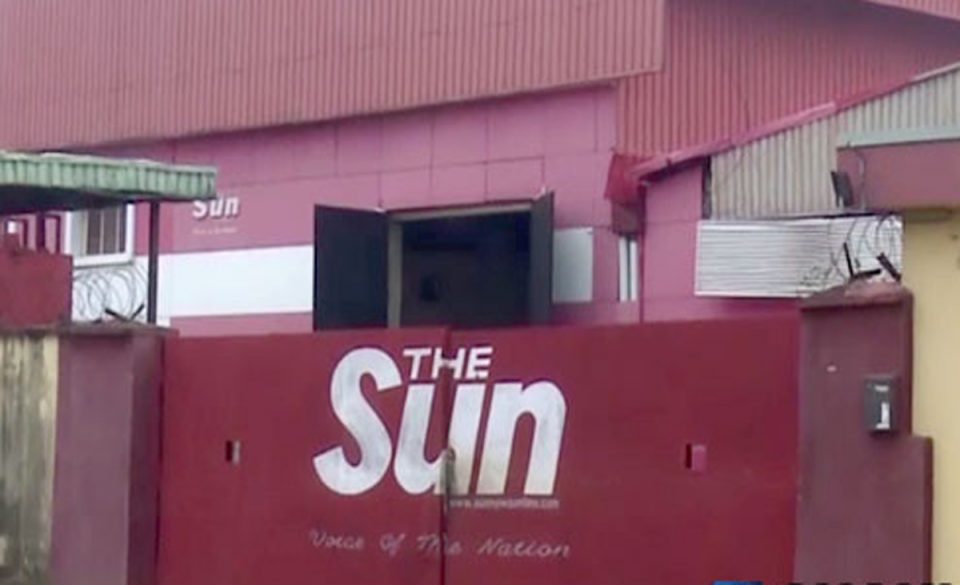 The  management of the Sun Publishing Limited on Saturday appealed to the Attorney-General of the Federation and the Minister of Justice to  stop  the Economic and Financial Crimes Commission ( EFCC)  from sealing the company’s corporate headquarters.

The appeal is contained in a statement issued by the management of the media outfit titled: ‘EFCC visit to  The Sun office with armed policemen: Our Stand’ and made available on  Saturday.

The management  of the Sun Publishing  Limited said that  the  Attorney General of the Federation and the Minister of Justice should  advise EFCC appropriately on the legal consequences of  such an action if implemented.

It  said that the appeal became necessary following the visit by  three officials of the Economic and Financial Crimes Commission (EFCC) with four heavily armed policemen  on Saturday, December 15, 2019 at about 10.00 a.m. to its corporate headquarters  in Lagos.

” They arrived the corporate headquarters of The Sun Publishing Limited at 2, Coscharis Street, Kirikiri Industrial Layout, Apapa, Lagos and put up a notice for  the staff and the general public to keep off the premises.

“The EFCC officials, who   came in a white Toyota bus with registration number,  ABUJA BWR-644GA, wrote on The Sun’s fence, “EFCC, keep off.”

“They also advised our staff to collect their personal belongings from the office as they will come back to seal the premises completely,” the statement stated.

The management of the media outfit stated in the statement that they did  not understand the legal basis for the EFCC’s action.

” It is on record that there is a pending appeal at the Supreme Court with Suit No: SC/546/2018 wherein The Sun Publishing Limited  appealed  against the Judgement delivered by the Court of Appeal on the interim forfeiture order made against it by a Federal High Court in 2007 based on ex parte proceeding.

“The Notice of Appeal and Motion for Stay of Execution were duly served on EFCC by the bailiffs of the Court.

“It is also pertinent to state that  EFCC vide a letter written by Counsel to The Sun Publishing Limited, dated  May 22, 2018 and duly received by one Caleb Peter on behalf of Rotimi Jacobs & Co. was further put on notice of the pending appeal at the Supreme Court.

” It was also  advised to stay action in the matter  pending the hearing of the Motion for Stay of execution and the appeal, ”  the statement said.

“So,  we do not see why the Judgment in that case should lead to attempt to seal The Sun Publishing Limited premises.”

The publishing company  said that it was  aware that both Sen. Orji Uzor Kalu and Slok Nig. Limited had since appealed the Judgment delivered by Justice Mohammed Idris and a hearing date given.

” We wish to reiterate that The Sun Publishing Limited is an ongoing corporate limited liability company and its shares are owned by various individuals distinct  from Sen. Orji Uzor Kalu.

“Therefore, the recent Judgment against Sen. Orji Uzor Kalu should not be used to disturb the operations of the company and the proprietary rights of  its innocent  shareholders until the matters are dispensed with at the  Supreme Court,” the statement stated.

Efforts by to get the reactions of the EFCC spokesman,  Wilson Uwujaren,   was not successful.

He did not pick calls made to his phone number as at the time of filling thus report.

Nigeria to collaborate with D8, others on economy, healthcare -Osinbajo