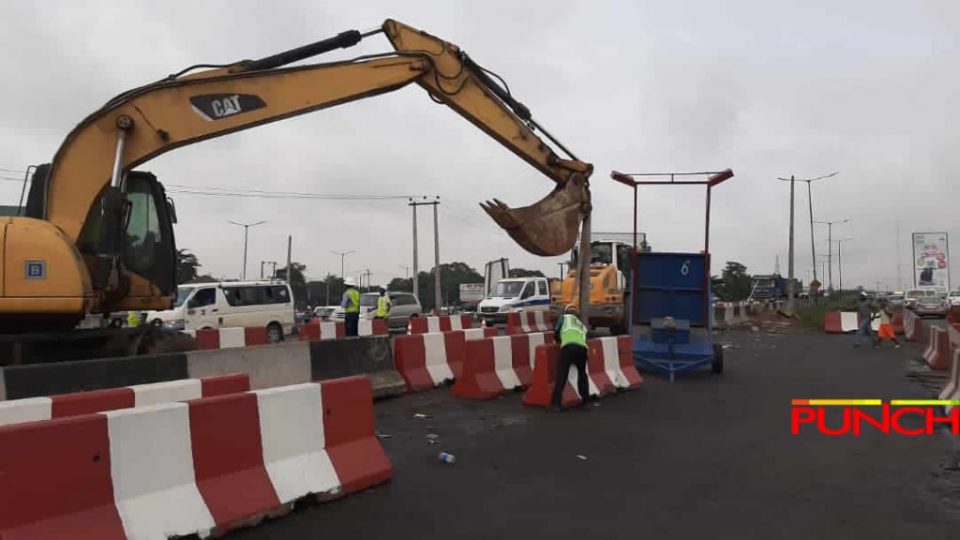 Construction resumed on Tuesday on the Lagos-Kara Bridge section of the Lagos-Ibadan Expressway.

Site preparation on the 600 metres Lagos outbound diversion which began on Thursday was concluded at about 11:50 a.m. on Tuesday.

Earlier, engineers and surveyors took measurements to pave way for relocation of crash barriers for accurate demarcation of the Lagos inbound carriageway, which now carries traffic in and out of Lagos from Isheri Junction.

The Federal Controller of Works in Lagos State, Mr Adedamola Kuti, said that the diversion was in compliance with an earlier promise to continue work on the Lagos outbound lane after the holidays.

He appealed to road users to obey traffic signs and cooperate with traffic management agencies to avert gridlock.

Kuti also appealed to motorists to ensure that their vehicles were in good condition to avoid breakdowns that could cause traffic congestion.

The Lagos Sector Commander of the Federal Roads Safety Corps (FRSC), Mr Hyginus Omeje, said that 100 personnel deployed at the site were being camped at the Ojodu office of the FRSC.

“We are going to operate a 24-hour shift in the sense that we will be here until we ensure that the traffic has gone down completely.’’

Omeje said there was an existing comprehensive traffic management architecture to prevent gridlock which would be put to use, adding that the FRSC had increased its fleet of towing trucks.

“As I speak now, we have three heavy duty towing trucks assigned to this corridor because we discovered during the first phase that prompt removal of any broken down vehicle was key to free flow of traffic.

“The strategy this time is pull off every broken down vehicle as soon as possible.’’

The sector commander said that the command had also assigned two power bikes to monitor and report breakdowns promptly for removal.

He, however, warned on driving against traffic and appealed for adherence to speed limits and other road rules to prevent crashes and impediments.

“Road safety is a shared responsibility. If these things will work very well, then the motoring public has a role to play. They have to obey traffic rules and regulations.

“Every construction zone, especially critical ones like this stipulated speed limits and lane discipline.

“I want to reassure Nigerians and Lagosians in particular that the corps in collaboration with other sister agencies will ensure that nobody sleeps on this road, instead of you sleeping here let me reiterate, we will sleep here,’’ he said.

The Commissioner for Works in Ogun State, Mr Ade Akinsanya, said the Ogun State governor was concerned about minimising the gridlock because most of the impact was on the state.

He said that Ogun had enough traffic personnel but that their request for additional vehicles and logistics would be taken to the state’s governor.

“We are not going to leave any stone unturned. We will deploy all available resources to augment what Federal Government is doing to bring succor on the road,’’ he said.

The diversion on the section began with the partial closure of the inbound Lagos portion on the Kara Bridge on Sept. 2, 2019, resulting to traffic diversion.

My interest is to ensure Nigeria has steady power supply – Sowore

Instagram adds video chat to its stable of social features

Arrest my son’s killers, mother cries out to Lagos CP