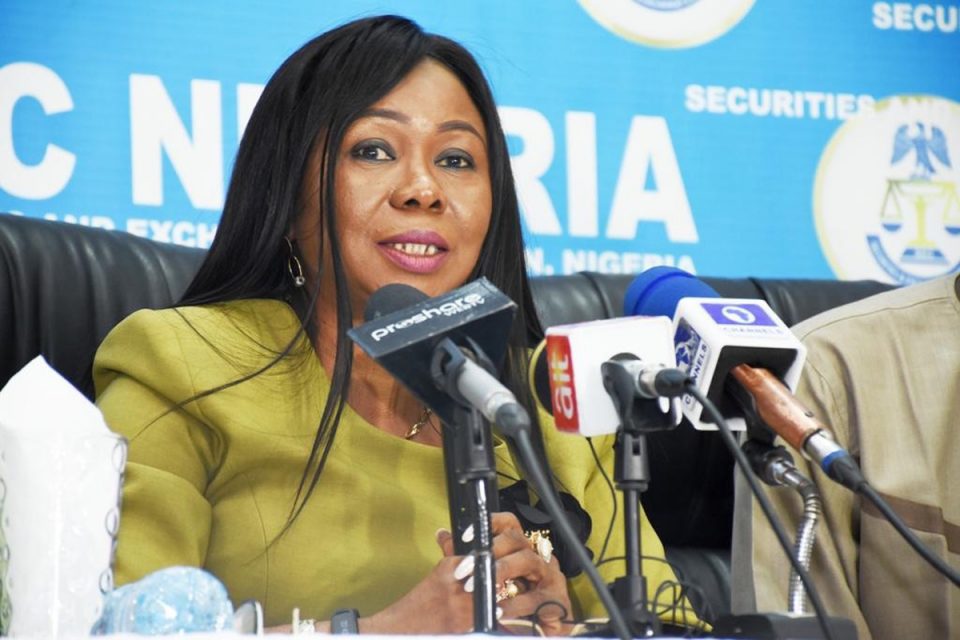 The Securities and Exchange Commission (SEC) says it generated N194.48 million from penalties in 2019.

Mary Uduk, SEC Acting Director-General, said this in the commission’s 2020 outlook and prioritised initiatives obtained in Lagos on Sunday.

Uduk stated that the commission’s enforcement efforts in 2019 yielded some positive results, noting that N194.48 million was generated through various penalties.

According to her, number of capital market fraud cases being prosecuted during the period is eight.

Uduk added that N100.11million was recovered for investors in the period as well as 8,848 units of shares of various companies.

Specifically, Uduk said that total amount in the blocked accounts stood at N1.12 billion in 2019.

She noted that value of real estate properties cautioned under investigation stood at N1.23 billion in 2019.

“The last 12 months has been a challenging and difficult period for our economy, the markets and by extension the SEC.

“The commission is poised to build on the gains of 2019 with a renewed focus on resource optimisation and execution of prioritised initiatives in 2020,” Uduk said.

She said the focus of the commission enforcement programme in 2020 as with previous years would be the protection of investors with particular attention to retail and unsophisticated investors in the Nigerian capital market.

“In 2019, the commission witnessed an upsurge in the activities of Ponzi schemes in Nigeria.

“The commission went after many of the promoters and directors of such schemes, securing a conviction last year and many others are presently being prosecuted.

“We will continue to combat Ponzi schemes this year.

“We intend to continue leveraging on the Memoranda of Understanding that were signed between the Commission and key stakeholders like the Nigeria Financial Intelligence Unit (NFIU) and the Economic and Financial Crimes Commission (EFCC) to strengthen our ability to do this.

“The commission will continue to adopt a zero-tolerance policy on unethical practices in the capital market with a view to promoting a culture of compliance and enhanced reporting.

“We will adopt a more proactive inspection and market surveillance regime to nip unethical practices and misconduct in the bud.

“We shall be referring more cases of infractions for hearing before the SEC Administrative Proceedings Committee.

“Furthermore, we shall be referring more matters for criminal prosecution to the office of the Attorney – General of the Federation in line with the provisions of Section 304 of the Investments and Securities Act 2007,” she said.

On 2020 outlook, Uduk said the commission would continue to implement Risk Based Supervision to ensure that its monitoring effort was more efficient.

She stated that SEC would upgrade identity management on investor accounts to include Bank Verification Numbers and verifications against the Nigerian Interbank Settlement Systems Limited (NIBSS) BVN validation portal.

SERAP, others sue Gbajabiamila, Reps over ‘plan to spend N5.04bn on 400 exotic cars’

We are ready to sell-off Jos DisCo – chairman

We appreciate your support to Nigeria’s economy, Buhari tells Afreximbank