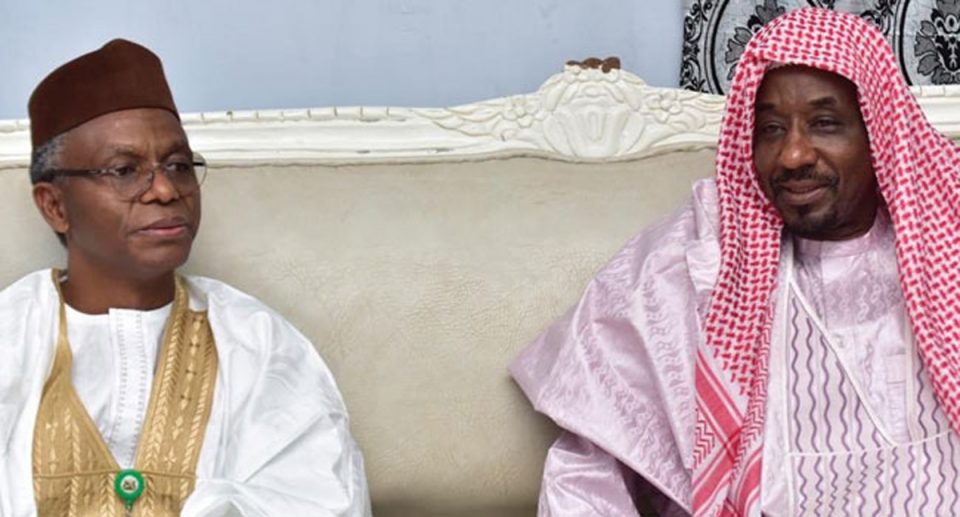 Former Emir of Kano  Muhammadu Sanusi II said Gov. Nasir El-Rufai of Kaduna state was  the first person to show up whenever he was  in need of friends and that the whole world knew it.

The former Emir, who stated this when he paid a courtesy visit to the governor at Sir Kashim Ibrahim House on Sunday, explained that he had decided  that  El-Rufai would be the first person he would visit upon stepping out of Lagos.

Sanusi II  said that he was in the Government House Kaduna to thank El-Rufai for his friendship, his service to the state and the country at large.

The former monarch also expressed appreciation on  his  appointment as Chancellor of the Kaduna State University (KASU), and Vice-Chairman of the Kaduna Investment Promotion Agency (KADIPA).

According to him, Kaduna has already overtaken other states as the leading destination for investments.

“Whatever we do, will be  simply supporting work that has already been done, and results that are already showing.”

The former Governor of the Central Bank of Nigeria (CBN), assured El-Rufai that he would continue to put in his best to support efforts to develop the state including making his contribution to the Kaduna State University.

“I am always ready to offer advice and counsel and to receive same. As you know, I will be going to Oxford in October for a year, following your footsteps, to publish a few books,’’ he said.

The former Emir also thanked  the people of Kaduna for the warm reception that they extended to him.

‘’I was overwhelmed by the reception that I received. I did not expect the crowd that I got.

“The people of Kaduna walked from the Air Force base to Government House and they are still there waiting to escort me to my residence.

“I am looking forward to fruitful seven days in Kaduna, meeting friends and relatives, and also meeting officials of Kaduna Investment Promotion Agency as it is more or less a working visit,’’ he added.

Sanusi also  prayed God to uphold the governor and bring peace to the state and the country.

Responding, El-Rufai said he was delighted to welcome Sanusi to Kaduna and that he was deeply touched that Kaduna was the first place he decided to visit since his relocation to Lagos.

El-Rufai noted that Kaduna was lucky to have a person of His Highness’s calibre on the board of its investment agency because of his wide global network, integrity and reputation.

BRICS calls for better representation of developing countries at UN