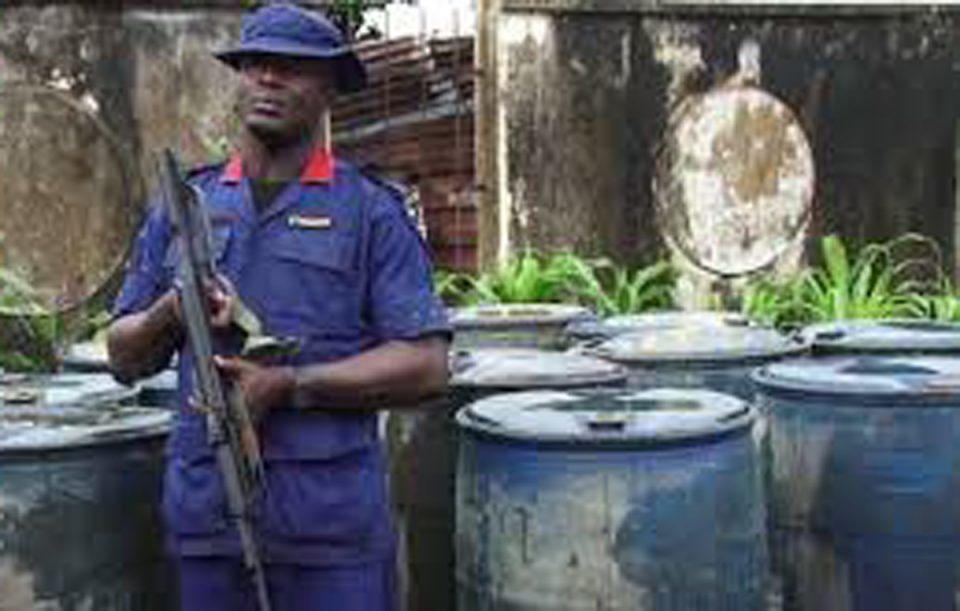 The Nigerian Security and Civil Defence Corps (NSCDC) has taken charge of 1,100 litres of Petroleum Mentholated Spirit ( PMS) meant to be taken away  from Nigeria to Benin Republic  through the  water ways by some oil thieves.

The Commandant of NSCDC, Lagos State, Mr Iskil Makinde, at the display of the exhibits in Lagos on Monday  said  that the thieves  were arrested in their boat while they were carting away the product to Benin Republic from Badagary where it was siphoned.

The Commandant said that  the incident  happened on Sept. 20 and that the products were stocked in polythene bags and kegs.

According to him at the parade,  all attempts to stop the culprits initially proved abortive.

“ However, a hot pursuit by the NSCDC marine corps of the thieves  made them abandoned the boat in which the products were loaded and jumped into the sea to escape,” he said.

Makinde  said that  other exhibits recovered at the scene include a wooden canoe which cracked in the course of bringing it to the shore.

“ Also recovered is a 740 HP Yamaha engine used to power the boat,” he said.

The  NSCDC boss described the incident as very unfortunate, especially, when the country needed all resources to enable it stabilise after  the  COVID-19 pandemic.

The  commandant  said  that the corps would not condone any act of criminality in the state.

“The corps is also assuring  the residents of Lagos State  of peaceful environment as its personnel are  set of ridding the state  of all criminal elements,” he said

Lufthansa Steps Up Cuts To Fleet, Staff As Outlook Dims