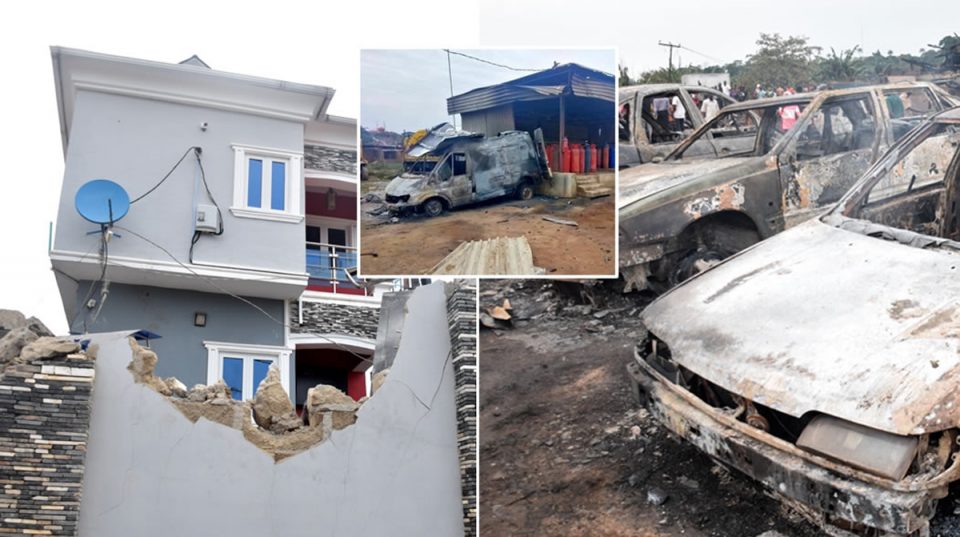 The death toll in the gas explosion at Baruwa, in the Alimosho Local Government Area of Lagos State, has risen to 10.

A community leader, Jide Osokoya, who confirmed the development to PUNCH Metro on Thursday, identified nine of the deceased.

Our correspondent had reported that pandemonium broke out on Cardoso Road, Baruwa, after a gas leak at the Bestroof Gas Station led to a wave of explosions last Thursday.

No fewer than 41 buildings, including shops, a church, a school and a hotel, were destroyed, while five residents died on the spot.

Eight victims who sustained injuries were rushed to the Trauma and Burns Centre at the Gbagada General Hospital. One of them died on the same day, which brought the casualties to six.

Osokoya told PUNCH Metro that a total of 10 people had so far been confirmed dead.

The woman and her kids were said to be visiting a relative when the explosion occurred.

Our correspondent gathered that the family members were caught in the inferno while escaping from the house.

While Mowa died on Thursday night, Olamilekan gave up on Friday; their mother passed away on Sunday.

Also reportedly killed in the explosion were Mr Broderick Unuajohwofia, 79, and his son, Otuene, 39, who were residents of 37, Cardoso Road, Baruwa.

A worker with the Independent National Electoral Commission, Olusola Adele, 39, was said to have also died along with his three-year-old son, Matia.

A Malian shoemaker, Mohammed Abubakar, and a landlady, Mrs Aishat Adebowale, 55, were also killed in the inferno.

Adebowale, who lived close to the gas station, was the first resident to wake up when the gas leak started around 4am.

After raising the alarm and alerting other residents, she reportedly returned to pick an item she forgot when she was burnt to death.

She was said to have died on her husband’s grave.

The 10th victim was said to be the security guard at the gas station, who had yet to be identified.

“Today (Thursday), we held an inter-denominational service for all of them. It involved both Islamic and Christian clerics.

“Community members visited the state House of Assembly to protest against the government. We were joined by our House of Assembly representative, Bisi Yusuf. We expressed disappointment at the state government for allowing the owner of the gas station to operate even after we rejected his business at the early stage. All we are asking for now is adequate compensation of all those affected,” Osokoya added.