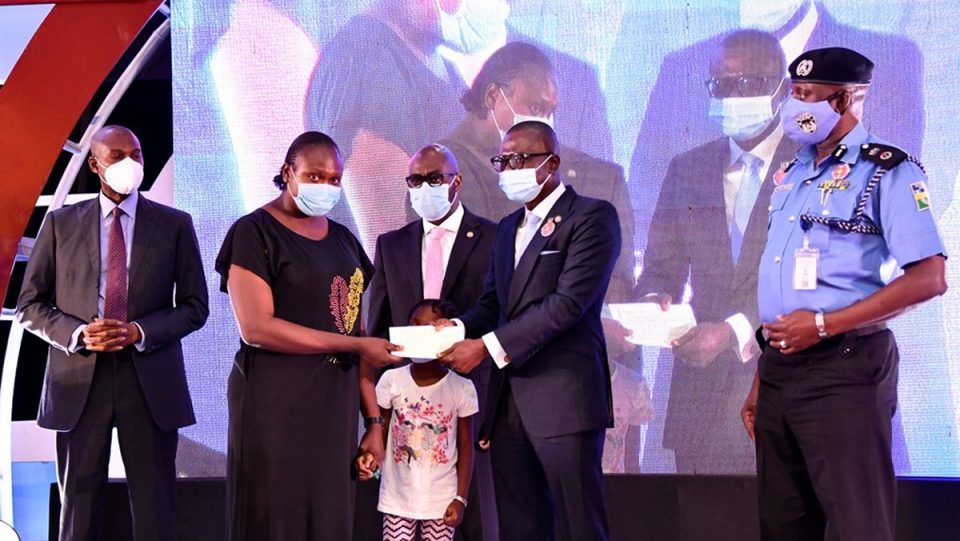 The Lagos State Government on Thursday presented cheques of N60 million to families of six police officers who lost their lives in active service during the EndSARS protest mayhem.

The Gov. Babajide Sanwo-Olu presented a cheque of N10 million each to the families of the slain police officers.

The cheques were giving to the beneficiaries during the 14th Annual Town Hall Meeting on Security with the Governor.

The theme of the meeting was: “Lagos Security: Resilience in the Face of Adversity´´, organised by the Lagos State Security Trust Fund (LSSTF).

Sanwo-Olu said that the state government would in addition give scholarship awards to the children of the fallen officers.

“As we rebuild our state, security remains our top priority. We will continue to expand and improve on our security architecture until we achieve a world-class system.

“We recognise that socio-economic growth is meaningless without an efficient security apparatus in place.

“As the Chief Security Officer of the state, my solemn promise to all law abiding citizens is that Lagos State will always be for them.

“We will stop at nothing to flush out all criminal elements whose sole aim is to foment chaos and perpetrate crime.

”Let me sound this note of warning, there is no hiding place for criminals and bandits in Lagos State,´´ he said.

Responding, the widows and children of the slain police officers commended the governor for the donation.

Mrs Olamide Erinfolami, the widow of ASP Ayodeji Erinfolami, thanked the governor and urged him to fulfilled his promise for continuity of the education of the deceased children.

“When I heard the information about my husband’s death, I didn’t feel good. I was so sad when I heard about the news.

”It was somebody from Maiduguri that called me to inform me; the police didn’t inform me officially about my husband’s death.

“I am from Ekiti State; I don’t live in Lagos. I want to say thank you to Governor Babajide Sanwo-Olu. I want him to also fulfill what he promised that he is going to do for our children,´´ she said.