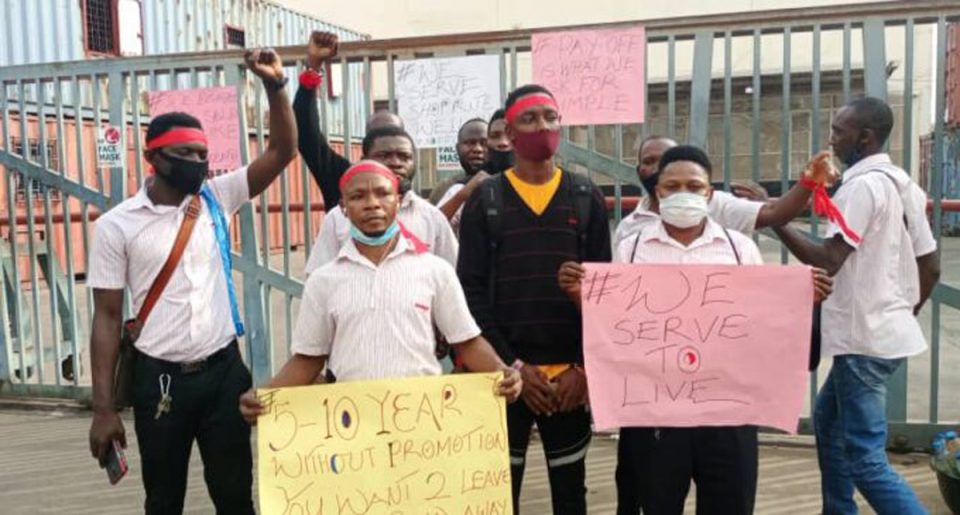 The National Union of Shop and Distributive Employees (NUSDE), Shoprite Ring Road Mall branch, Ibadan, has urged management of the firm to pay off its workers before the change of ownership on April 1.

The Chairman of the union, Mr Williams Peter, stated this in an interview with the News Agency of Nigeria (NAN) on Wednesday, in Ibadan.

He said that workers of Shoprite nationwide had, on Tuesday, embarked on a warning strike to press home their demands.

Peter, however, said that the warning strike was suspended to allow for a roundtable dialogue slated for March 4, with the management.

He said that workers ought to be informed by management on the agreement it had with the new investors, especially concerning them.

“Already, we are not okay with the Shoprite management concerning working conditions. The same is now being transferred to the new owner without our inputs.

“We are fighting for the adjustment of staff benefits under our agreement with Shoprite; this fight has been ongoing for years.

“We want to sit down with the new investor to enter into a new agreement; that is what we want.

“All we need is for Shoprite management to give us our right, which could either be payoff or ex gratia.

“Management should not keep quiet and leave the staffers without taking care of their benefits,” he said.

Peter said that the workers were interested in the development and progress of the company, adding, however, that management should treat them well by settling them with appropriate ex gratia.

“There is a policy under labour law which says when a company is sold out, there are some benefits that the workers must get.

“But, we have discovered that nothing is coming to us from our management.

“We sent mails to them, trying to make enquiries as to what would be the fate of members of staff, but we were ignored.

“The union then gave us the go-ahead to hold a warning strike, which we embarked on Tuesday.

“The strike was suspended by 6 pm. that Tuesday, with a promise of roundtable dialogue by Shoprite management on Thursday, March 4,” Peter said.

One of the staffers, who craved anonymity, said that they were only waiting for the outcome of the negotiations on Thursday before determining the next line of action.

“If the outcome of the negotiation is not favourable to us, we will resume our indefinite strike before April 1, but we hope the issues will be resolved before then,” the worker said.

Another staff member, who simply identified herself as Grace, said “most of us have been with the company for between five and 10 years now, and the management didn’t let us know when the company was sold.

Grace said that management had earlier denied the transfer of ownership until it became glaring.

“They want to do the handing over by April 1 without paying our benefits. They cannot abandon us just like that.

“One of our supervisors said, ‘we have sold you people like tissue paper’. We are not properties; they cannot sell us.

“We are about 150 workers in this branch and there are people whose appointments have not been confirmed since they joined the company eight years ago.

“We are being paid peanuts, with no health insurance and gratuity; we only have pension, and we pay tax,” Grace said.

Some of the Shoprite customers, who spoke with NAN, expressed happiness that the store was eventually opened, with no escalation of the industrial action that took place on Tuesday.

“We hope that thee management will resolve the issues with their staff members on time, so that both parties will be happy at the end of the day,” they said.