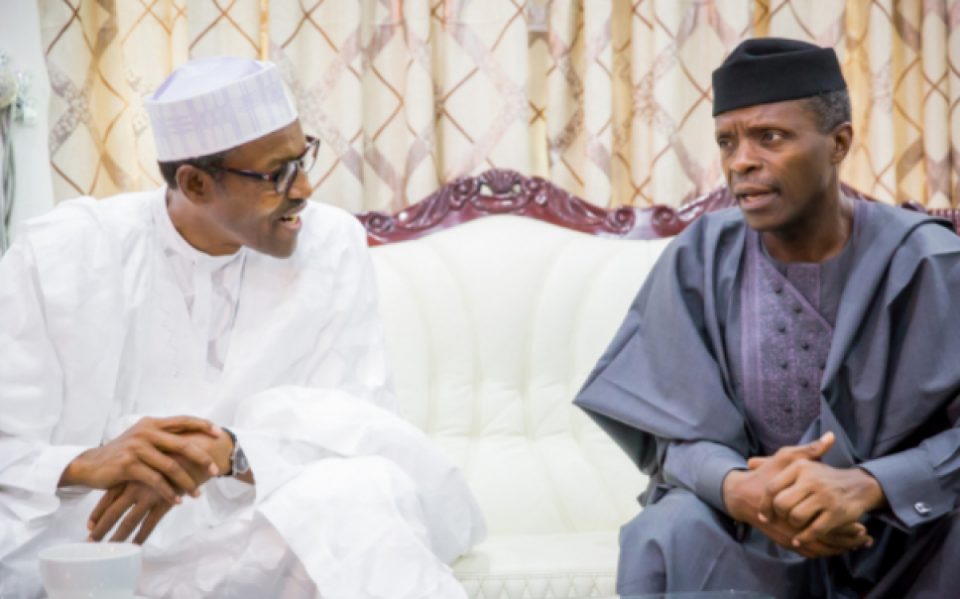 The President, Major General Muhammadu Buhari (retd.) and Vice-President Yemi Osinbajo will on Saturday be vaccinated against the deadly coronavirus.

The Executive Director of the National Primary Health Care Development Agency, Dr  Faisal Shuaib, who disclosed this during the second edition of State House weekly briefing held at the Presidential Villa, Abuja,   said Nigeria would begin to administer the COVID-19 vaccine to its citizens on Friday after a launch that would take place at the National Hospital, Abuja.

Shuaib said this as the Cross River State Commissioner for Health, Dr Betta Edu, in an SMS sent to one of our correspondents in Calabar  on Thursday evening, disclosed that  the Federal Government would on Monday in Abuja  distribute the vaccine to states.

Recall that Edu and her Plateau  State counterpart, Dr Nimkong Lar, had  told The PUNCH on Wednesday that  the Minister of Health, Dr Osagie Ehanire, would at a meeting in Abuja on Thursday  discuss with commissioners of health, the  sharing   of 3.94 million doses of the Oxford-AstraZeneca COVID – 19 vaccine, which the country received on Tuesday from  COVAX facility.

The facility,  an initiative co-led by the Vaccine Alliance, GAVI and the World Health Organisation,  seeks to ensure equitable access to a COVID-19 vaccine by dividing about two billion doses across 92 low-and middle-income countries.

The Cross River State commissioner of health, in response to  enquiries by The PUNCH at 6:30pm on Thursday,  stated that the meeting between minister and the commissioner was still going on.

She stated, “Meeting is still ongoing, but the number (of vaccines) for any state has not been determined  as the NPHCDA (National Primary Health Care Development Agency) has yet to get  complete lists  of health workers from states.

“The national rollout holds tomorrow (Friday) with strategic leaders receiving the vaccine on Saturday at the national level; states are to receive the vaccine on Monday. The amount not known yet; the NPHCDA is still awaiting the final lists of health workers from states which will inform the final decision for  the final number going to states.”

When The PUNCH correspondent called her back at 8:20pm, she said the meeting had ended, adding that amount of doses that would be given to each state had not been sorted out.

But  Shuaib  had earlier on Thursday  said the launch of the vaccination  would take place at the National Hospital, Abuja and the frontline health workers working in the hospital’s treatment centre would be the first set of people to be vaccinated.

Samples of the vaccine were handed over to the National Agency for Food and Drug Administration and Control for safety review on Tuesday after the country had received them. The result of the review was being expected as of Thursday.

The NPHCDA boss said with the review concluded, the next phase would be for his agency to begin vaccination.

He said, “The next step in the vaccination programme, given that we have now received the vaccine, is a launch that will be taking place at the National Hospital tomorrow (Friday). The time scheduled for that launch is 10am. The launch will be conducted by the Chairman of the Presidential Task Force on COVID-19.

Shuaib said with the launch over,    strategic leaders, such as the President and the Vice-President would receive the vaccine on Saturday.

He expressed the hope that public vaccination of the country’s leader would further increase the confidence of Nigerians concerning the safety of the vaccine.

He added, “After that (the launch), the plan is to vaccinate Mr President, Mr Vice-President and strategic leaders on Saturday.

“We are hopeful that when Nigerians see leaders like Mr President and Mr Vice-President take the vaccines; it will increase their confidence around the safety of the vaccine.

“As you are well aware that even before the vaccine arrived in Nigeria,  there was a lot of hesitancy. It is a global phenomenon. Vaccine hesitancy is similar, no matter where you are, you have to provide the right information and to those people who have questions, we cannot dismiss their cynicism.

“It is our responsibility as public health workers not to only offer the vaccine, but to also do extra-work in terms of providing the resources that are needed and to convince people that these vaccines are safe.”

Shuaib said once the strategic leaders had been vaccinated, attention would shift to states where leaders such as state governors would also be made to take the vaccine in public.

He, however, warned that his agency would not make vaccine available to states which had not met the criteria set for such.

He said the safety of the vaccine was paramount on the list of the requirements to be met by states before they can be certified to get the vaccine.

“By the time all of these happen, we would have finished all of the necessary preparations; we would have created a dashboard that will track very carefully the status of the preparedness of the states.

“We will not be sending vaccine to states that have not fulfilled all of the criteria that will ensure that if the vaccine  doses get to the states, they are going to be safe.

“We are also aware that during the #EndSARS vandalism, there were some cold stores that suffered. I know that state governors are trying to fix those but we have to verify that those are ready to receive our vaccines.

“We are working with the sub-national level; we are in conversation with the Nigeria Governors’ Forum to see how Nigerians can rapidly get their vaccines.

“It is very critical that we rollout rapidly so that we can cut into any kind of mutation that can lead to the development of resistance against our vaccines.”

Shuaib said 50 per cent of Nigerians had agreed to be vaccinated.

In his contribution, the Director-General, Nigeria Centre for Disease Control, Chikwe Ihekweazu, said although vaccination was key to the national response, other measures already in existence to curtail further spread of the virus would continue.

Ihekweazu said the agency would continue with testing, surveillance, protecting health workers, investing in national health security and driving risk communications among others.

The Director-General of NAFDAC, Mojisola Adeyeye, said since the arrival of the vaccine to the country on Tuesday, the agency had been carrying out series of checks to ascertain its efficacy.

She said her agency and the NPHCDA were working hand-in-hand to ensure a smooth roll-out on Friday.

She also warned that falsified COVID-19 vaccines are already in the global market.

“That is why NAFDAC is focusing on track-and-trace, to ensure no infiltration of substandard vaccines in supply chain.

“Traceability is very important; we can trace the vaccines from airport to the patient,” she explained.

The NAFDAC boss gave an indication that officials of her agency would be monitoring those vaccinated with a view to document their findings.

The minister of health asked Nigerians to continue with non-pharmaceutical measures despite the arrival of vaccine.

“We must look at vaccine as a game changer, but make no mistake that it is a replacement for everything else.

“It is an additional strategy. Vaccines are an addition to the existing response, not a replacement,” the minister warned.

He disclosed that the Federal Government planned to provide 10-bed Intensive Care Unit in every state of the federation, as part of strategies to provide critical response to the COVID-19 pandemic in the country.

Ehanire assured Nigerians that the focus on COVID-19 prevention and treatment would not wipe out the maintenance of normal routine vaccination.

The minister also said Nigeria was not just relying on charity for the supply of vaccines but has opened an account with AfreximBank, from where 370 million doses of vaccines for the continent would be sent and Nigeria expecting between 80 and 85 million doses.

The minister said the Federal Government was working towards immunising 70% of the country’s population in order to achieve herd immunity.

He said the purpose of continental arrangements being made for the procurement of vaccines was meant to ensure that no country is left behind.

He said, “The purpose of it (continental agreement) is that you also want your neighbours to be free.

“If we (Nigerians) are fully vaccinated and Benin Republic, Togo, Niger are not, we are still not quite safe because there is free movement among all these countries.

“So, it is in our interest to also see that all these countries are on the same page.

“That is why the West Africa Health Organisation is also pursuing the same initiative as the African Union and for that we are paying. We have opened an account with Afreximbank, the headquarters of Afreximbank is in Cairo and the account signatories are from both the Ministry of Health and the Ministry of Finance.”

Later in an interview with one of our correspondents on Thursday night,  the Minister of State for Health, Dr Olorunnimbe Mamora, said the Federal Government had asked states to provide a list of frontline health workers, traditional rulers, judicial officers and political office holders for the COVID-19 vaccine.

This was part of the resolutions made at a meeting between the Federal Ministry of Health and the 36 commissioners.

The minister said the Federal Government already had a list of its own health workers, adding that they would be among the first to receive vaccines.

He said states would not be compelled to receive the vaccines, adding that states must also have the capacity to store and administer the vaccines.

The minister said, “We cannot be talking of sharing vaccine doses right now until all the states have submitted their figures. We expect figures in terms of frontline health workers. We will also verify these figures for vaccine accountability. We need a database.

“We already have the names of health workers in federal institutions but the states must give us their own figures. We need a list of their strategic leadership such as governors, deputy governors, traditional rulers, judicial officers and others who we regard as strategic leaders.

“If they take the vaccine, it will give credence to issues of efficacy and safety. It is not about VIPs getting the vaccines first. So, it is not a question of elite. We are just following the global trend. Frontline workers, strategic leaders, the elderly and persons with co-morbidities will be those prioritised.”