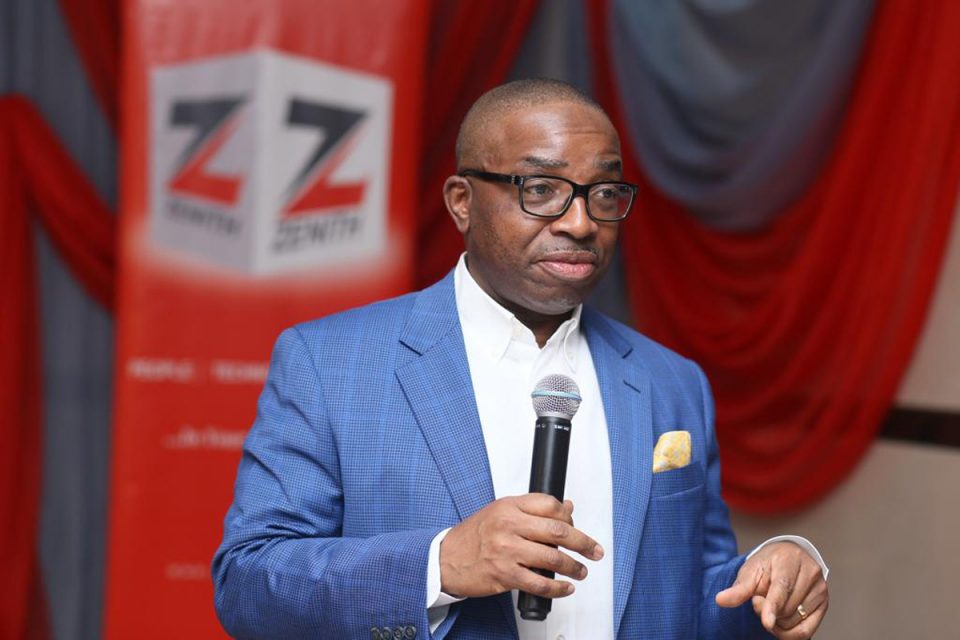 A statement by the bank issued to newsmen on Sunday, in Lagos, said Onyeagwu made the call in a keynote address at the Africa Investment Risk and Compliance Summit 2021, organised by the Emerging Business Intelligence and Innovation (EBII) Group on July 30 at the University of Oxford, U.K.

Onyeagwu, whose address was entitled: ‘Leveraging Impact Investment Opportunities for Growth in Africa’, described impact investing, as an investment that yielded optimal returns for investors.

He further described impact investing as value for all stakeholders and guaranteed continued sustenance and existence of humanity.

Onyeagwu decried the shallowness of Africa’s financial market as depicted by the fact that no African exchange was among the Morgan Stanley developed markets index, except for two in Egypt and South Africa, in the MSCI Emerging Markets Index, and only six African exchanges in the MSCI Frontier Market Index.

The Zenith bank’s CEO noted that although the International Finance Corporation (IFC) estimated that the global investors’ appetite for impact investing could total as much as $26 trillion, only approximately eight per cent of the assets of impact intent funds, were focused on Africa.

This is not significant enough, he said, adding that Africa appeared to be in the room, but not on the table, considering the fact that Africa was in dire need of investments, especially in the light of the continent’s 1.3 billion people representing about 17 per cent of the global population of about 7.8 billion.

He described Africa as “the new frontier” for global growth; making a case for increased impact investment in the continent because of its investment opportunities in agriculture, healthcare, housing, infrastructure, electricity, and the creative sectors.

Onyeagwu exuded optimism on the coming into effect of the African Continental Free Trade Area (AfCFTA) initiative, noting that this would create a single, continent-wide market for goods and services, business and investment, granting investors access to the entire continent.

The Zenith bank CEO also called the attention of investors to Africa’s rich natural endowments, which included 60 of the world’s uncultivated arable land that had enormous potentials for organic food production, and nine per cent of the world’s freshwater bodies.

“Therefore, I implore investors in the agribusiness value chain to focus attention on Africa for organic food production, instead of genetically modified food in other climes.

“For example, the bank has maintained strong advocacy for investment in Africa through its flagship sponsorship of “Inside Africa” on CNN for 16 consecutive years.

”This is helping to highlight the immense creativity and talent that abound on the continent and the enormous investment opportunities.

“The bank leverages its in-depth knowledge of the African market to guide investors and hedge their exposures,” he said.

In addition, he said the bank had been on a steady Environment, Social and Governance (ESG) investment journey.

Onyeagwu then called for a paradigm shift, as Africa remained work in progress and leaders in the public and private sectors must not despair, rather they should champion the changes they want to see, by paying close attention to responsibility and accountability in leadership.

He called for the de-risking of Africa through reforms, improved ease of doing business, respect for the rule of law and sanctity of contract and human capital development.

Onyeagwu expressed satisfaction with the several reforms of the Federal Government, including the Road Infrastructure Tax Credit Scheme (RITC) and the establishment of the Rural Electrification Agency (REA).

In particular, he lauded the Rural Electrification Fund (REF) and the Infraco Plc, among other development finance initiatives of the Central Bank of Nigeria

Why we focus on security, infrastructure dev’t -Buhari