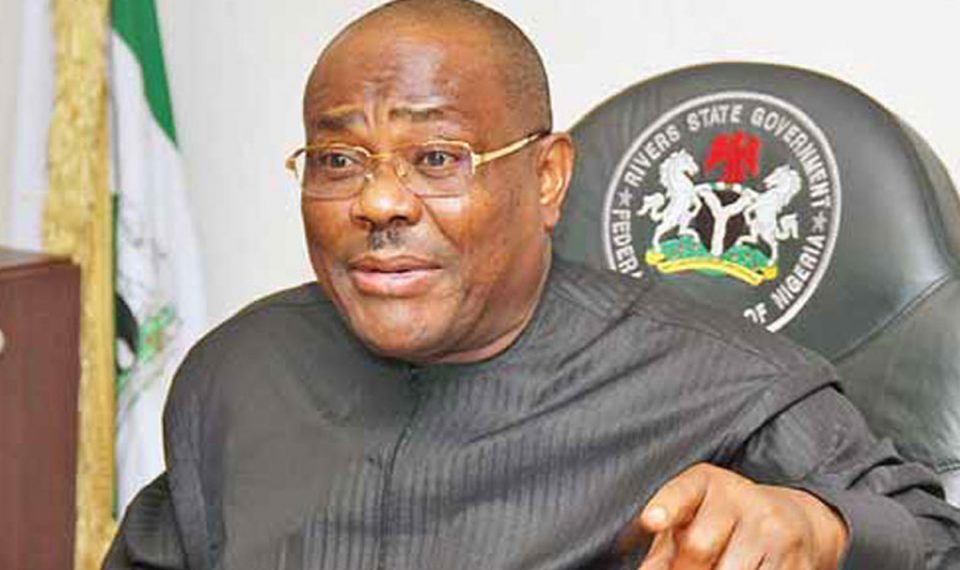 Governor of Rivers State, Nyesom Wike, has advised his counterparts that are begging the state and Lagos State to discontinue moves to collect the Value Added Tax directly.

Wike, in Port Harcourt on Monday, said the Federal Government and states that were appealing to Lagos and Rivers states to be their brother’s keeper, must first accept the illegality of the central government collecting VAT,  instead of states.

He stated this as the Gombe State Governor, Muhammadu Yahaya, while receiving the  All Progressives Congress stakeholders from the southern part of the state on Monday, said other states must wake up to reality on ground.

Yahaya noted that if the income from VAT ceased, the state government would not be able to pay salaries.

The battle for VAT started last month when the Federal High Court sitting in Port Harcourt in its judgment held that Rivers State had the right to collect VAT within its territory.

But in its ruling on an appeal filed by the Federal Inland Revenue, the Court of Appeal on September 10 ordered a stay of execution of the Federal High Court judgment.

Lagos State has asked to be joined in the appeal filed by the FIRS.

While some states have appealed to Lagos and Rivers states to be their brother’s keeper, the Katsina State Governor, Aminu Masari, dismissed moves by the states as a joke.

On Monday, Wike said Nigeria must encourage federating states to harness their resources and generate revenues.

The governor made the observation when the Managing Director and Editor-in-Chief of the SUN (Newspaper) Publishing Limited, Mr. Onuoha Ukeh led a delegation to present a letter of nomination to him as the SUN Man of the Year 2020 Award at Government House, Port Harcourt on Monday.

Wike observed that there were attempts to frustrate states like Rivers, to actualise the constitutional provisions that empower them to harness their resources and revenues, particularly VAT.

The governor decried the situation where the legality of states collecting  VAT was not considered on the merit of the law by some public commentators including state governors,  who were politicising it and looking at it from prisms of ethnicity and religion.

Wike said this in a statement issued by his media aide, Kelvin Ebiri titled ‘States must be encouraged to harness their resources, revenues to develop themselves—Wike’

According to the governor, what the FIRS is doing is illegal and could be likened to robbing states.

He stated, “You don’t even need to be a lawyer to know that VAT is not in items 58 and 59 of the second schedule of the 1999 Constitution as amended. Everybody knows that.

“It is not even in the concurrent list. Therefore, it falls under the residual list. It is not arguable. That yesterday nothing happened does not mean that today nothing will happen, or tomorrow something will not happen.

“Nigeria should encourage states to be strong enough to have resources to develop their states. We are in a federal system where we are practising unitary system. Everybody at the end of the month will run to Abuja to share money. Nobody comes back to the state to think, how do I develop my state”?

He urged those demanding a brother’s keeper consideration to first appreciate the position of the law and situate it rightly.

“Some people say, be your brother’s keeper. I have no problem in being my brother’s keeper. But why not come out and say, let us tell ourselves the simple truth. As it is being provided in the law, who is the person responsible to collect  VAT?

“When you agree to that, that it is the state, then we can sit down to look at the different problems of states. And not to say be your brother’s keeper while you’re doing an illegal thing, in disobeying what the law says you should not do,” the governor explained.”

We must wake up to reality –Gombe gov

In Gombe State, Governor  Yahaya on Monday said the move by both Rivers and Lagos states had awoken the state to the present reality.

Yahaya made this disclosure during the presentation of a certificate of credibility on his government by the APC stakeholders from the southern part of the state.

He said that the reason the two states could boast about VAT collection was because of the industries they had.

The governor stated, “If they (Rivers and Lagos states) are granted the opportunity to collect VAT, what are we going to do? We must wake up to the reality on ground.

“If income from VAT ceases, the state government will be unable to pay salaries” pointing out that 35 per cent of the state’s earnings were from VAT.

The Lagos State Government on its part said it was discussing with the relevant stakeholders on the implementation of  VAT in the state.

The state Commissioner for Information and Strategy, Mr Gbenga Omotoso, in an interview with one of our correspondents on Monday, said there was no basis for confusion on whom the organised private sector should pay their VAT to.

He said, “It is a question of justice, equity, true and fiscal federalism. Nobody should be confused about anything, all of that will be sorted out.”