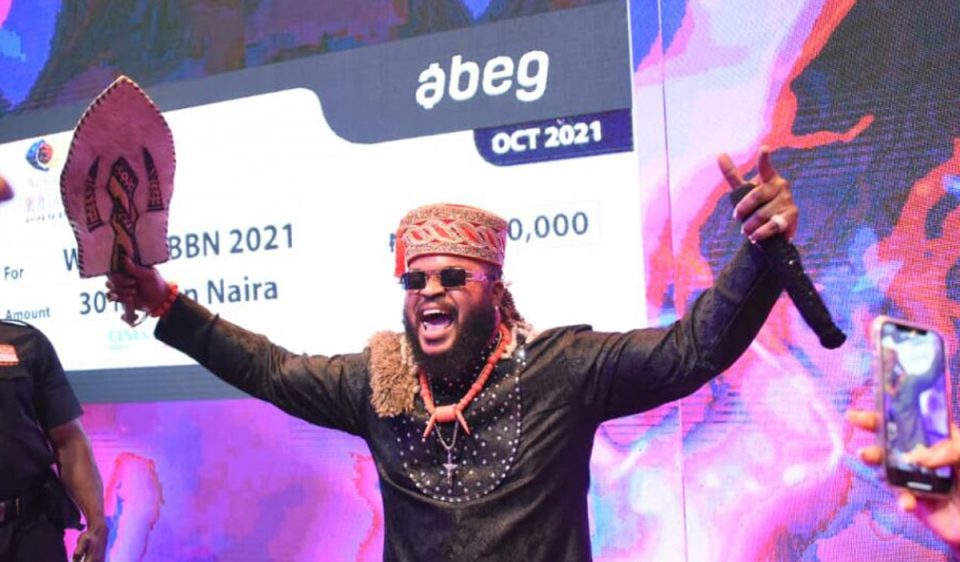 This was announced by Ebuka Obi-Uchendu, the moderator of the show, during the live grand finale show on Sunday.

Whitemoney has won N90million worth of prizes, no doubt the biggest purse for a reality television show on the continent.

The breakdown of the prize include a cash prize of N30million, two bedroom flat courtesy of Revolution Plus Properties, Innoson IVM G40, Travelbeta travel package for two to Dubai including airport transfer and tours.

Also, Cash in Abeg wallet, cash prize from Patricia, a weekend of getaway to Seychelles, courtesy Diageo; Arla makers of Dano will provide cartoons of Diary products; and Pepsi supply for one year and merchandise.

Others are packs of Munch it and merchandise; Techno products including the Techno Phantom X mobile phone; WAW detergent cartons; Hawaii soap products and other consolation prizes.

Liquorose emerged the first runner up for the season 6 edition of the reality show.

Big Brother (Biggie), the coordinator of the show, commended the resilience and commitment of the last six housemates – Pere, Emmanuel, Whitemoney, Angel, Liquorose and Cross.

Biggie described Angel as the hottest girl in the house, Cross as the life of the party.

He also described Liquorose as Dancer extraordinary, Pere as laugher turned finalist, and the General, Whitemoney as the resident chef and Emmanuel as Mr Africa, Mr Ultimate Veto Power Holder.

Emmanuel, who was first evicted during the finale show, said he was ready to embrace career around modeling and fashion.

Angel, the second housemate evicted, said she would love to start mental health blog and invest in real estate.

Cross, the third to leave the house, said he would be involved in any form of entertainment and politics.

He said his favorite moments in the house were when he won the super commando challenge and when he was picked by Emmanuel as the deputy head of house which automatically saved him from being evicted.

“I want to invest in myself, to help my mum and to be the best version of myself,” he said.

The television reality show started on July 24, a journey of 10 weeks, and 24 housemates featured on the `shine ya eye’ edition.

The finale show had LAYCON, ex-housemate of Season 5 edition, performed to the delight of the audience and fans of the housemates.

Liquorose born Roseline Afije in 1995, the young lady is a jack of many talents; she is a choreographer, entertainer, model, and video vixen.

One of the fans’ favourite, the native of Edo State noted that she discovered her passion and talent in the entertainment industry quite early enough and she didn’t hold back in pursuing her career.

She made her debut as an actress when she was featured in the award-winning, Nigerian TV drama series, The Johnsons, in 2012. Fast-forward to 2015, she starred in the movie ‘The OAP’ and a short film titled ‘HEX’ in 2016.

As a video vixen, some of her notable works include her feature in the music video ‘Chop Am’ by Reekado banks, ‘Yo Yo’ by Selebobo, ‘Oh Oh’ by Runtown, ‘Jalla’ by Xcellente featuring Solid Star, among others.

Liquorose was an established name before she headed into the Big Brother Naija house as she is one of the trio of the Girls Got Bold dance crew.

Nigeria @ 61: Low productivity cause of insecurity, unemployment in Nigeria – CeProd