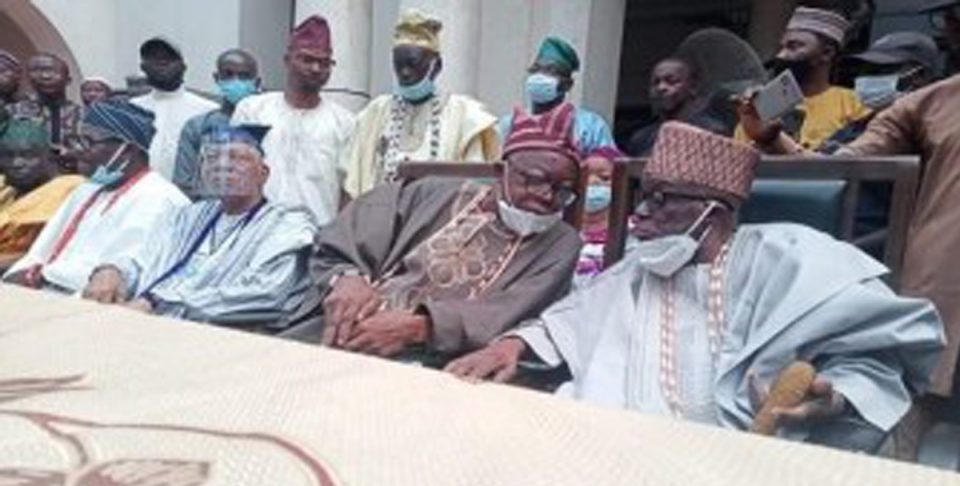 The eight High Chiefs and Baales crowned by late Governor Abiola Ajimobi in 2017 have dropped their crowns after agreeing to revert to the old system.

The decision was taken at the meeting of the Olubadan-in-Council held at the Oja’ba palace of the Olubadan of Ibadan land, Mapo Hill, Ibadan on Thursday.

The meeting was also attended by coronet-wearing Baales promoted with the High Chiefs as well as some Mogajis.

The Osi-Balogun, High Chief Tajudeen Ajibola, who briefed reporters on the outcome of the meeting, explained they supported Governor Seyi Makinde’s decision to revert to the original concept.

He recalled that the process of nominating the next Olubadan, which the kingmakers concluded on Tuesday and passed to the government, was done according to the original concept under reference, disclosing that all the kingmakers signed their respective titles as high chiefs.

He said: “We agreed with the Governor. All the processes leading to the nomination of successor to the late Olubadan were in line with the original concept of line of hierarchy in accordance with the Olubadan Chieftaincy Declaration.”

Ajibola, who is one of the Kingmakers, posited that commenting on the case in court “is subjudicial” noting ”it has nothing to do with the original concept of hierarchical status in the succession plan to the Olubadan throne.”

He maintained that what was taken to court was an infringement on the fundamental human rights of the respective plaintiffs, asking the court to determine the lawfulness of judging a case in the absence of the direct beneficiaries of the issue in contest.

Ajibola said the Governor could do his job in line with the Olubadan Chieftaincy Declaration while the case in court, which was adjourned for further hearing, is allowed to run its course.

Read Also: My encounter with Sunday Igboho in Cotonou prison, by Ibadan-based cleric

The new decision will end a four-year controversy over wearing of beaded crown and coronets by High Chiefs selected Baales respectively.

The administration of the late Governor Abiola Ajimobi had undertaken a review of the Olubadan Chieftaincy Declaration.

The review elevated High Chiefs to Obas as well as selected Baales.

The review also collapsed the steps to the Olubadan throne by half to enable the system produce younger persons as the Olubadan.

A consent judgment on the suit nullified the review.

The High Chiefs challenged the judgment, insisting that they were not part of those who made agreements that became the consent judgment.

The issue developed into a controversy on who succeeds Oba Adetunji with Ladoja’s lawyer Michael Lana warning Governor Seyi Makinde against approving the choice of Otun Olubadan High Chief Lekan Balogun who is next-in-line as the next Olubadan.

The Governor, however, directed that the system should revert to the original concept when he paid a condolence visit to wife of the late Oba Adetunji on Tuesday.

The meeting of the High Chiefs was in deference to the order.

Six of the members of the Olubadan-in-Council attended Thursday meeting.

They were joined by 20 Royal Highnesses and 15 Mogajis.

Egina project, a testimonial of Ease of Doing Business – Osinbajo

Nigeria, 3 others get £16.2m UK grant to fight plastic pollution

The council of state should meet now