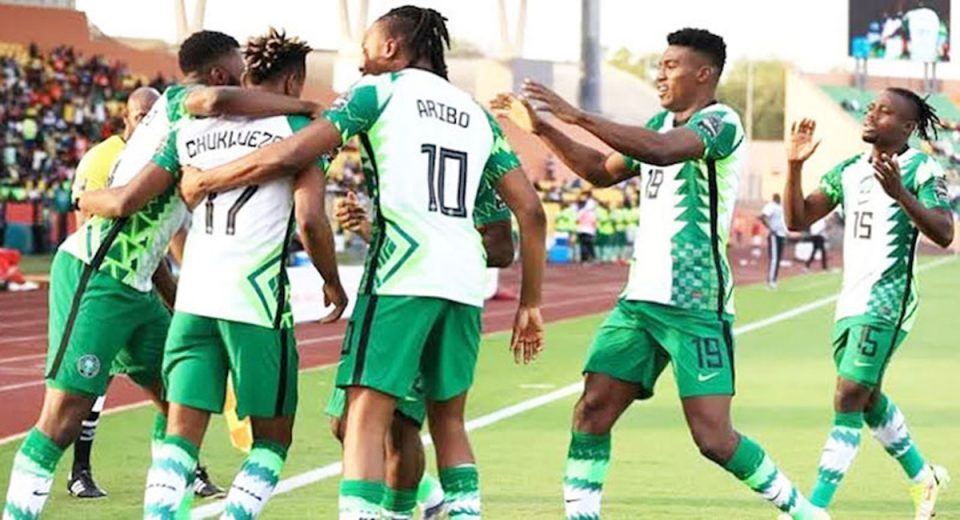 Super Eagles defeated Sudan 3-1 yesterday to qualify for the Round of 16 of the 33rd Africa Cup of Nations in Cameroon.

Goals from Samuel Chukwueze, Taiwo Awoniyi and Moses Simon lifted the three-time African champions over Sudan’s Falcons of Jediane at the Stade Roumdé Adjia in the northern Cameroonian town of Garoua.

On a day many Nigerian football fans were looking forward to the roasting of the Falcons given how Super Eagles fared against Egypt and their star forward , Mohamed Salah, in the opening Group D match, Augustine Eguavoen and his wards gave good accounts of themselves.

Eagles started with that air of superiority as former U17 World Cup winner Chukwueze rolled the ball elegantly past goalkeeper Ali Abdalla Aboeshren in the second minute to record the fastest goal of the competition so far.

The Sudanese did not bow their heads in self-pity, and instead showed some delightful passing game, possession football, competence in launching fast counter-attacks and also hinting at some ambition.

With hindsight, Eagles knew an early ticket to the Round of 16 was at hand. They rolled the ball easily on the natural grass and for large swathes of the evening bossed the game, with right back Olaoluwa Aina characteristically joining the attack when it appeared safe and Wilfred Ndidi and Joe Aribo working hard to keep things moving in the middle.

Before Awoniyi found the net for Nigeria’s second goal in the 45th minute, Nigerians thought their team had scored a second in the 36th minute when Chukwueze and Iheanacho combined on the right side of the field and got the ball past Aboeshren, only for the ball to miraculously head out of the net in a hazy melee.

Simon, who dazzled to no end against the Pharaohs but was somewhat curtailed in the first period, switched to a higher gear at the beginning of the second half and was assisted by Awoniyi, who chested down a short lob to free the France-based forward for a close encounter with Aboeshren that the goalkeeper emerged the loser, as he had to pick the ball from his net.

Six minutes later, Awoniyi fluffed a good opportunity to make it four, wasting a split second before making contact with the ball from a counter attack.

In the 70th minute, South African referee Victor Miguel Gomes judged that Aina had tripped a Sudanese defender in the Nigerian penalty area during a corner, and awarded a penalty to the Falcons, which was converted by substitute Mohamed Hussein.

On Wednesday at the same venue, the Super Eagles will take on the Wild Dogs of Guinea Bissau, debutants at Africa’s flagship football competition, in their last match of Group D.

Ports of Pains, Delays and Costs.

Tambuwal orders arrest of musician for singing praises of bandit