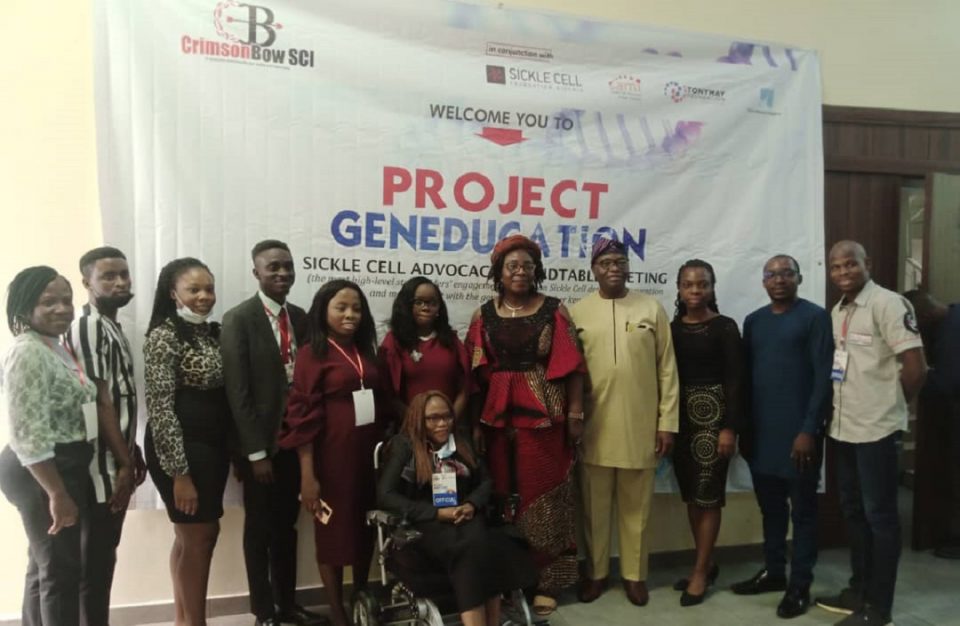 Sickle Cell-based Non-Governmental Organisations and healthcare practitioners on Thursday advocated increased advocacy and government interventions towards managing Sickle Cell Disease (SCD) in the country.
The NGOs and medical experts made the call at Project GenEducation, a Sickle Cell Awareness, Education and Advocacy  Roundtable Meeting oganised by CrimsonBow SCI, a Resource Community for Sickle Cell Warriors.
The meeting, which brought together various stakeholders in the fight against sickle cell dissease, was sponsored by Ford Foundation.
The high level engagement was organised in conjunction with Sickle Cell Foundation Nigera, Sickle Cell Advocacy and Management IInitiative,, TonyMay Foundation, Genotype Foundation among others.
The event, tagged “Sickle Cell Advocacy: Partnership for Healthcare and Inclusiveness”, had in attendance various healthcare practitioners in the state and federal ministry, department and agency of health, aside those who joined virtually.
Speaking, Miss Timi Edwin, the Founder and Chief Executive Officer, CrimsonBow SCI, said over 13,000 people had been positively affect in the sickle cell advocacy, with support of various NGOs.
Edwin, who noted that the mission was to inspire hope and support for sickle cell patients, called for more commitment from government and lawmakers on awareness and interventions toward improving quality of lives of people living with SCD.
The founder, who is also sickle cell patient, lamented the crisis and financial burden of managing the disease.
He, however, commended the government’s efforts on new born screening, saying such should be extending to adults at free of little charge in across healthcare facility.
On insurance, she called for free  insurance for sickle cell disease, adding that its management could be difficult for the poor masses.
Delivering a keynote address, Prof. Akin Osinbogun, Chiarman, Lagos State Primary Healthcare Board, said that sickle cell dissease could be an economic burden, calling for prevention through massive advocacy and awareness.
Osinbogun, whose speech was delivered by Dr Abdulkabir Adegoke, Senior Resident and Chief Resident, Department of Community Health and Primary Care, Lagos University Teaching Hospital, said that the studies had reported the prevalence of the Sickle Cell trait in Nigeria to be as high as 25 per cent.
According to him, this implies that 1-in-4 Nigerians have the trait and 1-3 per cent have sickle cell disease.
He said that a 1982 study had estimated that about 30,000 babies are born annually in Nigeria with SCD, saying “The numbers will be even higher now given the increase in the Nigerian population.
“This huge disease burden is also an economic burden in terms of the cost of managing this chronic condition.
“The cost of managing sickle cell dissease is so high, the best option is prevention. Sickle Cell disease affect a large number of Nigeria but it can be prevented.
“It is therefore important to make information available to individuals, families and communities to reduce the likelihood of couples having HbSS babies.”
He said that it was equally important to make information about treatment options and advances in management available to patients with SCD and their relatives.
“High level advocacy to policy makers and purse holders is indeed very important to ensure that the investments required for prevention, control and management of SCD are made.
“I commend the Lagos State Government for its support to the LUTH Bone Marrow Transplantation Centre. This is testimony that advocacy works.”
Dr Alayo Sopekun, Desk Officer, Sickle Cell Control Programme, Federal Ministry of Health, said: “We still need to do a lot more in awareness creation, advocacy and in improving the quality of life for those who are living with Sickle Cell Disease.
“We must ensure that we reduce, however it is going to be, out-of-pocket expenses for them.
“We should provide a lead in intervention and advocacy. It is better we prevent it than managing it.”
He said that the ministry, asides expanding the national immunisation programmes vaccines for prevention and reviewing of essential medicine list, had been screening new born babies for prevention of SCD.
Sopekun said that the cost of managing SCD informed the call for the review of the NHIS by the National Assembly to provide a scheme that works for everyone including NCDs.
Also speaking, Dr Olurotimi Agbolagorite, Director Public Health, the Lagos State Ministry of Health, who applauded the state government’s efforts in the fight against SCD, called for more training of specialists to prevent further spread of SCD.
Agbolagorite represented by Dr Abosede Wellington in charge of Non Communicable Disease (NCD) said that Lagos had been doing a lot on sickle cell dissease especially on blood transfusion, calling for collaboration of relevant stakeholders.
Agbolagorite, who called for adequate counselling services for people, especially intending couples, said: “Counseling and advocacy on genetype screening will a long way.”
Also speaking, Dr Moyo Olomola, from the Health Insurance Inclusion for People Living With Sickle Cell, said that Health Management Organisations (HMOs) had been making finances of sickle cell affordable.
Olomola said: “We can improve their quality of life. We advocate that they all subscribe. It has a lot of benefits for the patient to live quality life.”
An expert, Dr Chris Otigbuo said that medical, nursing, pharmacy and health technology schools should have indepth medical education on Sickle Cell Disease to be able to manage the patients.
Otigbuo said that if tuberculosis patients could have their drugs free, the sickle cell patients should also have, calling for decisive role by the government at all levels to support SCD.
Dr Makinde Akinlemibola, the Chairman of the Association of Nigerian Private Medical Practitioners, Lagos State said that everybody  should be enlightened concerning sickle cell dissease, considering the prevalence of Sickle cell.
Akinlemibola said: “There is the need to continue to enlightening people to put SCD in public space. It is necessary to create fund for the patients.
The Wife of the Lagos State Governor, Dr Ibijoke Sanwo-Olu, represented by Dr Juliana Olusanya, Medical Director, General Hospital, Ebute Meta, commended various stakeholders called on stakeholders to play their role to reduce the risk of SCD.
previous post

COVID-19: WHO, IOC partner on “healthy together”