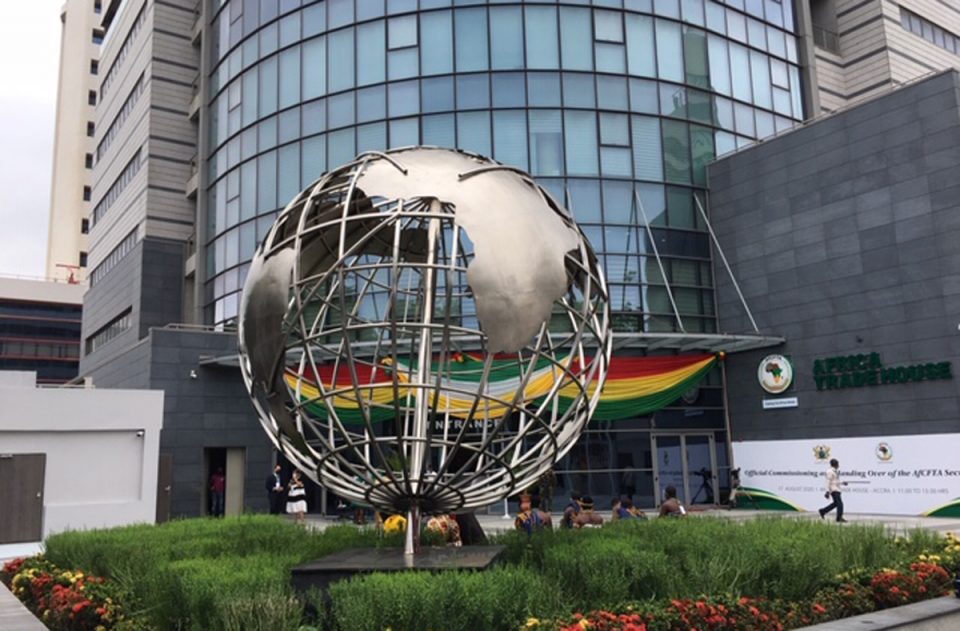 The African Import and Export Bank in its recent report argued that the African Continental Free Trade Area would be the game changer in driving Africa’s industrialization, writes Dike Onwuamaeze

The African Export and Import Bank (Afreximbank) has affirmed that the African Continental Free Trade Area (AfCFTA) agreement would be the continent’s industrial accelerator. It stated unequivocally that, “AfCFTA will accelerate the growth of labour-intensive manufacturing industries.”

The Afreximbank’s affirmation was contained in a report it published in this month, which was titled “Africa’s 2022 Growth Prospects: Poise under Post-Pandemic and Heightening Geopolitical Pressures.” It said in the report that the AfCFTA agreement would usher in a period of renaissance in African manufacturing sector and become a critical driver of African economic growth in the near-term.

The report identified East and West Africa as the regions manufacturing would play a critical role in sustaining economic growth. “The sustained injection of patient capital and rise of East Africa’s automotive industry is helping to expand opportunities for labour-intensive employment under a proven manufacturing-led growth model and will expand the fiscal space to gradually strengthen the foundation of macroeconomic stability,” the report said.

Turning to West African sub-region, the report said that despite the protracted negative effects of conflict and insecurity, especially in the Sahel region, members of the Economic Community of West African States (ECOWAS) are also expected to enjoy robust growth in 2022.

“The sub-region will be supported by the usual assortment of strong performers (Benin, Cote d’Ivoire, Ghana, Guinea and Senegal), and by Nigeria, where the purchasing managers’ index (PMI) rose sharply to 57.3 in February 2022, the largest expansion since November 2019. The telecommunications and financial services sectors, as well as extensive investment in strategic industries, are enhancing growth resilience in Nigeria. The oil sector, too, will benefit from a gradual easing of OPEC production cuts and higher prices, which have received another boost from the Ukraine crisis. The latter are expected to remain above the country’s fiscal breakeven price of $62 per barrel, “it stated.

The report added that the Central Bank of Nigeria’s loan to deposit ratio (LDR) policy would spell a boon for micro, Small and Medium Enterprises (MSMEs), especially those in manufacturing.

The report, which was authored by the Chief Economist and Director of Research at Afreximbank, Dr. Hippolyte Fofack, stated that trade integration reform would reinforce macroeconomic stability across Africa as the agreement on the Rules of Origin, which would become effective later this year would accelerate the diversification of sources of growth and trade.

A section of the report, which was sub-titled, “The AfCFTA as the Industrialisation Accelerator,” projected that AfCFTA would increase the value of African automotive market from $30.44 billion in 2021 to $40.06 billion in 2027.

The report also highlighted that AfCFTA would awaken the revival of industrialisation of African economies and also deepen and create an increasingly competitive regional value chains; it would also facilitate the emergence of more resilient supply chain and add more value chains through backward activities.

The report emphasised the role of the manufacturing sector in this projected economic growth. It said: “Moreover, AfCFTA will bolster sustained welfare improvement, with the rise of a strong manufacturing base which has been a catalyst of increasing opportunities for labour-intensive employment acting as an elevator out of poverty.

“Africa’s industrial and manufacturing output, which went through a long period of sustained decline towards the end of the last century, giving rise to the premature deindustrialisation argument reversed course a decade ago and has been increasing steadily since.

“Expressed as a share of GDP, manufacturing exceeds 12 per cent according to most recent estimates, up from less than 10 per cent a decade ago, having declined from 17 per cent when Structural Adjustment Programmes (SAP) was introduced in the early 1980s.  The revival in manufacturing’s fortunes has been strong, especially after adjusting for income and population. Since 2000, manufacturing output has risen 91 per cent in real terms.”

The report said that manufacturing share of the continent’s exports has expanded as well, from 35.5 per cent in 2008 to 54.2 per cent a decade later, with exports becoming increasingly more integrated into global value chains

It noted that the sectoral drivers of manufacturing in the continent have also witnessed increasing diversification, extending beyond traditional original equipment manufacturers (OEMs) of products with low degrees of automation such as leather, footwear, and garments to include technology and fintech industries, which are driving digitalisation and more sophisticated industries with greater potential for structural change.

The bank stated that the growth in technology and fintech industries have become increasingly important and accounting for around half of Africa’s growth in output per worker in the first decade of this century.

In addition to the emergence of strategic industries such as refineries and cement, the automotive sector has become a magnet for patient capital. “After Volkswagen established a car manufacturing centre in Rwanda, Peugeot and Opel followed suit by opening plants in Namibia to assemble up to 5,000 vehicles per year.

“Ghana, too, is now home to assembly plants from Nissan and Volkswagen. Meanwhile, Morocco has been extremely successful in developing its car industry, with around 80 per cent of its exports oriented towards Europe and the rest to domestic and regional markets,” the report said.

In addition to boosting FDI inflows, empirical evidence has shown that joining a free trade area could raise them by around a quarter.

Relatedly, through improving economies of scale, the free trade area will afford companies more opportunities to spread the risks of investing in smaller markets.

The report stated that in some countries, output would continue to expand above regional and world averages, being “supported by the increasing diversification of sources of growth that is expanding manufacturing output and trade.”

It referred to the World Bank’s estimation that the AfCFTA’s reform has the potential to increase Africa’s exports by $560 billion mostly in manufacturing, and boost Africa’s income by $450 billion by 2035.

In addition to transforming the region’s productivity landscape, the AfCFTA promised to deepen and create new and increasingly competitive regional value chains, as well as to facilitate the emergence of more resilient supply chains.

It would also add more value to the continent’s commodities to integrate global value chains through backward activities, especially in the automotive industry that would play a key role in structural transformation.

“Estimates have shown that the value of the African automotive market would reach $42.06 billion in 2027, up from $30.44 billion in 2021, propelled by large economies in East Africa, including Ethiopia, Kenya, and Tanzania. Ethiopia is slated to achieve the most impressive growth, with demand increasing from 30,380 units in 2020 to 112,814 in 2035,” the report said.

The Afreximbank’s report also observed that African governments are beginning to wake up to the responsibilities to aid economic growth.

It said: “To support the AfCFTA’s implementation and capitalise on its growth potential, governments are developing critical economic infrastructure. This includes the expansion of special economic zones (SEZs), which have been instrumental in other parts of the world, most notably Asia, in developing regional value chains and boosting countries’ participation in global value chains.”

According to the United Nations Conference on Trade and Development, the numbers of African countries with SEZ programmes have increased from just four in 1990 to 47 in 2020, with most nations hosting several SEZs.

A growing number of countries are executing plans to improve domestic production capabilities in manufacturing. In Zambia, the national strategy for the AfCFTA’s implementation recognised the critical importance of MSMEs as drivers of growth and export diversification and is facilitating their integration into regional and global value chains.

At the regional level, countries are coordinating their efforts for greater policy alignment. For instance, regional economic communities are working towards more united strategies, starting with industrial policy and trade partnerships with OEMs, and developing mutually beneficial bilateral and multilateral country agreements.

The report stated that two other factors would further accelerate Africa’s manufacturing renaissance under the AfCFTA: first, the reordering of global supply chains, which has been accelerated by both the COVID-19 pandemic and geopolitical realignments, which could lead to the emergence of competing blocs with distinct technological standards and cross-border payment systems.

The report identified the second factor as the changing nature of China-Africa engagement. It said that despite the cost advantages of the just-intime global supply chain model that is characterised by lean inventories and outsourcing to low-cost locations, the pandemic has highlighted its inherent risks and encouraged a shift towards the regionalisation and ‘friend-shoring’ of supply chains.

“Combined with the rules of origin that prioritise ‘Made in Africa’ goods, the reordering of supply chains offers another opportunity to accelerate domestic manufacturing in support of intra-African trade.

“The changing nature of engagement, namely emphasising trade and investment promotion, announced during the eighth Forum on China-Africa Co-operation held last year in Senegal will bolster Africa’s manufacturing boom. The Chinese leadership has decided to raise its annual imports from Africa to more than $300 billion, up from $105 billion in 2021 over the next three years and shift compositions to increase the manufacturing content of those imports.

“This includes the injection of $10billion in major industrialisation and employment promotion projects in Africa, direct support for the growth of African MSMEs and the establishment of a cross-border renminbi centre.

“Beyond reducing the excessive dependency on commodities to rebalance China-Africa trade, such measures will accelerate the process of technology transfer and raise productivity. Ultimately, this will enhance Africa’s integration into the global economy, in no small part because global trade growth has historically been higher in more technology-intensive sectors,” the report said.

Autonomy: Why governors are yet to comply with Executive Order 10