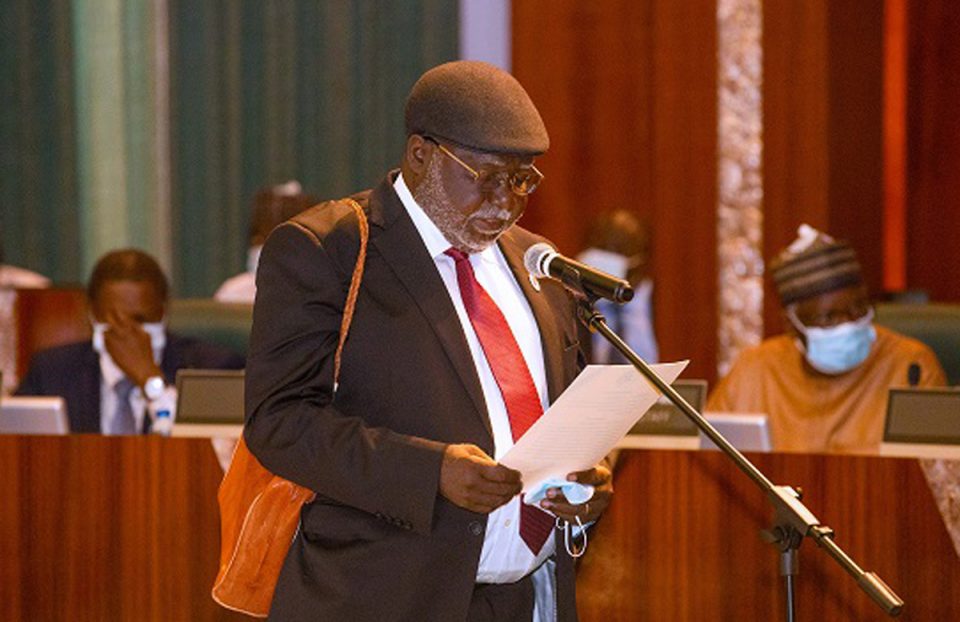 After the swearing-in of Justice Olukayode Ariwoola as the acting Chief Justice of Nigeria on June 27, 2022, pictures of past CJNs during their swearing-in resurfaced on social media. The pictures showed the senior Justices of the Supreme Court with leather-like tan bags hung on their right shoulders as they took the oath of office.

This has caused an unusual curiosity on social media and left many wondering: What really is contained in this ‘mystery’ bag and why has it become a regular feature of the swearing-in of Chief Justices of Nigeria? Is it for fashion? Is it a must-carry item during swearing-in?

First, the Special Adviser to the Lagos State Governor on Drainage and Water Resources, Joe Igokwe, in a social media post, wondered what was in the ‘special bag’ the current CJN carried as he took the oath of office.

A similar bag was spotted when the immediate past CJN, Tanko Muhammad, was being sworn in, in 2019. Retired Justice Aloma Mukhtar, the country’s only female CJN, who served between 2012 and 2014, was also known for carrying a similar bag.

Aloma’s successor, retired Justice Mahmud Mohammed, who served as the country’s 14th CJN, was not left out in the tradition of carrying a small leather bag.

But Mohammed’s successor, Justice Walter Onnoghen, who was in office between 2017 and 2019 when he unceremoniously left, appeared to be an exception in the CJNs’ tradition of carrying the small leather bag.

Curious Nigerians, who have forever wondered why the CJNs carry the leather bag and what it contains, have tagged it various funny names.

In reaction to Igbokwe’s post, some Facebook users labeled the bag ‘hunter’s bag’; while some others said it was a bag used to ‘swag up’ the white-on-black outfit usually worn by lawyers.

However, some others attempted to suggest what the content of the bag is and its significance.

For instance, @ZeeEsq wrote: “The Acting Chief Justice of Nigeria, Ariwoola Olukayode. My Lord is fresh and with his picky blender cap, nice suit, classy glasses and a shining handbag. Why do they always carry handbags? I think it is for the Bible or Quran and other documents. Plus na swag!” (sic).

Also making an attempt, a Facebook user, Enwerem Emeka, wrote: “They don’t want to carry the Bible or Quran in the hand the usual way, so they hide it, which, however, makes the oath ineffective.”

Expressing curiosity, a tweep, Baba Orirede, wrote: “I wonder what Chief Justice of Nigeria is doing with this bag.”

Similarly, another user, Adeyemi Oluwatosin, wrote: “What is it with these bags Chief Justices of Nigeria carry and the cap they wear? Is it a rule? Goodbye Tanko and welcome Olukayode.”

Online sources through the website of the British Library indicated that the special bag is referred to as the ‘Saddle bag Qu’ran.’ It is believed to have originated round the 18th and 19th century.

It is originally in leather and has a strap tied around both edges so it can be hung around the shoulders like tote bags. It is also called the ‘Sharia bag’ because it is said to contain original manuscripts of the Qu’ran written in Arabic.

“This Qur’an is typical in style of a wide area centred on the city-states of Hausaland and the Bornu empire (today, northern Nigeria, southern Niger and Chad).

“This was one of West Africa’s many centres of manuscript production. The manuscript is loose-leaf and kept in a leather bag. This allowed individual pages to be read while travelling, or to be lent out and learned by heart. It is divided into four pages displaying large illuminations. Qur’ans from Bornu were especially sought-after and were exported to North Africa and the Middle East,” part of the article read.

Some senior lawyers also commented on the issue, clarifying the perceived mystery around the leather bag.

Speaking, Mr Ahmed Raji (SAN) said the bag was used to carry the Qur’an, stating that it was also used to show respect for the holy book.

He added, “The bag has a Quran inside and nothing more. It is out of respect for the holy book. It is only for Muslims who want to be sworn in using the Quran.  A  Christian will hold the Bible, whereas someone who is neither a Muslim nor a Christian may affirm. Everyone is allowed to make a choice according to his/her religion or belief.’’

This may explain why Justice Onnoghen didn’t have the bag on during his swearing-in.

Raji further said, “The bag is always there in the Villa Council Chambers for use when required. You don’t go with any bag from your home. I accompanied the acting CJN to the chamber for his swearing-in. He didn’t go there with any bag.”

Also speaking, an Abuja –based lawyer, Mr Hayatuddeen Mustapha, said, “As a northerner and a Muslim, you will be familiar with that type of bag either at home or in court. It is called the ‘jakan-dalailu.’ ‘Jaka’ is ‘bag’ in Hausa so to qualify it with something else, you add an ‘n’ after it.”

Mustapha also said that the bag was usually made from leather material. He stated, “There is no reason for the use of leather other than it seems like it lasts better than most materials. The Qu’ran in this jakandalailu is handwritten and not printed. It is wrapped in a material and kept inside this bag for safety so that the pages do not get damaged.

“There is another leather also used to wrap the papers which are put in the bag. It is not just for lawyers or Chief Justices. Even if they have adopted it somehow in the Supreme Court to be used to swear-in Muslim justices, it is basically for keeping the Qu’ran.”

The lawyer also stressed that the bag must be hung on the right shoulder except in rare circumstances.

He noted, “It has to be hung on the right hand to give reference to the Holy Book. Inasmuch as people say we are a secular state, we practise religion in every aspect of our lives. When we swear an affidavit or even in court when we want to give a testimony, we either swear with the Bible, Qur’an or you affirm. That goes on to the swearing-in of the CJN.”

Another lawyer, Mr Hussaini Hussaini, said that under the law, people were being sworn in into certain constitutional offices, based on their respective religion. Hussaini added, “Even when the President, Mohammadu Buhari, was sworn in, he hung the bag. There is a process on how public officers would be sworn.

“That bag contains the handwritten Qu’ran. So, it is usually so big and it is fixed in that bag. So, instead of them to hold it in their hands and also read the oath of office, they just hang it on their shoulders.”

Another senior lawyer, Yusuf Ali (SAN), said putting the Qur’an in that bag was an act of reference to the holy book.

“The bag is not part of the legal dress code or anything. It is the Qur’an. The CJNs you see with that bag are Muslims. You know you cannot just hold the Qur’an in your hands like that carelessly, which is why they devised a method to put it in a bag, so one can just hang it. If you are a Christian, you may be given a copy of the Holy Bible.

“It is an act of reference for the holy book. The thing is that when you are being sworn in, you are supposed to hold either the Qur’an or Bible on your left hand and the oath on your right. I am a Muslim and I know one cannot hold the Qur’an that way, so this way is better and easier. It is hung on the right hand.”

An ex-Nigerian Bar Association’s Secretary, Mr Afam Osigwe (SAN), noted that the CJN do not have to bring the bag from home because it resides at the Presidential Villa.

“It contains the Qur’an. From my understanding of it, it is just like one is asked to hold the Bible and swear an oath. So, it is probably the one at the Presidential Villa for such an occasion or oath. They come in a leather-skin bag.

“The Muslims can choose to carry the bag on their right shoulders. It is not peculiar to the legal profession. The first time I took note of that bag was when Justice Mustapha was sworn in and interestingly, most of the other Chief Justices have been Muslims so that is why the bag has continued to become a recurring feature.

“When Onnoghen was sworn in, he did not carry the bag because the Bible is not usually placed in a bag for such occasions. I may not know what Islam says about oath-taking, but I know the religion pays attention to the attitudes around handling the Qur’an; how you handle it and what you do with it.”

On his part, however, Chief Mike Ozekhome (SAN), said the bag was just an act of copycat, where a new CJN wants to be like the predecessor.

Ozekhome said, “I really don’t know the significance of the bag. Some people say it is used in keeping either the Holy Bible or Holy Quran. But it’s recurring as a recycling object that is now raising Nigerians’ eyeballs.

“To me, there is nothing to it as a spiritual relic. It does not look to me mystical, talismanic, transcendental or religious. It appears to be a matter of style and ‘copy-catism’, with each CJN wanting to be like his predecessor.”