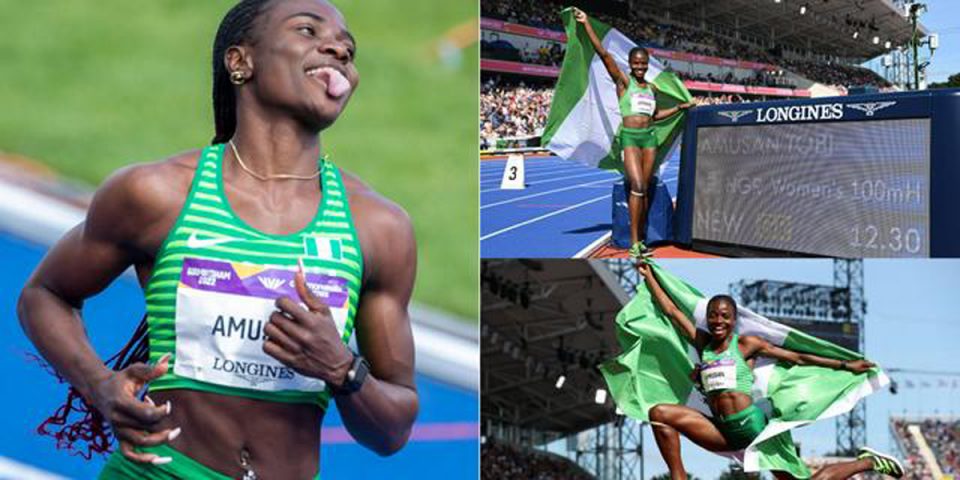 Nigeria’s Tobi Amusan has won the gold medal in the women’s 100m hurdles at the 2022 Commonwealth Games in Birmingham, United Kingdom.

The world champion successfully defended her title at the Alexander Stadium on Sunday in the women’s 100m hurdles final.

Amusan was able to run a Games record of 12.30s, setting other records as well, and becoming the first world champion to win gold and the first Nigerian athlete to do the same.

Having done it on another continent, Amusan made sure to replicate that fine display in Europe, proving that it was no fluke and that it was indeed her time.

The 25-year-old ran a blistering 12.30secs to claim the gold and also set a new Games Record in Birmingham.

“Honestly, I believe in my abilities but I was not expecting a world record at these championships.

“The goal is always just to execute well and get the win. So the world record is a bonus. I knew I had it in me but I could not believe it when I saw it on the screen after the semis.

“Before the final, I just tried to stay calm and to do my best. I took a deep breath knowing that I have some goals to accomplish and it worked pretty well. I knew it was very fast but not this fast,” Amusan said after her final victory.

Coming up behind here were Bahamas’s Devynne Charlton (12.58secs) who took silver and England’s Cindy Sember (12.59secs) who took bronze with both some notable distance behind the eventual winner.

With this result, Nigeria has now won 10 gold medals and 31 medals in total.

Team Nigeria are now just one behind the gold medal record set by the 1994 team (11 gold medals) at the Commonwealth Games and six behind the total medals record (37 medals).

With seven competitions still holding potential for gold for the team on the final day and World Athletics Championship silver medallist Ese Brume still in competition later today, Nigeria can and will hope for more.

As Ghana takes turn to trample on Nigerians