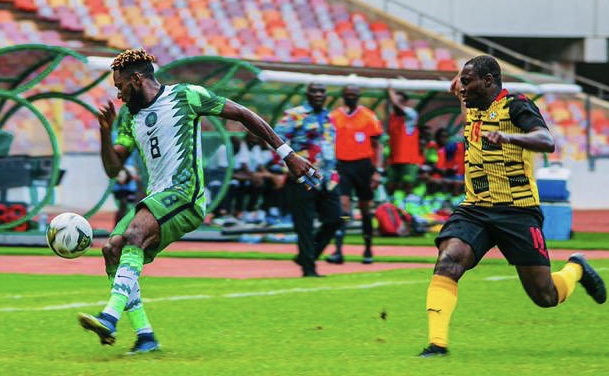 Ghana last night stopped Nigeria from qualifying for the 7th African Nations Championship (CHAN) scheduled to hold in Algeria next year with a 5-4 defeat in penalty shootouts in Abuja.

Barely five months after Ghana’s Black Stars similarly stopped the Super Eagles from qualifying for the 2022 World Cup in Qatar, lightning struck a second time on the MKO Abiola Stadium in Abuja as the Black Galaxies denied the home-based Eagles the chance to file out in CHAN 2023 next year.

The hosts had cancelled the 0-2 deficit they brought from Cape Coast last week in the reverse fixture in Abuja to drag the match into shootouts.

Two well-taken second half goals by Muhammad Zulkifilu and Chijioke Akuneto drew the fixture level and meant the lottery of penalties would decide the winner.

Substitute Maurice Chukwu crashed his kick, Nigera’s third penalty, against the crossbar in the shootout while Ghana converted all their five penalties to grab the ticket to the final.

Nigeria created a hatful of chances in a ferocious first half, but Babatunde Bello’s long-range shots either failed to find target or were punched away by goalkeeper Ibrahim Danladi, and free headers presented to Valentine Odoh and Zulkifilu were wasted.

The introduction of Akuneto in the second half brought more urgency to Nigeria’s game, and the Eagles B shot ahead in the 77th minute after Zulkifilu connected home gloriously from a pull-out.

With the seconds running out, in the fourth minute of time-added-on, Akuneto powered home after a corner kick was flicked into his path by Samuel Amadi for the goal that dragged the game into shootouts.

Coach of the Eagles, Salisu Yusuf was too shocked to attend the post match conference, knowing, perhaps, sun had set on his national team job.

Shutdown by GENCOS will impact negatively on economy—Entrepreneurs