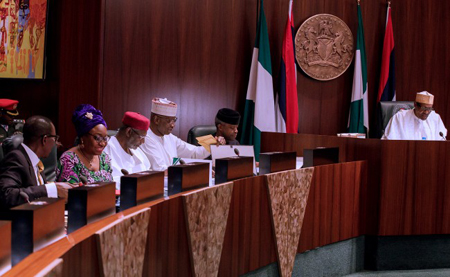 The Federal Executive Council(FEC) on Wednesday approved the sum of N970.2 million for the proving of residential accommodation for the Nigeria Customs Service(NCS).

Minister of Finance, Mrs Zainab Ahmed, disclosed this while briefing State House correspondents after the FEC meeting presided over by President Muhammadu Buhari.

The meeting lasted late into in the night.

Ahmed said that the accommodation was important because the NCS, being a para-military organisation, was trying to ensure that its members of staff were kept in barracks.

“The Nigeria Customs got approval today  for acquisition of residential accommodation for the staff of the service.

“What the Customs is acquiring is an estate that has a total of 42 flats and the total cost is N152 million per block of six units.

“The approval that we got today is in the total sum of N970.2 million inclusive of VAT.”

She said that the NCS, in its desire to upgrade its services to international best practice in information and communication, also got an approval to procure modern communication gadgets.

She listed some of the gadgets as HF radios, BHF radios, walkie takies, cable towers and accessories.

The minister said that the gadgets were necessary for the Nigeria Customs to enhance its end to end encryption of messages delivery to avoid tapping by unscrupulous elements, smugglers and their cohorts.

“The need has become necessary because of increased onslaught by the service on smuggling and other illegal economic activities.

“The contract that was approved is in the total sum of N247.907 million inclusive of five per cent VAT and the equipment will be delivered within a period of eight weeks.’’

Ahmed said that the third paper that was approved for the ministry was an automation project that it had been working on for a very long time.

According to her, the Project Lighthouse is an initiative of Ministry of Finance—a data warehousing system that is integrating different tax related data for the purpose of accurate and effective revenue assessment.

She said the project would also serve in the determination of assets and income status for both corporate and individual tax payers.

“It will help us improve on our tax revenue collection efforts both at the federal and states level.

On his part, FCT Minister, Mohammed Bello, said that FEC approved the award of contract for the construction of a secondary road linking the town of Dangara to Yaba within Kwali Area Council of FCT.

He said that the road was a continuation of the administration’s infrastructure development which covered the city itself and the surrounding satellite towns.

Bello said that the contract was awarded in the sum of N1.8 billion inclusive of five per cent VAT and timeline of 18 months.

The minister said that contracts were also awarded for supply of equipment and purchase of water tanker for some agencies under the FCT.

“The second projects is a project for the supply of heavy duty equipment for use by the Development Control Department of FCT under the Abuja Metropolitan Management Council.

“These equipment are used by the Development Control to effect needed adjustments to buildings and structures that have contravened set regulations particularly the Abuja MasterPlan which we all know is something that we guard jealously.

“The third approval was for the purchase of water tanker and water tenders-four each for the FCT Fire Service.

“ It is meant to improve of the complement of equipment and facilities that they have so that they will be in a better position to react to fire incidences so that there will minimal loss of life and damage to property,’’ he said.

Saraki vs EFCC: You are not above the law, EFCC tells Saraki

Lagos accounting for 70% of credit in Nigeria unacceptable – Moghalu