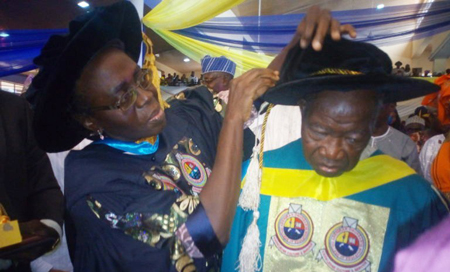 TBI Africa.com News Agency of Nigeria (NAN) reports that Jakande received the fellowship at the Joint Convocation of the institution.

Conferring the award, the Provost of AOCOED, Mrs Aina Ladele, said Jakande was honoured for his contributions to providing quality education for the state and his effort at moving the college to its present location.

She lauded Gov. Akinwunmi Ambode for increasing the college’s monthly subvention by 60 per cent since 2016, saying that the increase enabled the institution to pay staff salaries regularly and also cleared accrued pension deductions.

According to her, the college recently got full accreditation of its 31 programmes, trained over 400 staff through Advanced Digits Appreciation Programme for Tertiary Institution (ADAPTI) .

“Sixty-two academic staff hold doctorate degrees in different fields currently, the college has been ranked the best college of Education in Nigeria and 55th among 233 tertiary institutions across the Federation.

“The introduction of online payment and registration has reduced financial leakages, a number of TETFUND projects has been completed and now in use while the Department of Chemistry now produces and supplies the toiletries used in the college,” she said.

Ladele, however, urged the state government to assist in tarring the bad roads and open up the inaccessible parts of the college.

She also requested for the issuance of Certificate of Occupancy (C of O) for the land allocated to the college by the government in Oto-Awori since 2009 for accessibility to more land for infrastructural development.

“While we thank you for the approval of the 65 years retirement age for our staff, we seek your kind intervention and appeal for further increase in our subvention in order to pay some accrued staff allowances,” she said.

In his address, Gov. Ambode, represented by Mr Suarau Oluwatoyin, Lagos State Commissioner for Agriculture, congratulated Jakande and other distinguished personalities who received awards from the college.

“I understand that it is exceptional to be fellowship, diamond or alumni of AOCOED because of the stringent criteria for the selection.

“This undoubtedly speaks volumes about the credentials of the individuals for the honour. They are entering a hall of fame which is accessible to only a few and indeed the best in the society,“ he said.

Ambode also congratulated the graduands for scaling through the hurdles and crucibles of academic records to emerge triumphant and urged them to strive in all circumstances to retain and develop the scholastic attribute planted in them from the college.

He, however, noted that his administration was committed to prompt release of subvention, infrastructure improvement, teacher quality, improvement in quality assessment and other welfare packages for staff, among others.

Mr Tunde Samuel, Chairman, AOCOED Governing Council, said the college was due for upgrade to university status following its growth in terms of more quality students turn out, increased qualified human resources and infrastructural development over the years.

Samuel lauded the governor for his commitment to quality tertiary education services in the state.

“The uniformity in the tenure of the governing council members of all tertiary education institutions in the state is an equitable practice of driving improved institutional performance,” he said.

Receiving the award, Jakande said he was readily available for anyone who needed his services and advice.

He said it was his duty to still render services as an elder statesman and he was willing and pleased to do so.

“I am grateful to the college management for this award and I assure you that I would continue to support the course for quality education.

“I am also readily available for everyone who needs my services for it is my duty to do so, it my pleasure, please come anytime,” he said.

N100bn worth of bonds up for subscription on May 22-DMO

Igbos must work hard to get power in 2023 — Tanko Yakasai