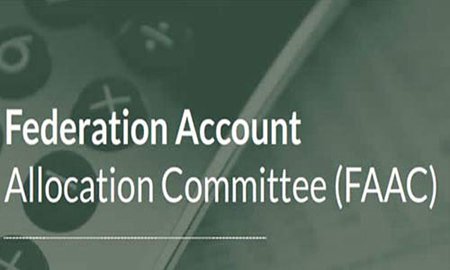 The Accountant-General of the Federation (AGF), Mr Ahmed Idris, on Tuesday said the Federal Government shared N616.19 billion as revenue generated in April to the three tiers of government.

The amount showed a decrease of about N1.37 billion from what was shared in March.

Idris, represented by the Director of Funds, Office of the AGF, Mr Mohammed Usman, said this at a news conference at the end of the monthly Federation Accounts Allocation Committee (FAAC) meeting in Abuja.

Giving a breakdown of the revenue accrued in April, Idris said that the mineral revenue increased by N56.8 billion, moving from N308.44 billion in March to N365.24 billion in April.

In addition, he said that the non-mineral revenue Increased by N15.46 billion, that is from N138.2 billion in March to N153.66 billion in April.

In addition, N46.25 billion, representing 13 per cent of the mineral revenue was shared to oil producing states.

Idris said that as at May 21, the money left in the Excess Crude Account (ECA) was 144 million dollars.===NAN

The consequences for their small community are disastrous. With acute social insight into the crisis of toxic masculinity and deep psychological penetration into one Midwestern family.