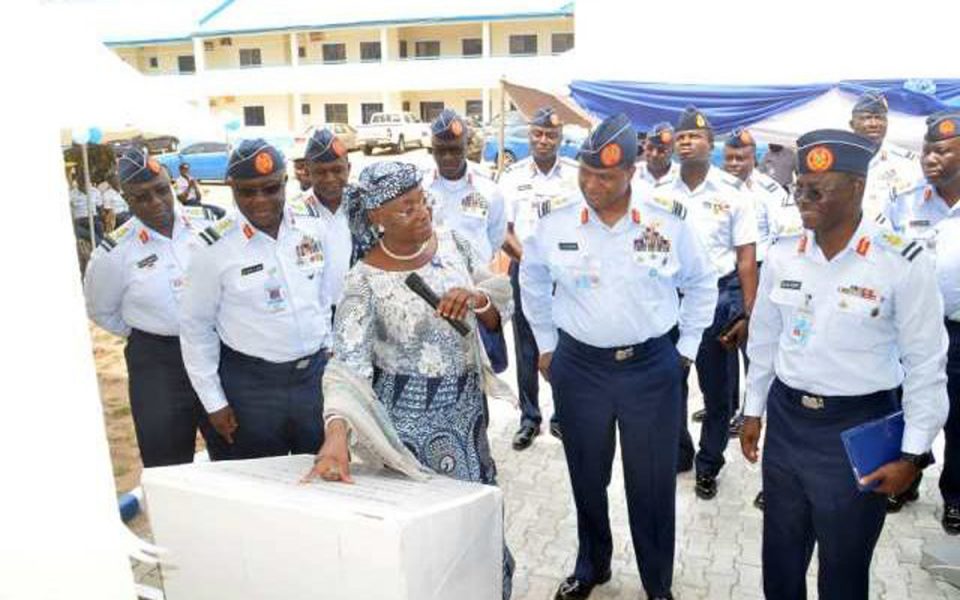 The Ministry of Defence (MOD) on Wednesday handed over a block of 20 single bedroom flats for Senior Non-Commissioned Officers (SNCOs) to the Nigerian Air Force (NAF).

NAF Director of Public Relations and Information, Air Commodore Ibikunle Daramola,made this known in a statement on Thursday in Abuja. Daramola said the new accommodation was in furtherance of the determination of the MOD to meet the accommodation needs of personnel of the Armed Forces for effective and efficient service delivery.

He said the new building, which is located at the NAF Base, Bill Clinton Drive, Abuja, was named after late Sergeant Adeoti Idowu, who paid the supreme price while on internal security operations in the Northeastern part of Nigeria on November 30, 2013.

Daramola said the Permanent Secretary, Ministry of Defence, Mrs Nuratu Batagarawa, attended the event. He quoted Batagarawa during the inauguration of the building as saying that the accommodation facility was executed in realisation of the Ministry’s desire to ensure that personnel of the Armed Forces of Nigeria (AFN) have befitting welfare packages.

She commended the military that continually devote their lives to safeguarding the sovereignty and territorial integrity of the nation.

Batagarawa said the MOD was determined to accord due attention to the well-being of troops and also continue to pursue welfare projects steadily, within the limit of available resources.

She added that the ministry of Defence recognised its complementary role in enhancing the efforts of the AFN.

She said the Ministry would continue to provide needed administrative and policy support for the AFN’s operations geared toward the realisation of the Administration’s determination to restore and entrench security in every part of Nigeria.

Batagarawa expressed her appreciation to the Chief of the Air Staff, Air Marshal Sadique Abubakar, for the cooperation extended to the Ministry by the NAF which aided the successful implementation of the project.

The permanent secretary charged the beneficiaries to utilise the accommodation conscientiously and urged them to reciprocate the gesture by renewing their commitment to duty.

The Chief of Administration (COA) Headquarters NAF, AVM Kingsley Lar, said the newly completed building and other projects awaiting inauguration by the MOD would go a long way towards ameliorating accommodation difficulties in the NAF.

He said it was remarkable that in the space of just four years the MOD had delivered an unprecedented number of completed projects for the NAF, which, he said, was a marked departure from what used to be the case.

Lar also noted that this feat was a testament to the current Federal Government Administration’s commitment to the welfare of personnel and their families.

The COA expressed the appreciation of the Service to President Muhammadu Buhari, for providing the necessary support and enabling environment that had facilitated the execution of numerous projects for the NAF. He said this had enabled the accomplishment of several operational feats.