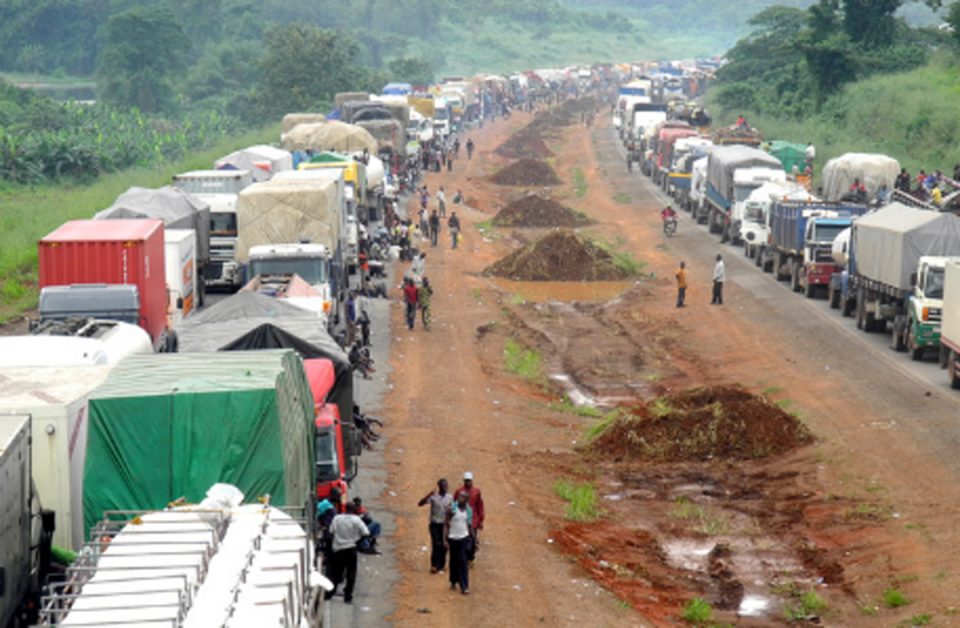 Vehicles, commuters and other road users were on Wednesday morning stuck on the long bridge linking Warewa with OPIC on the Lagos-Ibadan Expressway following the spillage of diesel by a fallen tanker.

The incident occurred toward the tail end of the Lagos-inbound route of the long bridge leading to long queues of vehicles coming into Lagos from other parts of the country.

Several road users who were travelling from Mowe, Ibafo, Asese, Magboro Arepo to resume works in Lagos lamented the condition they found themselves at a time they should have been at work.

Also those travelling from other parts of the country to Lagos and were caught up in the traffic web expressed their displeasure about the early morning accident on the long bridge.

Some officials of the Federal Road Safety Corps (FRSC) and other uniformed officers were on ground at the scene to control traffic.

They were redirecting vehicles from the normal six to less sensitive spots to avert further accidents.

The FRSC officials also stationed their vehicles as the various entry points into the Lagos outbound route to prevent drivers from driving against traffic.

Also, it was noticed that several drivers of other vehicles relying on their goggle map direction had to divert at Warewa to the alternative road to burst out at the OPIC-end of the expressway to continue their trips to Lagos.

It was observed that workers of Julius Berger PLC were on ground to clean the spillage from the road and to allow for free flow of traffic.

Also, men of the fire service were on ground to prevent fire outbreak during cleaning of the road of spillage from the fuel tanker.

It was thought that the cause of the traffic was the preparations by Julius Berger Construction Company’s workmen ahead of the upcoming construction on that section of the road.

It, however, turned out that it was caused by the spillage from a tanker.

Speaking with Clara Onabolu, a passenger in transit, she said the government should endeavour to create alternative roads for trailers and tankers.

“This is very terrible. I thought the traffic was as a result of the preparations for the construction along the express starting on August 3.”

Julius Berger Construction PLC had erected some signposts on both sides of the expressway informing commuters that it would start work on some portions of the Express road from August 3.

Onabolu added, “These tankers and trailers are our main problem in Lagos. The government needs to come up with new initiatives on how to take care of them. We can’t continue to suffer like this,” she said.

Another passenger, Mr Gbenga Ojo, said t the long bridge was like a puzzle which could not be resolved at first sight. “This road is very unpredictable. One minute it is clear, the other minute it is blocked for no just cause. You decide to go out and within the next 10 minutes when you are returning, everywhere is blocked.”

He said it might have taken Julius Berger’s workers long time to get the tanker off the express because it was not empty. “If the tanker has content, it is always more difficult to get it off the road,” Gbenga said.

Miss Ope Ajayi, a trader, also said the government needed to be up and doing and rescue people who ply the Lagos-Ibadan Expressway daily from such plights as this. “The government does not know the sufferings we are going through. This situation has ruined people’s day.

“There is always one problem or another on this road. At this time, we’re not at work yet that is exactly why people who have good jobs are relocating their families to better places.

“Imagine what the case will be when the real construction commences in few weeks. We can only ask God for His grace.”

Meanwhile, some commercial motorcyclists found their way to a secluded place under the bridge to siphon spilled diesel into kegs.