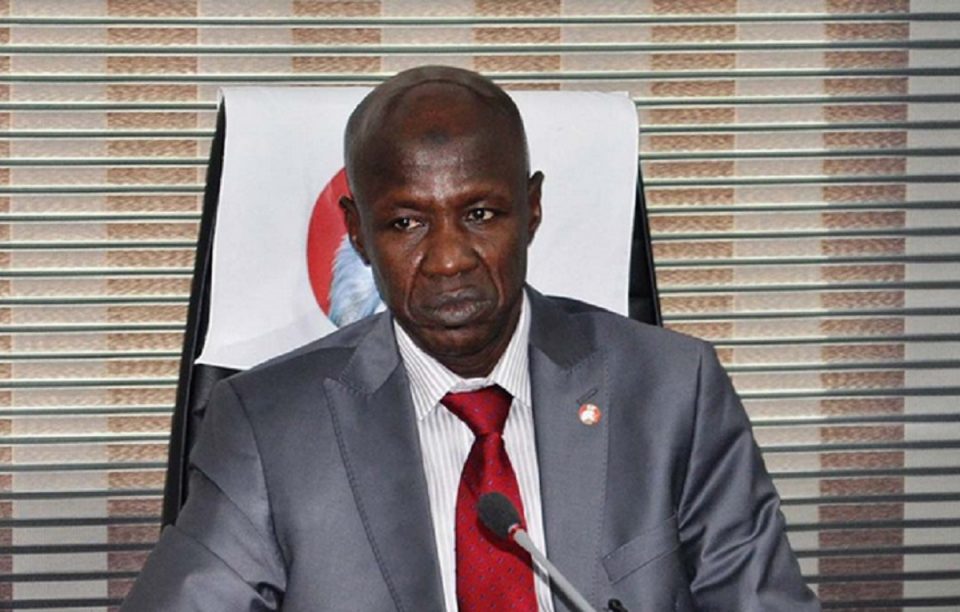 A high-powered plot to get President Muhammadu Buhari to replace Ibrahim Magu as Acting Chairman of the Economic and Financial Crimes Commission (EFCC) has hit the rocks, THE WHISTLER can authoritatively reveal.

The plot involved some prominent and influential persons within and outside the government, a serving state governor in the North East and some former state governors.

This website was informed that the conspiracy to get rid of Magu from the EFCC had been on for months but got fresh momentum after the death of Abba Kyari, President Buhari’s late Chief of Staff.

Kyari’s death, the paper was informed, had provided those involved in the underhand plan with an opportunity to directly carry their case to the President in the hope of convincing him to sign off on Magu’s replacement.

“The move was spearheaded by a governor from the north east who has been under EFCC investigation, a former governor from the south west and a few persons in and outside the government who’re not comfortable with Magu as the head of the EFCC,” a source privy to the plot revealed.

Recent reports on social media and some online platforms accusing Magu of corruption and of owning some choice properties at home and abroad appeared to have been orchestrated to help the case of those seeking his removal and make the decision easier for the President.

The schemers , who had already shopped for a replacement , had approached Buhari with the story line that Magu was incompetent to lead the anti-graft agency, citing the discredited DSS report allegedly indicting him for corruption and the refusal of the senate to confirm him to back up their claim.

But the plan blew to dust almost as soon as it got to the President who seemed to have his own opinion of what Magu had done with the EFCC.

According to multiple sources who confirmed the development, the President could not be convinced to buy the argument for the removal of Magu, and instead said he was satisfied with his achievements despite the obvious constraints against him.

“ They went to the President with their case but they couldn’t convince him; he said the man had done well and there was no reason to remove him,” a source confirmed, adding it was a narrow escape but a resounding victory for the acting EFCC chairman which could be pinned to his achievements.

Thus,  barring any last minute maneuvering, Buhari  is expected  to re-submit the name of Magu to the Senate for confirmation as EFCC Chairman any moment .

A civil society organisation, Initiative for Leadership and Economic Watch in Nigeria recently alerted the public of a “grand conspiracy”  by those contending EFCC Chairmanship position to remove Magu  in order to stop some of the high profile cases currently being investigated by the EFCC.

The group said in a statement by its Secretary, Abubakar Ibrahim, that those fighting Magu “were former governors who stole from their respective states as governor for 8years” and were now using their influence and positions to fight him.

Magu was appointed as acting EFCC chairman shortly after Buhari became president in 2015. He was highly recommended as a no-nonsense operative who was instrumental to the success of Nuhu Ribadu when he was at the helm of the anti-graft agency.

Since his appointment, the EFCC has recovered billions of naira and properties which have been forfeited to the federal government. Between 2015 and 2018 alone, the EFCC recovered not less than N871 billion looted funds and 407 mansions, among others.

In 2019, it recovered additional N8.5 billion in cash and assets from public officials investigated for corruption.  Between 2015 and 2019, the EFCC was able to secure not less than 1,900 convictions.

These include some high profile convictions of former state governors such as Joshua Dariye, Jolly Nyame and Orji Kalu which was recently ordered for retrial by the Supreme Court.

The EFCC had also become more involved in fighting cybercrimes and internet fraud and recorded huge successes in this area, making the country a no-go area for cyber criminals.

Oil theft allegations: Aiteo says it got short-changed alongside FG of 16 million barrels by Shell