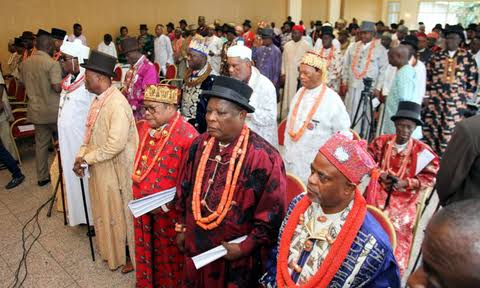 Some Bayelsa monarchs under the auspices of Paramount Rulers Forum for Oil Host Communities in the Niger Delta, have commended President Muhammadu Buhari for the ongoing forensic audit of the Niger Delta Development Commission (NDDC).

The monarchs made the commendation in a letter to the president dated June 22, a copy of which was made available  in Yenagoa on Sunday.

They appealed to the president to intervene in the planned probe of the Minister of the Niger Delta Affairs, Sen. Godswill Akpabio, and the Interim Management Committee (IMC) of the NDDC, by the National Assembly.

The traditional rulers also urged the national assembly to halt the planned probe of the minister, pending the conclusion of the forensic audit.

They said those calling for the probe of Akpabio and the Prof. Kemebradikumo Pondei-led interim management committee, were bent on diverting attention and sweeping the probe under the carpet, by truncating and frustrating it.

The letter was signed by 21 First-Class and Second-Class monarchs, including Consul Oluku, the Ibedawei of Akassa Kingdom; Gabriel Okiakpe, the Pere of Gbanraun; and Paul Seide, the Ibedawei of Bilabiri Kingdom.

Other signatories include D.D.A. Akpele, the Amayanabo of Sangana and Alfred Perekebina, the Central Coordinator and Convener of Paramount Rulers, among others.

The stated: “Our reasons for supporting you Mr President is that the NDDC was established based on the agitations of the riverine Niger Delta oil host communities who demanded resource control from the Federal Government.

“The resultant negotiations gave birth to the NDDC with the sole mandate of delivering empowerment and infrastructural development (projects) to the oil producing areas whose people are impoverished.

“However, the erstwhile NDDC officials failed to empower and develop the areas as mandated, but siphoned, diverted and embezzled money amounting to several hundreds of billions of naira to enrich themselves, leaving the people in a state of perpetual poverty level till date.

“We, therefore, agree totally with your Excellency for your thoughtfulness and the appointment of the IMC to provide every detail about the NDDC for the forensic auditors to show proof of where the monies allocated to the NDDC in the last 20 years are kept while we are dying in abject poverty.

Mobolaji Johnson, one of true fathers of Lagos — Tinubu

ANC chairman to state: Seize land from those with over 12,000 hectares