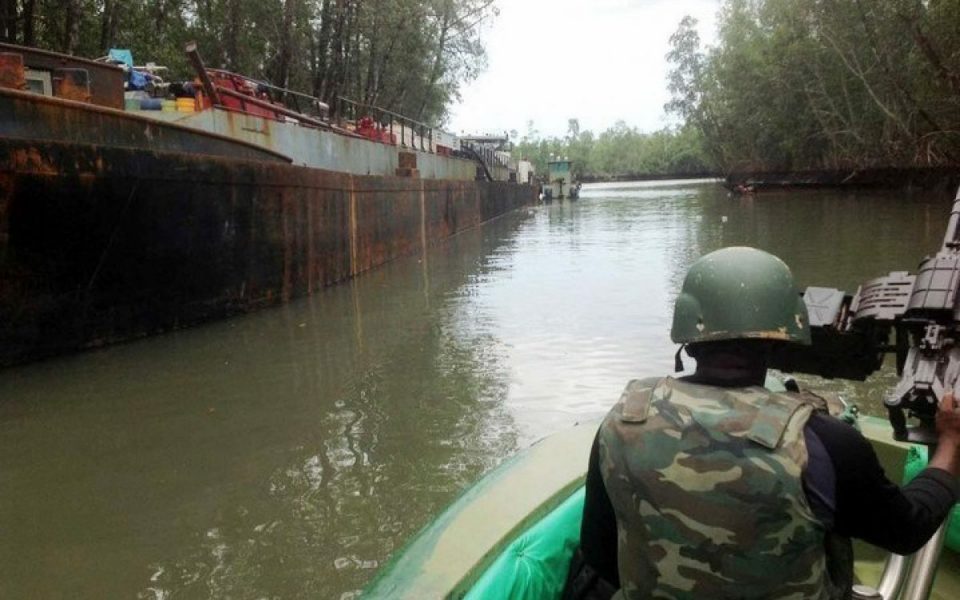 Two vessels engaged in illegal bunkering and laden with over 320 metric tonnes of automotive gas oil (AGO) have been arrested by the operatives of Nigerian Navy attached to the Western Naval Command in Lagos.

The vessels it was learnt were arrested during the sea maneuver by the Western Naval Command, code named OPERATION CALM WATERS, initiated by the force to rid the waterways of illegal bunkering and oil thieves.

Admiral Daji who was represented by the Fleet Commander of the Western Fleet and Officer in Tactical Command of OPERATION CALM WATERS, Rear Admiral Danjuma Moses said the crew members and the vessel are presently in naval custody

The vessels, he said, were intercepted by the new Nigerian Navy attack boat, the NNS OSE which was deployed alongside other vessels to police the back waters during the operation.

He said: ” Operation which was flagged off by the Flag Officer Commanding Western Naval on Friday, July 24 2020 in the course of carrying out statutory responsibility of protecting the Nation’s maritime domain in Western Naval Command Area of Responsibility.

“This was done in order to sustain the gains of previous Operations and Exercises which the Command has conducted in the past.

” The efforts form part of the Chief of the Naval Staff, Vice Admiral Ibok-EtteIbas’ Operations Objectives of his Strategic Directive.

“In the last eleven days, officers of the Command intercepted and interrogated two vessel of interest observed to have been engaged in suspicious movements. One of the vessel was once intercepted, boarded and searched by NNS NGURU on 17 Jun 2020 at the Atlas Cove Single Buoy Mooring area.

“Furthermore, narrations of one the ship’s captain on the voyage of the vessel were inconsistent with its movements, that was tracked” he added.

Admiral Moses said based on the operations posture of the Western Naval Command underlined by the foregoing successes against perpetrators of criminality within the Nation’s maritime environment, restated the resolve of Flag Officer Commanding that the Nigerian Navy will not rest on it oars to provide necessary conducive environment for law-abiding members of the public to carry out legitimate maritime-related businesses.

“May I further request that as partners in progress, members of the public are free to divulge credible information to units in your localities to enable it get rid of all forms of criminality” he said.

We will continue to fight against smuggling — Customs chief