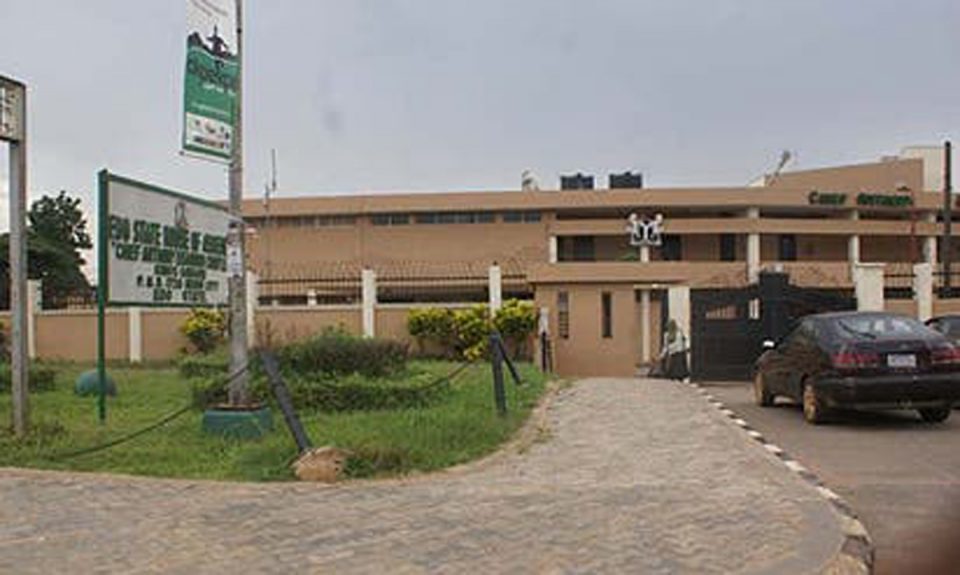 More violence appeared to be looming on Sunday  in Edo State as factions in the state House of Assembly sharply  disagreed over the proposed sitting of the 17-member faction of the legislature.

The 17-member faction  of the state House of Assembly  on Sunday said  it  would  sit in the  Assembly building, which is being repaired by the  state government.

The factional Speaker, Victor Edoror, who stated this in an interview with The PUNCH on Sunday, described the renovation of the Assembly as unnecessary, saying the 17 lawmakers  would access it and sit there.

But the other faction, in an interview with The PUNCH, said the sitting being proposed by the  Edoror-led group  was comical and wondered what it would represent.

Recall that 14 members-elect, who had not been sworn in since 2019 when the House was inaugurated,  on Thursday, were  joined by three other lawmakers, who had declared support for the All Progressives Congress governorship candidate, Pastor Osagie Ize-Iyanmu.

The 14 members-elect were sworn in and together with the three other members reportedly impeached the Speaker, Frank Okiye, and elected Mr Victor Edoror, as his successor.

Prior to the emergence of the factional speaker,  there  had been tension  at the Assembly as armed policemen were deployed there as early as 7am.

The governor, Godwin Obaseki, later went to the Assembly where he addressed his supporters.

Shortly after the governor and Okiye’s departure,   artisans ostensibly acting on government orders, removed  the roofs of the building and used granites to block the gates.

The crisis in the state started last year when the APC was divided into  two factions with one loyal to the state governor and the other consisting of supporters of the immediate National Chairman of the party, Adams Oshiomhole.

In June, Obaseki defected to the Peoples Democratic Party  and emerged as the candidate of the opposition party following his disqualification from the APC governorship primary.

In the interview with The PUNCH, Edoror said if possible, the 17 lawmakers would access the Assembly building and sit there.

He stated, “The House of Assembly is our property. We are not under his (governor’s) appendage. We are an independent  organ. The governor, in the name of renovation, cannot disturb our proceedings.  If it is possible, we will go there and sit. However, our inability to access the complex will not hinder the legislative process in the state. We will continue to sit for the people.”

We are not out to impeach Obaseki — 17  lawmakers

He, however, stated that the lawmakers were not out to impeach Obaseki, whom he said had committed an impeachable  offence.

He said: “We have the number and if we have the time as permitted by the constitution, we can achieve that (impeach the governor) but we don’t have that in mind. We are not out for Governor Obaseki or his deputy, Philip Shaibu. We are not being sponsored by anybody to victimise anyone. What we have been fighting for is that constituencies making up Edo State should be duly represented in the House.

“The constitution says that 24 must be represented in the House to be able to sit. Section 91 of the constitution of the Federal Republic of Nigeria states that, ‘For an assembly to be inaugurated in any state, the minimum members must be 24 and maximum 40’. Even if one member dies before inauguration, the death certificate must be made available.”

“So inaugurating nine Assembly members is an impeachable offence, but we are not looking at that. We don’t want to destabilise the state. The governor must do the needful by obeying the rule of law.”

Dismissing the proposed sitting by the other faction, Okiye said such an action was a Nollywood activity that would have no bearing on the legislative duties in the state.

He said, “I don’t know what their sitting represents. I still maintain they are acting comic scripts, it’s a Nollywood activity. I don’t have to respond because it goes to no issue. What can the order from there enforce?

Okiye also dismissed his impeachment on Thursday as a non-issue.

He said there was no need to bother himself about such an action, describing those who carried out the unlawful exercise as dissidents.

He stated, “If you have the fact, this is a non- issue. I cannot bother myself when a group of dissidents got together somewhere and said the speaker had been impeached. I won’t lose sleep over that.

“The main worry I have is why three members that are still members of the House allowed themselves to be deceived by going to somebody’s sitting room and organising  a parliament.”

Okiye noted that while the ‘embattled’ members were still his friends, all of them were no longer members of the House considering that they were not available for their legislative functions even after several attempts to bring them in.

He described as unfortunate the action of the Attorney General of the Federation and Minister of Justice, Abubukar Malami, which seems to be giving legitimacy to the group led by Edoror.

Malami had in a letter written to the Inspector-General of Police, Mohammed Adamu, directed the IG to provide security to the 17 lawmakers to enable them to perform their legislative duties.

The minister’s letter was in response to the one  written by the 17 lawmakers seeking his intervention as the chief law officer  of the country to enable them to perform their functions.

Faulting the AGF, Okiye stated, “I want to believe that Malami acted in ignorance but the letter that approached him for this assistance didn’t include the details of the case. Malami is not a magician to know everything that transpired. As a learned gentleman and giving the status of his office, we believe that he would not ordinarily do that if he is faced with all the facts.

“I wrote to him to let him know the truth and that he should not allow himself to be used. So we have reminded him of the fact and there is no way you expect him to allow that kind of action to stand.

“I think they would have realised that a mistake was made. In a constitutional democracy, nobody has the sole right to the country. We all subscribe to the country by birth and nobody can take full charge. It is our collective belief that can make the country stand as one.”

But   Obaseki, in an interview with journalists in Benin on Sunday,   said that it was difficult to accept change in the country.

While urging people to stay calm as the September 19 election draws near, the governor said the opposition should exhibit confidence in its conduct rather than waging a war and massive propaganda.

He said there was no need putting fear into the citizens and stopping people from exercising their right by coming out to vote on election day. He said such tactics would not give the APC success.

The governor’s special on media, Crusoe Osagie, in an interview with The PUNCH,  described the 17 lawmakers’ planned session as “a town hall meeting.”

“It doesn’t matter whether they sit or not. What is important is that they are not lawmakers.They are lawmakers-elect who did not come for inauguration and their seats were declared vacant. And they went to court to challenge the vacant declaration of their seats.

“It is not a meeting of legislators. Whatever decision they take is irrelevant and null and void and it will amount to nothing,” Osagie noted.

Meanwhile, the PDP caucus in the House of Representatives has alleged that the APC  is planning to unleash mayhem on the people of Edo State “and dubiously take over governance of the state.”

The leader of the PDP caucus, Mr Kingsley Chinda, in a statement on Sunday, condemned the  police over their role in the Edo State House of Assembly crisis.

He especially criticised policemen “who stormed the state from Abuja to forcefully take over the assembly complex which is undergoing renovation.”

Chinda also condemned the IG and the Minister of Justice and Attorney-General of the Federation,  for allegedly instigating the attempt to impeach the Speaker, Mr Frank Okiye.

According to the lawmaker, as highest ranking law officers, they should be seen to be keeping peace and order and not otherwise.

Chinda stated that the attempt to remove the Speaker was through the back door, describing it as a clear case of desecration of the institution of the legislature and an affront to the people of Edo and Nigerians.

He  called on Obaseki and the people of Edo to stand up to the challenge and resist all attempts to cause crisis in the state and truncate democracy.

He asked, “Why would lawmakers meet at an undisclosed location and claim that they have impeached the Speaker of the House all in a bid to ensure the removal of Governor Godwin Obaseki through unconstitutional means?”

The caucus leader also questioned the rationale behind the involvement of the police.

He added, “Why would the police be receiving instructions from Abuja to brazenly trample upon the sanctity of the institution of the legislature as if we are in a Banana Republic where might prevails over the rule of law? This is not acceptable and must be condemned in its totality.”

He also called on the immediate past National Chairman of the APC, Adams Oshiomhole, and all his supporters as well as the APC-led Federal Government to “exhibit maturity, greater candour and a true sense of responsibility as well as check their actions and those of their supporters in order not to instigate any electoral violence that will inflame and consume democracy in Edo State and indeed Nigeria.”

But the Chairman, Senate Committee on Judiciary, Human Rights and Legal Matters, Senator Opeyemi Bamidele, described the actions of Obaseki against the state House of Assembly as unlawful, subversive and a threat to democracy in Nigeria.

The senator, who spoke to journalists in Ado Ekiti, implored the civil society community and other stakeholders of the political process in Nigeria to prevail on the Edo governor “to allow members of the Edo State House of Assembly resume their constitutional duties without further delay.

“Of course, the National Assembly must also stand up decisively at this point for the Edo State legislature and for Edo people if the governor makes it impossible for the state House of Assembly to function.”

On his part,  the APC Deputy National Publicity Secretary, Yekini Nabena, in an interview with one of our correspondents,  said the minority members of the House of Assembly and their sponsors could not stop the majority from sitting.

He said, “We all know that the APC has the majority in the Edo State House of Assembly. They all won their elections and were issued certificates of return. None of them has a pending case, they have formed a quorum whenever they sit. Democracy is about majority rule, the minority cannot change that. We are focused on returning Edo State to the APC family, the PDP cannot distract us.”