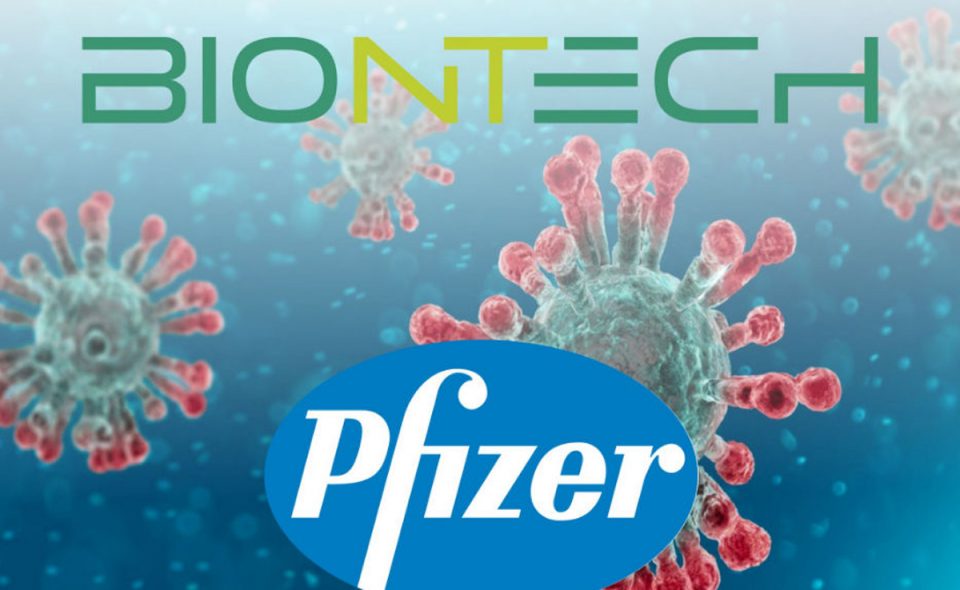 Oil prices jumped by almost 10 per cent yesterday for its biggest daily gain in more than six months after Pfizer announced promising results for its COVID-19 vaccine candidate and Saudi Arabia said an OPEC+ oil output deal could be adjusted to balance the market.

Pfizer and BioNTech had said yesterday that a vaccine they jointly developed is 90 per cent effective in preventing COVID-19 infections in ongoing phase 3 trials.

The message of hope instantly drew applause from the world audience, bringing the United States President, Mr. Donald Trump, and the President-elect, Mr. Joe Biden, to their first convergence in recent months, as both congratulated Pfizer on its scientific trial.

President Muhammadu Buhari also waded in, welcoming the development and expressing the hope that the vaccine would be available for all when it finally hits the market.

America’s Pfizer and its German partner, BioNTech, will produce 1.3 billion doses of the vaccines for 650 million people by the end of 2021.

Both contracts rose by more than $4 earlier in the session.

Nigeria’s 2021 budget was predicated on an oil price of $40 per barrel and daily production of 1.86 million barrels.

Reuters quoted analysts as saying that “in the eyes of oil traders, a vaccine will help ensure no future lockdowns are needed and will bring people back to the streets, allowing road and air transport to recover.”

Saudi Arabia’s Energy Minister, Prince Abdulaziz bin Salman, also said the OPEC+ deal on oil output cuts could be adjusted if there was consensus among members of the group.

The Saudi minister was commenting after being asked whether OPEC+ – which groups OPEC states, Russia and other producers – would stick to existing cuts of 7.7 million barrels per day (bpd) rather than easing them to 5.7 million bpd from January.

Key members of the Organisation of the Petroleum Exporting Countries (OPEC) are wary of U.S.

President-elect Joe Biden relaxing measures on Iran and Venezuela, which could mean an increase in oil production that would make it harder to balance supply with demand.

Analysts have also hinted that while a Biden presidency increases the likelihood of Iranian oil supply returning to the market, this is not something that will happen overnight.

America’s Pfizer and its German partner, BioNTech, are expected to produce 1.3 billion doses of the vaccines for 650 million people by the end of 2021.

Eight months into the worst pandemic in a century, the development represents the most encouraging scientific advancement so far in the battle against COVID-19.

And its preliminary results pave the way for the companies to seek an emergency-use authorisation from regulators if further research shows the shot is also safe.

The vaccine findings are based on an interim analysis conducted after 94 participants, split between those who got a placebo and those who were vaccinated contracted COVID-19.

Pfizer Senior Vice President, Mr. William Gruber, said: “The trial will continue until 164 cases have occurred. If the data hold up and a key safety read-out also looks good, it could mean that the world has a vital new tool to control a pandemic that has killed more than 1.2 million people worldwide. This is about the best news for the world, the United States and for public health. It was better than even the best result we had hoped for.”

The Chief Executive Officer, BioNTech, Ugur Sahin, said: “With effectiveness for the first vaccines previously expected to be in the range of 60 per cent to seven per cent, more than 90 per cent is extraordinary. It shows that COVID-19 can be controlled. At the end of the day, it’s really a victory of science.

“The data do have limits. For now, a few details on the vaccine’s efficacy are available. It is not known how well the shot works in key subgroups, such as the elderly. Those analyses haven’t been conducted. And it isn’t known whether the vaccine prevents severe disease, as none of the participants who got COVID-19 in this round of analysis had severe cases.”

The vaccine is being tested in a two-dose regimen. The trial started in July and since most participants only received their second dose much more recently, nobody knows how long any protection will last.

However, the strong reading from the first large-scale trial to post efficacy results holds well for other experimental vaccines, in particular, one being developed by Moderna Inc. that uses similar technology.

Pfizer expects to get two months of safety follow-up data, a key metric required by US regulators before an emergency authorisation is granted in the third week in November.

If those findings raise no problems, Pfizer could apply for authorisation in the US this month.

A rolling review began in Europe last month and Sahin said regulators there are working with BioNTech to “further accelerate the process.”

The positive preliminary data mean the US pharma giant and its German partner are on track to be first with a vaccine, after signing advance deals with governments worldwide for hundreds of thousands of doses.

Meanwhile, the companies have said they will produce 1.3 billion doses, enough to vaccinate 650 million people, by the end of 2021. Only 50 million doses are expected to be available in 2020.

However, Pfizer has found itself drawn into a contentious political debate about how quickly regulators in the US should allow a vaccine to be given to Americans.

President Donald Trump had pushed to have a shot approved before Election Day, but regulators put in place rigorous standards that largely pushed that goal out of reach.

On October 16, Pfizer Chief Executive Officer, Albert Bourla, had said the companies could seek an emergency use authorisation from US regulators by late November if the trial results were to show the shot is safe and effective.

Writing in an open letter, Bourla quelled fears that Pfizer might be racing the clock to bring out a vaccine before the presidential election.

Pfizer and BioNTech have a $2 billion deal to supply 100 million doses to the US, with an option for 500 million more. Among the frontrunners, theirs is the only vaccine project that did not take funding from the White House-led Operation Warp Speed programme to bolster research, development or manufacturing. BioNTech received up to 375 million euros ($445 million) in development funding from the German government, however.

Moderna is considered the next closest vaccine frontrunner. It has said it could get safety and efficacy data from its late-stage trial this month. Johnson & Johnson, which has a one-shot vaccine using a different technology could get efficacy data from a final-stage trial by the end of this year. AstraZeneca Plc is also working on a vaccine using different technology, with results from studies in the U.K. and Brazil expected by year-end.

Biden, who inaugurated a COVID-19 taskforce yesterday said: “I congratulate the brilliant women and men who helped produce this breakthrough and to give us such cause for hope.”

But he cautioned it is “important to understand that the end of the battle against COVID-19 is still months away.”

The president-elect said the announcement was “part of a previously announced timeline by industry officials” and that it does not alter the fact that “Americans will have to rely on masking, distancing, contact tracing, hand washing, and other measures to keep themselves safe well into next year.”

The World Health Organisation (WHO) and the Canadian government have hailed Pfizer and BioNTech’s announcement.

While the Director-General of WHO, Dr. Tedros Ghebreyesus, described the news as “encouraging,” the Prime Minister of Canada, Justin Trudeau, said the results were “promising.”

“We welcome the encouraging vaccine news from @Pfizer & @BioNTech Group & salute all scientists & partners around the world who are developing new safe, efficacious tools to beat #COVID19,” WHO’s director-general said in a tweet.

“The world is experiencing unprecedented scientific innovation & collaboration to end the pandemic,” he said.

As of mid-October, the WHO has identified 42 “candidate vaccines” at the stage of clinical trials, up from 11 in mid-June.

Ten of them were at the most advanced phase three stage, in which a vaccine’s effectiveness is tested on a large scale, generally tens of thousands of people across several continents.

WHO’s Chief Scientist, Soumya Swaminathan, also said in a tweet yesterday that the news from Pfizer and BioNTech should “encourage all developers of #COVID19 vaccines to continue with clinical trials.”

Trudeau, at a news conference, called the results “promising.”

“We see the light at the end of the tunnel,” he said.

The prime minister said he expects the vaccine to be distributed to Canadians “most likely in the first three months of 2021.”

“But,” he added: “There is a lot of uncertainty involved in these processes.”

Canada signed a deal with Pfizer and BioNTech in August for a minimum of 20 million doses of their vaccine.

Trudeau noted that the Pfizer-BioNTech vaccine poses some “logistical distribution” challenges, including that it must be stored at very cold temperatures and, therefore, getting it to Canadians will be “more complex and slightly more limiting.”

“We are already working on those necessary logistical supports,” he said.

Trudeau added that testing of several other vaccine candidates was “progressing well” and some of those could be rolled out in early 2021 too.

In Nigeria, President Buhari last night hailed the delivery of the first COVID-19 vaccine after a period of a successful trial.

Senior Special Assistant to the President on Media and Publicity, Malam Garba Shehu, in a statement, said the president, in his reaction to the news that the vaccine had completed 90 per cent trial, described the feat as a milestone in medical advancement.

He called for a sense of unity in the distribution of the vaccine with a view to guaranteeing the protection of the entire world.

“Reacting to the news that the vaccine has recorded 90 per cent effectiveness against the disease, the president described the development as a major milestone in medical advancement but warned that the world must unite in facilitating the equitable access and distribution of these vaccines to protect people in all countries.

“President Buhari reiterated his earlier call that ‘only a people’s vaccine with equality and solidarity at its core can protect all of humanity and get our societies safely running again. A bold international agreement cannot wait.